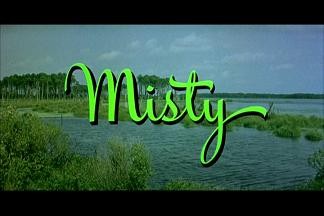 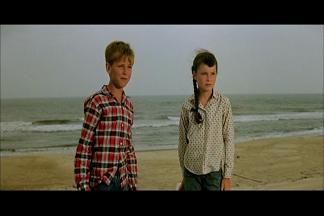 Koch Vision's DVD cover art for their release of the 1961 children's movie Misty proclaims the above in large lettering on the back. While I can't honestly say that I've read the book (and obviously can't judge how well the film adapts it), I'll trust the rave customer reviews on Amazon's web site that suggest it is a well-remembered classic - and hope this modest effort to adapt the novel would satisfy readers with fond memories of it.

What strikes me about Misty, the movie, is that it's clear I'm viewing it nearly five decades after its production. The movie has a sweet innocence that seems quaint by today's standards. That's not necessarily a criticism; in fact, it's one of the movie's driving charms. Misty has a straightforward story that's told with deliberate pacing. The camera is allowed to linger for (gasp!) longer than four seconds on its panoramic settings, and the characters are unassuming and earnest, simple and hardworking "folk." There's neither postmodern film referencing nor humorous nods to the adults here.

Misty tells the story of children Paul (David Ladd) and Maureen (Pam Smith). They live with their grandparents on a horse farm assumedly upon coastal Virginia. On the nearby island of Chincoteague, a band of wild ponies runs about, and every year a Pony Penning Day occurs, where locals round up some of the horses and herd them to the mainland. Paul and Maureen dream of catching the Phantom, a wild horse their late father was interested in. They settle, instead, for Misty, Phantom's colt.

While Koch's cover art emphasizes horses and nature, the movie is really about Paul and Maureen. They're likeable kids, and their hard work to slowly collect the money to purchase the Phantom in the first half of the movie offers a valuable lesson in savings and goal setting. At the risk of spoiling the ending, this movie also demonstrates the old adage if you love something, set it free.

This is the early 1960s, and sexism rears its head (no pun intended) from time to time. Some contemporary viewers might bristle at Maureen's treatment. She's not allowed to participate in the Pony Penning Day, a major sequence in the film, because it's not a job for "womenfolk." And while she'd like to race horses, she ultimately acquiesces to Paul in a major race sequence in the second half of the movie. Still, the girl does have some spunk to her, and she's a partner in most of the rest of the kids' exploits, so all is not lost.

All in all, it may be old-fashioned, but I think Misty would still be well-received by the young today. Recommended for families with small children. 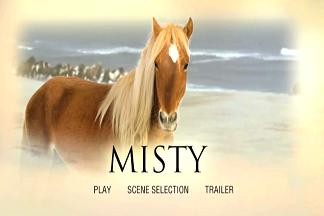 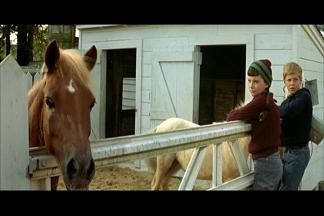 Koch Vision gives Misty an anamorphic widescreen presentation in a 2.35:1 aspect ratio. While colors seem a little faded and details not so sharp, I suspect that this movie looks about as good as it ever has on home video, given its age and previous full frame releases.

The lone audio track is an English language Dolby Digital 2.0 mono affair. It does its job dutifully, as dialogue is always clear, but that's about all that can be said for it.

A trailer for Sounder precedes the main menu. There's no link to it in the menu itself, but a Trailer option provides access to a full frame trailer for Misty.

And that's it for extras, which is a shame. A commentary track, even by a historian, would have been nice to listen to.

Slow-moving and deliberate, the 1961 production Misty is a nicely-crafted if dated children's movie with expansive pastoral cinematography, two earnest lead characters, and lots of wildlife, especially horses. Recommended for families wishing to expand their home video libraries beyond the usual suspects from Disney and Pixar.