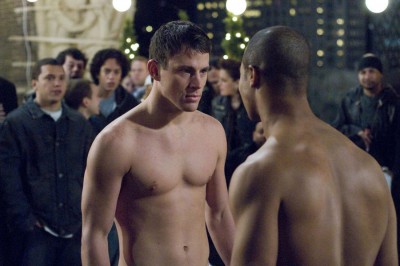 A few years back, writer/director Dito Montiel crafted "A Guide to Recognizing Your Saints." It was a flawed but beautifully impassioned picture that isolated a feisty independent film spirit, embroidered with improvisational acting and Montiel's commitment to emotional authenticity. "Saints" came from the heart. "Fighting" is the more studio-minded follow-up, which also attempts to deploy Montiel's gritty sense of emotional honesty, only this time it's in service of a brain-dead motion picture that blends the filmmaker's aesthetic interests with an insultingly formulaic screenplay, and it's all frosted with overwrought performances that should've been tightly leashed from the get-go.

A homeless kid with a laundry list of troubles, Shawn (Channing Tatum, "Step Up") is recognized by small-time hoodlum Harvey (Terrence Howard) as a powerful brawler, capable of handling himself well with any incoming threat. Talking the young man into joining an underground fight club circuit, Harvey entices Shawn with the promise of money, leaving the slightly dim hoodlum willing to pit himself against New York City's finest street fighters. Along the way, Shawn finds himself drawn to Zulay (Zulay Henao), a vulnerable single mother who allows the brute a sense of peace. As the combat escalates, so do the cash prizes, leaving both Shawn and Harvey anxious to find out how far they can push their luck.

Dito Montiel never stood a chance with "Fighting." Eager to revisit the same bag of tricks that made "Saints" an impassioned memory piece, Montiel's filmmaking choices are all wrong for a story that should've rightfully been filmed in 1985 and starred a young, dewy Jean-Claude Van Damme.

Montiel is looking to conjure a seedy, roughhouse New York City, using the inherent danger of the Big Apple's rotten corners as a backdrop to Shawn's self-imposed isolation. It's a batch of identifiable sights and sounds that Montiel also visited in "Saints," only here there's a cartoonish underworld element added that scrapes away whatever authenticity the director is on the hunt for. "Fighting" is quick to assume an exaggerated criminal posture, with bad guys in dark suits making angry faces at our heroes. It's the type of keyed up urban depiction that's found on any basic cable crime show, yet Montiel dances furiously to mold his setting into a memorable community for Shawn and Harvey to build a relationship within, looking for travelogue N.Y. details (corner shops, food stops, and local color) that anchor the feature back in reality.

Montiel's efforts to massage some plausibility into the film are constantly thwarted by the screenplay, which doesn't contain a single surprise and treats absurd melodrama like a new toy. The characterizations are a mess in "Fighting," further trampled by a lifeless performance from Tatum, who can't seem to break his reliance on one-note brooding and pouty staring to craft a performance. Howard's a bust too, killing his momentum by adopting an unhelpful Woody Allen accent. However, Howard deserves credit for trying something new, unlike Tatum. Montiel demands the audience take pity on these characters and cheer their fight to stave off poverty, but the steps to personal salvation are either painfully Crayola (Shawn has daddy issues) or greatly truncated (Shawn and Zulay's worthless romance is pulled out of thin air). The rest of the narrative is a smear of gangster clichés, head-slapping collisions of coincidence, and shirtless Tatum scowling. One has to wonder how a homeless street fighter has the time and tools to shave his entire upper body on a daily basis.

"Fighting" makes room for fighting about every 30 minutes, following Shawn as he brawls with an assortment of foes pulled straight out of an insipid video game. Again, contrast Montiel's gritty strut with the exaggerated, bass-heavy fisticuffs and "Fighting" might leave you thoroughly confused. The director does mastermind a few brutal moments of combat guaranteed to raise heart rates, but the melees are short-lived and unsettlingly concluded. I'm not sure of this was an intentional choice by Montiel, but he-man Shawn appears to win his fights purely through accident, never natural ability. "Fighting" further insults intelligence with the creation of a lifelong rival for Shawn in the character of Evan (a goofily snarling Brian J. White), a schoolyard bully entity nobody asked for, threaded arbitrarily throughout the film for a bloody-knuckled payoff that never quite arrives.

The punches certainly fly fast and furiously in "Fighting." It's only too bad a few weren't reserved to knock Montiel out of his delusions with this dim, often insufferable urban melodrama.