Other // Unrated // May 25, 2009 // Region 0
List Price: $29.95 [Buy now and save at Americanfilmfoundation]
Review by Chris Neilson | posted May 5, 2009 | E-mail the Author
Only one medical school in the United States specializes in training doctors to treat combat casualties. One quarter of all uniformed U.S. Armed Forces doctors and 80% of all doctors who complete a 20-year military career are graduates of that one school, yet it has repeatedly been threatened with closure by federal budget cuts. That school is the Uniformed Services University of the Health Sciences (USU), located in Bethesda, Maryland. 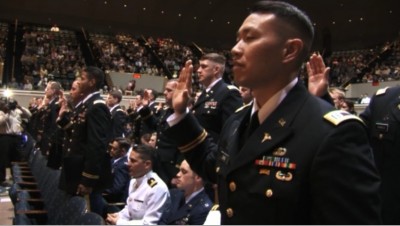 Two-time Oscar-winner Terry Sanders (Maya Lin: A Strong Clear Vision) spent two years making Fighting for Life which blends coverage of the USU class of 2010 in classroom and field training environments with coverage of USU graduates treating casualties at a combat field hospital in Iraq, a surgical center in Germany, and a rehabilitation center in Maryland.

Fighting for Life is an apolitical documentary that takes no stance on the Iraqi war itself. Sanders' only apparent agenda is to make a persuasive case for the importance of the USU's mission by detailing some of the sacrifices made by the young American soldiers in blood and limbs, and the heroic efforts of the USU-trained doctors who save those soldiers' lives and try to restore them as best they can.

Sanders and his crew enjoyed great access to locales and personnel throughout, from a concrete-hardened triage center in the combat zone, to state-of-the-art operating rooms in Germany, to a gymnasium-sized rehabilitation center in the States. Sanders shows us the horrors of war in graphic detail. Many of the wounded have been disfigured by road-side bombs which mangled limbs and burned skin. The wounded are American and Iraqi soldiers, but also Iraqi civilians caught in the crossfire.

Fighting for Life is presented without narration and the camera work is loose and spontaneous. This is both the film's strength and its weakness. The documentary is refreshingly guided by the events and people with a minimum of contrivance, but there's also a sense that the pacing and editing don't fully succeed. The film starts strongly enough with medical students at the OSU campus, but once the film has moved on to the twisted and broken bodies of war, returning to the OSU students doing mock field exercises drains away much of the film's emotional charge.

Presentation
Video:
Fighting for Life was recorded on digital video and is anamorphically presented in its original aspect ratio of 1.78:1. Image quality varies a bit with softness being the most frequent problem, but overall quality is good for an independent documentary of this nature. Colors are slightly muted, but consistent.

Audio:
The 2.0 DD audio is above average with dialogue almost always clear and steady. Subtitles are not offered.

Final Thoughts:
Fighting for Life is first and foremost an advocacy film for the importance of the Uniformed Services University of the Health Sciences' mission of training military doctors, but it also offers very fine coverage of the men and women who serve in the American Armed Forces - those who risk their lives on the battlefield, and those caregivers dedicated to saving lives and restoring health, often under arduous conditions.

Refreshingly apolitical, Fighting for Life is recommended viewing for everyone.