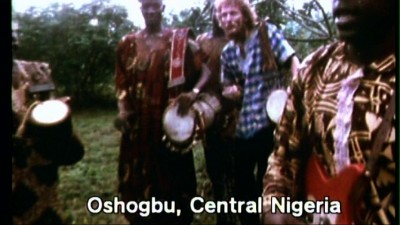 All You Need is Love is a groundbreaking 17-part British television series tracing the history of popular music in the 20th century. Released in 1977, the ground zero year of punk, its production seems strangely prescient now, as if the series curator, director and editor Tony Palmer (Frank Zappa's 200 Motels), had only just managed to preserve the history in the nick of time, just as the barbarians were breaking through the gate to tear it all down.

The opening DVD release of the series, God's Children: The Beginnings, serves as volume 1, despite being labeled as episode 2 on the disc itself. The inside packaging shows the covers for 16 discs, including this one, which is a bit of a conundrum. From what I can tell, there are so far a handful of the series episodes released as cheap stand-alone items, but if you want all 17 installments, the 5-disc boxed set is the way to go. I note this as a caveat emptor up front, because from what I gathered from watching God's Children, this is a series worth delving into all the way, each episode building on the other, the complete picture only forming when all the pieces come together. One disc simply won't do.

The style of All You Need is Love holds little surprise, but its tried-and-true methodology is an asset, not a drawback. Scholarly talking heads--including critics and professionals--are punctuated by vintage audio and video footage, as well as performances filmed for the program. The historical approach means Palmer must reach back beyond the confines of this century, exploring the origins of specific rhythms and drumming styles that came out of Africa, and how that tied into the evolution of gospel and folk music amongst slaves. This inevitably spills into how the white culture influenced the music, including how the black people would hide the meanings of the songs or smooth out elements that might have caused trouble amongst the ruling whites.

It's this cross-cutting that really interests Palmer, and he seeks out all the connections. African American spirituals have much in common with the storytelling tradition of the rural songs of whites, and those songs themselves also date back to British roots. Palmer's central idea is that music changes and evolves as it travels, and he wants to understand why, be it through political and cultural influences, social mores, or just artistic progression. He uses great performances by local musicians as well as more famous artists, editing this footage together with examples of cultural rituals, ranging from African ceremonies to rodeos of the American South. Eventually, he shows how blues developed out of one side of the experience and gospel out of another, and both had the similar purpose of forgetting one's troubles, even if the approaches were at odds. Eventually, white entertainers appropriated black music, first through minstrel shows and then more direct homogenization, inevitably leading to African American musicians altering their delivery for a larger audience. This also goes full circle, with African musicians integrating American styles in their works. As illustration of this, Palmer gives us performances by both Fela Kuti and Cream-drummer Ginger Baker playing with African musicians.

On hand to comment on the history are folks like Jerry Wexler, a famous producer and A&R man once credited as "the inventor of R&B" John Hammond, a record producer who worked with Billie Holiday; Nigerian professor and drummer Tunji Oyelana; writer Amiri Baraka (a.k.a. LeRoi Jones); and Tina Turner, who ends the episode with surprising words about her own impressions of Africa.

It's an intriguing start to what overall looks like an excellent series. The next two volumes promise dissections of ragtime and jazz, and future entries focus on the Beatles and glitter rock. I can't think of a more exhaustive scholarly study that both tells us where the music comes from, but also was prescient enough to keep the music at the forefront, letting it speak most eloquently for itself. 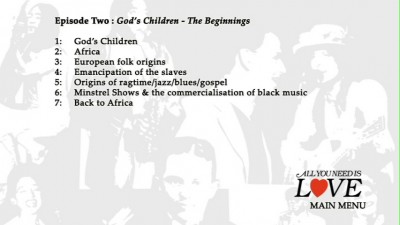 Video:
Surprisingly for the age of this program, it was filmed in a 16X9 format, and is thus presented here as an anamorphic transfer. The image quality is pretty damn good all things considered, though it does show its age, looking like an old television program with sometimes fuzzy edges and washed-out colors; still, it's remarkably well preserved, and the vintage quality makes any faults forgivable.

Sound:
The original soundtrack is mixed in basic mono, and it is also fairly clear for its source and age. There is some distortion, but that is likely just a problem of the old masters and not any fault of the DVD production.

Extras:
No extras are on the main disc, but this volume comes with a second disc that is meant to serve as an introduction to the All You Need is Love series. This is a 53-minute program, just like the other episode, and as it starts, a title card labels it as episode 1. I'm a bit confused, though, as the voiceover refers to the DVD boxed set, and the entirety of the program here consists of clips to illustrate what we will see later. Is this truly the first episode, or a trailer put together for DVD? I am not sure, and even the manufacturer's website, http://www.voiceprint.co.uk, doesn't clear it up.

FINAL THOUGHTS:
Recommended. All You Need is Love is an excellent program, and one likely to please just about any fan of 20th-century music. The quality of information and the rarity of the performances that illustrate the documentary's points are incredible. In this episode alone, you see people as far apart in time and place as Duke Ellington, Lightnin' Hopkins, Ray Charles, and Fela Kuti. This episode, titled God's Children: The Beginnings, is also only the second of seventeen, which is why I haven't ranked it higher. The full set is probably a better purchase. Still, if you want just a sample, this is it. 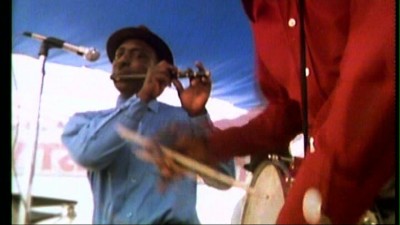