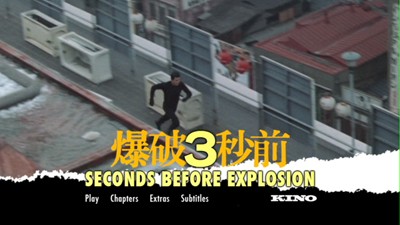 Film buffs love a B-movie that can get the job done, but for all of the celebrating we do of the unexpected artistic merits of these cinematic underdogs, it's also good to remember that sometimes a B-picture really is the cheap and flimsy thing it was always intended to be.

Such is the case with 3 Seconds Before Explosion, a 1967 Japanese crime movie from director Motomu Ida and starring pop idol Akira Kobayashi, who also starred in Black Tight Killers and later in The Yakuza Papers. Though 3 Seconds has an underlying anarchic spirit worthy of its title, destroying typical story convention with every other scene change, that spirit largely stays under the surface, keeping the movie from flaring into the fun romp it should have been.

The plot of 3 Seconds Before Explosion is a bit of a story pretzel, but let me see if I can undo the knot. The Maguffin of this piece is a pile of uncut jewels that the Japanese government stole from the emerging Rabaley nation following World War II. (No, I don't know who the Rabaley are supposed to be either.) The government who lost the jewels has put a statute of limitations on them, and so within a matter of days, they will be free and clear, belonging to whomever possesses them. Two criminal factions vie for the prize. One is a group led by Takashima (Takashi Kanda), a businessman who currently has the booty and wants to hang onto it. He is targeted by Uezaki and Komiya, a couple of baddies who are trying to put the treasure in the hands of a Nazi smuggler, who, when not speaking in stiff, poorly rehearsed German, defends the honor of the ladies he abuses in an accent that sounds vaguely like it's from the American South.

Secret agent Yabuki (Kobayashi) is tasked to stop any of this from happening. The movie actually starts with his origin story, a strange sequence where we see he is a street thug who is browbeat and tortured into accepting his law-enforcement job. Years have passed, and Yabuki has turned into a real badass, and so he's assigned to make sure that no one gets their hands on the Rabaley jewels. Making this difficult is Yamawaki (Hideki Takahashi, Fighting Elegy), a former agent that Yabuki once knew and who is now a security man for hire, working for Takashima. Yabuki infiltrates Uezaki's gang, but Yamawaki also has a girl spying on the baddies, a nightclub singer named Nana (Katsue Takaishi). She's one of several expendable females in this movie; expect a Chinese prostitute and Takashima's daughter also to head toward an untimely death. Motomu Ida and writer Shuichi Nagahara (A Colt is my Passport, Godzilla: 1985), working from a novel by Haruhiko Oyabu (the same writer who provided the source material for Detective Bureau 2-3: Go to Hell Bastards), have little time for romance. A classic love triangle between Nana, Yabuki, and Yamawaki sticks its head out of the sand, and we eventually find out that the Chinese hooker loves Uezaki, but these are just footnotes that get in the way of the games boys play. Better to shoot her down rather than have her spoil the adventure. 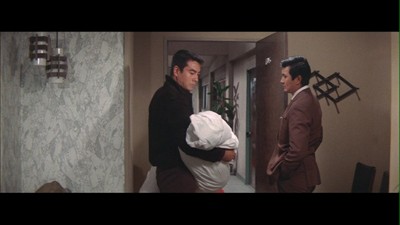 The bulk of 3 Seconds Before Explosion is a shell game, where Yabuki sorts out where Yamawaki has moved the jewels, he tells Uezaki, Nana then informs Yamawaki that his rivals know, and so Yamawaki moves the bounty yet again before the gang gets there. Amidst this, we get a variety of shootouts, a little blood (including an hilarious use of chunky red stuff in a dynamite blast), and surprisingly, a lot of standing around. You can laugh at how many times Yabuki waltzes in and out of the hands of the criminals, but by the time he plants a bomb in the jewels, it's too late to even question why he sets the timer for the exact Rabaley deadline rather than just blowing them up there and then. I guess Ida had to justify that great title somehow.

I don't know, though, for me it just comes off as too reserved, too stiff in its errors. Though fun can be had, the narrative hiccups of 3 Seconds Before Explosion seem less like a devil-may-care flaunting of storytelling convention and more like a matter of no one really caring whether it makes sense at all (I stop just shy of branding it "incompetence"). It feels a little too by the numbers, regardless of whether or not the regular numbers have been erased. Where is that crazy, twitchy Akira Kobayashi from that Prisoner-style opening? Where is the lust and the blood? Sure, we get retro '60s style, with decked-out sets and clothes--Uezaki's gang has a guy in an army uniform and one wearing a fez, just for the hell of it--and even the expected nightclub performances, but as the back-and-forth of the jewel chasing drags on, that stuff doesn't prove interesting enough to sustain the full 84 minutes.

Like that title suggests, the movie gets close to a great conflagration, but not quite. 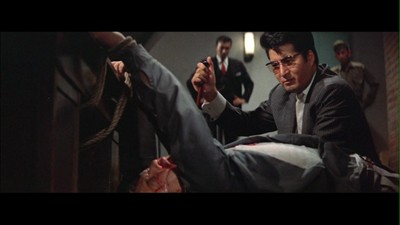 Video:
The new anamorphic transfer preserves the 2.35:1 aspect ratio, as well as the original colors and look of the movie. The image is crisp, with a fantastic palette, and outside of a few very minor occasions of surface scratches and some fuzzy edges, nothing really to complain about.

Sound:
The Japanese soundtrack is mixed as a serviceable mono track with optional English subtitles.

Extras:
There isn't much. There is a short stills gallery featuring shots from 3 Seconds Before Explosion, and two trailers for other Japanese crime movies: Cops vs. Thugs and Yakuza Graveyard.

FINAL THOUGHTS:
Rent It. 3 Seconds Before Explosion gets close to the mark, but it falls short. A stiff production makes the ludicrous plotting seem leaden rather than having fun with it, and despite its cool retro style, the movie always seems to stop for a breather right when it could really turn up the heat. A decent cinematic distraction, but a B-picture through and through. 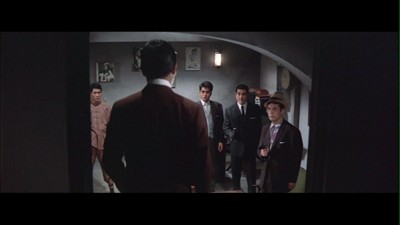