Lionsgate Home Entertainment // PG // May 26, 2009
List Price: $39.99 [Buy now and save at Amazon]
Review by Stuart Galbraith IV | posted May 18, 2009 | E-mail the Author
A pretty dreadful fish-out-of-water comedy, New in Town (2009) is the kind of movie where, if you've seen the trailer, you've seen all there is to see. It's also the kind of movie where, if within the first ten minutes you can't tell exactly where its story is heading and how everything will end up, you're not paying attention.

It's a premise as old as the moon: circumstances send an oh-so-sophisticated and cultured urbanite into unsophisticated, uncultured, and eccentric rural America. The kuntry folk are alternately shocked and bemused by the protagonist's alien ways and vice versa, but simple Plain Folks humanism eventually wins out in the end - and the hero/heroine from the Big City invariably chooses to make a fresh start there - after first saving everyone from certain disaster.

It's a tried-and-true story - not long ago I reviewed a very similar picture from 1932 called The Purchase Price. Probably several hundred similar films (at least) have been made in-between, and yet another variation of the same basic concept is of itself not unwelcome. But New in Town relies on very obvious jokes and broad regional stereotypes that flatter none of the characters, and it has an over-the-top, formula sentimentality Frank Capra himself would have found shamelessly schmaltzy. It plays very much like its writers used a template out of one of Syd Field's How-to-Write-a-Screenplay books and did little more than fill in the blanks.

The Lions Gate Blu-ray disc serves its purpose but is unremarkable. There's a fair amount of supplementary material, but with pictures like this you have to wonder: Is anyone out there really interested? 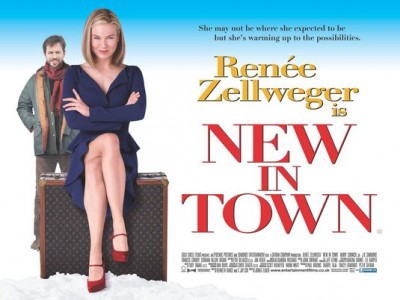 Super-ambitious Lucy Hill (Renée Zellweger), food company executive living a glamorous life in Miami, is sent by her company, Munck Foods, to New Ulm, Minnesota (played by Winnipeg, Manitoba) to oversee the restructuring of its manufacturing plant and a 50% reduction of its workforce. An indicator of the type of birdbrain humor to come, though it's apparently November or early-December, Lucy naively assumes she won't need any warm clothes, and is appalled by the bitterly cold weather (downwards of 50-below zero) and blinding snow. Later she insists she knows how to light a fire in a fireplace, but then asks where the switch is. (Yes, I know it's supposed to be a joke; I just didn't find it very funny.)

New Ulm is the kind of small town Hollywood movies always imagines them to be; one has to admire the restraint of the filmmakers in not putting The Bells of St. Mary's on the local theater's neon-lit marquee. Broad stereotypes abound: locals enthuse about snickerdoodles, polka, ice fishing and Jesus and say painfully folksy things like, "Oh for cryin' in the beer cheese soup!" and "Okey dokey artichoky." Instead of capturing Midwestern eccentricities along the lines of Fargo, New in Town depicts most of the New Ulm's residents as mentally deficient.

After some early friction with plant foreman Stu Kopenhafer (J.K. Simmons), union rep Ted Mitchell (Harry Connick Jr.) and painfully Ned Flanders-ish secretary Blanche (Siobhan Fallon Hogan), bitchy Lucy slowly begins to warm up to the local yokels. Predictably, a romance blossoms between Lucy and widower Ted, especially after she gives his 13-year-old daughter a big city makeover. Out of the blue, Munck Foods decides not to modernize the plant after all but shut it down entirely, but by then Lucy has seen the light and decides to "risk it all" to save the community she now loves.

New in Town has little to recommend it. In the first-half of the picture, Renée Zellweger's character is unappealingly condescending - the hip city girl looking down on the unwashed masses. There's a feeble attempt late in the picture to explain her character's relentless ambition and need for success, but it doesn't excuse her blatant rudeness and superior attitude. The New Ulm residents are no better: Ted is a hothead, Stu is immediately adversarial with Lucy, and Blanche is simply dense with no social skills.

The film's comic attitude is pretty rudderless, a mishmash of crude and suggestive sight gags (Lucy's nipples, erect from the cold, cause much embarrassment), obvious jokes relating to Lucy's difficulties adjusting to life, and unjustified Capra-corn. Lucy's transformation isn't dramatized well and happens more because that's what always happens in these pictures rather than due to specific events in the story. The actress herself tries hard, but as written the odds are too much against her.

Released theatrically in 1.85:1 spherical wide screen, New in Town here gets a 1.78:1 1080p presentation that's up to current standards, but visually has little of interest, except maybe for some blizzard scenes that appear faked with CGI trickery. The 97-minute film offers 7.1 DTS-HD Master Audio, but except for some nice directionality with the audio here and that, it too is unremarkable. French 5.1 Dolby Digital track is included, along with English and Spanish subtitles.

Supplements include a BonusView PIP commentary with the cast and crew (writers Kenneth Rance and C. Jay Cox, and actors Fallon Hogan and Simmons), which automatically defaults to audio-only on older players; some deleted scenes, all in high-def; and three featurettes, also in high-def, of questionable interest: "How Cold Was It? It Was Sooo Cold...!" Making 'New in Town' in Winnipeg, Canada (18 minutes), "Tapioca & Food-Fighting Fun" Pudding's Delicious Role in 'New in Town' (six minutes), and "Scrappers of America, Unite!" The Folk Art of Scrapbooking (just shy of eight minutes). The first is typical VAM ("value-added material"), with a strong emphasis on the extreme temperature; the latter two sound like jokes, but aren't.

The disc includes something called MoLog. According to the box text, it's "the first BD-Live application that allows users to insert and animate shapes, text, audio, and other graphics right into the film to create 'blogs' to share with other MoLog users." MoLog requires Profile 2.0 Blu-ray players for full access (I couldn't), while BonusView requires 1.1 or better enabled players.

Though I had seen the trailer and knew I was in for a predictable night at the movies, I was still hoping for an agreeable Local Hero or Fargo-type sensibility. But this movie pretty much lost me at "Hello." Rent It.