Life Is a Bed of Roses 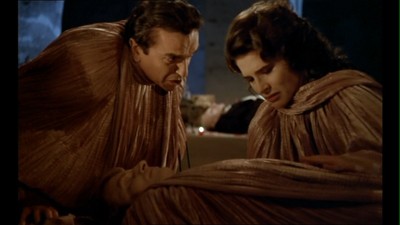 Is life a fairy tale?

That seems to be the thematic question driving director Alain Resnais and writer Jean Gruault's ambitious 1983 release, Life is a Bed of Roses. Two people answer that conundrum at the end of the picture, citing two different sources and giving two different answers, leaving it to you to judge whom you believe. Personally, I cast my vote for neither.

Life is a Bed of Roses is an ambitious film, weaving three story lines together, filtering them through one castle in the Ardennes. The construction of the castle was undertaken just before the first World War, a project put together by the idealistic Count Forbeck (Ruggero Raimondi), an optimist who hoped to create a mini utopia where all who chose to live in his community could be happy. War changed all that, though, taking many of his construction-site collaborators from him and, as far as he's concerned, also causing him to lose his lover Livia (Fanny Ardant) to a dashing soldier (André Dussollier). If we're being generous, we can chalk Forbeck's blindness up to his idealism. Had he been looking, he would have seen Livia was never his.

Flash forward to the 1980s, and the castle still stands, even if the kingdom it was meant to serve never materialized. A school has now taken over the building, and for the weekend, visiting scholars are taking over the school to hold a symposium to explore how to use a child's imagination to ignite a child's education. Among the attendees are an Italian ladies man, Guarini (Vittorio Gassman); Robert (Pierre Arditi), an expert at child's play; Nora (Geraldine Chaplin), an American anthropologist; and provincial teacher Elizabeth (Sabine Azema), whose proposition for an interactive diorama is not only the most realized idea offered at the seminar, but it also connects back to the model Forbeck creates of his utopia. Elizabeth is an idealist who believes in true love, and so Nora conspires to make her fall for Robert, seemingly the most incompatible of the male teachers, to teach the woman a lesson in the transience and irrationality of human emotion.

Forbeck also believed in true love, and in a plot worthy of a Wong Kar-Wai film, the main part of his story features a post-War gathering at his castle where he convinces a group of admirers to drink a potion to wipe away their memories. Presumably, this is partially revenge (if he can't have love, no one will) and possibly to make Livia forget the soldier and become available to him again. His stated ruse is that by wiping out all past pain, he can give his friends true happiness. A similar goal is sought in the third story line, a costume fantasy where a brave warrior (Jean-Claude Corbel) is fighting to free his people from their enslavement under a tyrant. This plot is connected to the three children who are still at the school when the visitors come, and they believe Forbeck's castle to be much older. This fantastic world is full of bright colors and outrageous art direction (comics artist Enki Bilal is credited as part of the art department), and the dialogue is sung, a habit that also creeps into the other stories from time to time. 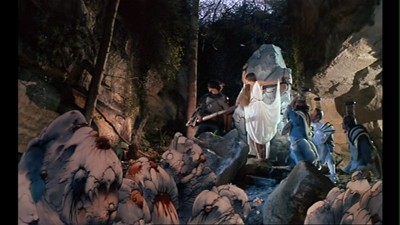 The medieval fantasy receives the least screen time, with the modern story taking the most. It is said that Resnais modeled his three stories on other filmmakers--specifically Georges Melies, Marcel L'Herbier, and Eric Rohmer--and it's clear that each separate element is meant to represent specific concepts. It's no surprise that the crusader saves his kingdom, and that the child's made-up world is the only one where true happiness comes. The adult world is full of compromise and bitter sacrifice, as well as petty emotional games, and so Forbeck fails miserably and the imaginative educators only find conflicted results.

Sorry to say, as a film, Life is a Bed of Roses is just as conflicted. This is clearly a film more concerned with ideas than narrative development, and so most of the stories seem half-baked. The Forbeck tale is the closest to being fully realized, following a specific dramatic arc and having the most firm ending. (It also doesn't hurt that Fanny Ardant is so radiant as Livia). The children's fantasy is barely there, despite the fact that in all the cross-cutting, it's the one most organically integrated; scenes of the children at play often roll into scenes of mythology. As for the last story, Resnais and Gruault seem content to pack the gathering of teacher's with ridiculous concepts and not at all concerned with tying them into the rest. Elizabeth has a whole subplot about her mother being ill that has no payoff, Guarini's motivations are conveniently fluid and cliché, and Nora's underlying jealousy is only cursorily developed. The only aspect of that story that has any real weight is Robert's relationship with his son and his discontent with the stifling educational policies at the school. Pierre Arditi is a little obnoxious, but he plays the clown fairly well, and soon the dorky antics give way to some real pathos--and given that it's drama expressed through action rather than dialogue, that's all down to the actor.

I suppose Life is a Bed of Roses is a case of a filmmaker wanting to do too much, and so ironically, he does too little. To hit every ambitious mark, Alain Resnais had to let the finer details slip by. I could have easily enjoyed this film trimmed down to be the Count Forbeck tale rather than wading through the other stuff to get back to what I really wanted. I admire Resnais' intent, but I'm not so keen on the results. 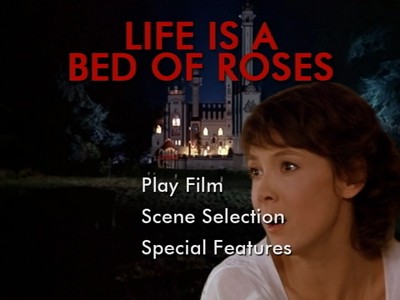 Though the Life is a Bed of Roses DVD actually came out in 2008, this copy of the movie was sent out for review in anticipation of Kino's bundling of four of Resnais' 1980s movies into the boxed set Alain Resnais: A Decade in Film. From what I can tell, these are the exact same discs, just now in a box. DVD Savant reviews the set here.

Video:
The 1.66:1 anamorphic transfer on Life is a Bed of Roses maintains the original aspect ratio, and the DVD looks fairly good. The colors are vividly rendered, and there is little by way of image damage. You will notice a slight bit of ghosting, but it's not so bad as to ruin the viewing experience.

Sound:
A basic Dolby mix of the French audio sounds very good, with attention paid to the elaborate music. The tonal qualities are fine, and there were no glitches and no extraneous hiss. The optional English subtitles were nicely done, paced at a readable speed and clearly displayed as white text.

Extras:
Kino provides us with the original theatrical trailer for the movie, as well as a half-hour television program, "Resnais est un Roman," made for the release of the film. It features Resnais sharing his theories on the movie and filmmaking, shows on-set footage, and talks to crew members and actors about Life is a Bed of Roses.

FINAL THOUGHTS:
Rent It. Though Kino is celebrating the Alain Renais renaissance that came in the 1980s, supposedly kickstarted by this particular film, I'm finding his cinematic intellectual exercises a little tedious. There is much to like in Life is a Bed of Roses, and also much not to like. The scales never really tip, it kind of all hangs there in the middle, but still, that is not really a ringing endorsement. These three tales spliced together endeavor toward a single point, but never quite get there. Life is a Bed of Roses is like controlled chaos, like someone planted those roses and deliberately riddled them with weeds. Which sounds fine, until you realize that, as the viewer, you're the one whose going to have to pull those weeds out. 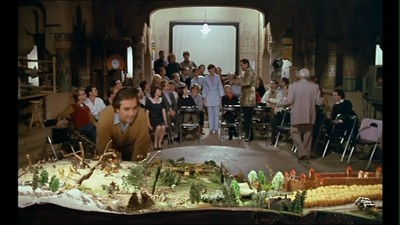