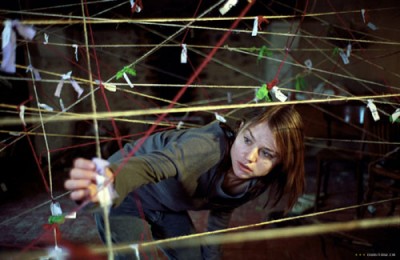 While viewing the French chiller "Fissures," the 2000 time-warping thriller "Frequency" sprung immediatley to mind as its Hollywood counterpart. Both films use fantastical means to explore the murder mystery genre; they head to the edge of complete and utter lunacy with outlandish plot developments, only to shoot the tube of absurdity with the grace of a pro surfer. Certainly it takes a few mouthfuls of suspension-of-disbelief pills to settle in with the peculiar mood of "Fissures," but it doesn't take long for the sheer invention of the filmmaking to seep through the sludgy illusion, making for a perceptive, engaging thriller.

Reeling from the murder of her estranged mother, Charlotte (Emilie Dequenne, "Rosetta") has returned to her family home to sort through the estate and piece clues together. A nature documentary sound technician, Charlotte spends her days questioning the nasty and arrogant locals about her mother's activites, and nights tinkering with her tape machines. During a session, Charlotte picks up strange sounds that are immediately revealed to be memories of past interactions with her family and her mother's private life, with specific spots in the house containing different encounters. Learning about her mother's history as the reluctant town clairvoyant, Charlotte grows to understand her estrangement from her family, while finding valuable leads for the murder case along the way that start to consume her every thought.

It's an imposing task for a young actress, but "Fissures" rests almost entirely on the shoulders of star Dequenne. Born with an expressive face built for shattering cinematic response, Dequenne delivers a pure miracle of a performance, selling the bejesus out of both the core mystery of the story and its odd fantasy decoration. Writer/director Alante Kavaite exploits Dequenne's soft features wonderfully, pushing the actress through the wringer of emotional consciousness, deftly capturing the myriad of intricate reactions. With the narrative out there on the fringes of believability, Dequenne's committed performance solidifies the viewing experience with her determination to express exquisite astonishment with the borderline sci-fi antics. It's a perfect, elevating piece of casting.

With most of the film focusing on the nuances of sounds and bodily concentration, Kavaite is eager to preserve a compelling visual scheme for Charlotte's hesitant investigation within a community of belligerent suspects. The best screen concept surfaces from the sound positions within the home, which Charlotte connects with string to create a literal web of memory trajectories ornamented with personal objects and copious notes. It's a dandy bit of illustration that imparts captivating character development (Charlotte's misery doesn't just emerge from the murder, but also the knowledge of the time she lost with her mother), critical spatial relationship, and a superb parallel of obsessive self-destruction.

Being a Euro import, the anamorphic widescreen (2.35:1 aspect ratio) image is a smeary, overtly contrasted mess. With black levels that tend to glop and muted colors, there's not a whole lot here to recommend, yet the moist, autumnal locations still shine through, making scenery bleak and memorable. With most of the action left to the ears, it's hard to get riled up about image quality on this title.

The 5.1 Dolby Digital sound mix takes great care of the specialized atmosphere of the film, leading with nuanced sound cue reproduction. Dialogue is crystal clear, keeping the whispers as available as the yelling. Rural landscapes also provide a chance for the surrounds to add a special breezy environment. A 2.0 track is also provided.

A Theatrical Trailer is available.

Whodunit? Well, I was rather amazed to find myself growing less and less interested in the murder mystery progress during the course of the movie, drawn more to the potent psychological content. Kavaite does a marvelous job pinching Charlotte's mania to force a fulfilling ending, undoubtedly satisfying thriller purists, but the real might of "Fissures" emerges from the hushed areas of reflection and regret, where a murder is a horrible act, perhaps only topped by the impossibility of reconciliation.