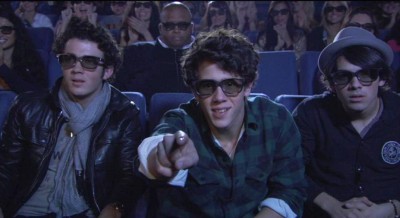 Sometimes being a film critic is being at constant war with your instincts. Around this time last year, the "Hannah Montana/Miley Cyrus: Best of Both Worlds Concert Tour" film was hitting DVD shelves across the country. I popped in the disc cautious and came out smiling, finding a bouncy performance film that utilized cutting-edge 3-D technology and bubblegum pop theatrics superbly, bestowing the devoted the party atmosphere and you-are-there point of view that formed one heck of a show. Now it's time for the Jonas Brothers to play the 3-D concert film lottery, and, once again, I have fear.

Team Jonas, made up of brothers Kevin (the elder statesman), Joe (the heartthrob), and Nick (the runt), has spent the last two years ruling the Disney Channel generation with their gummy bear rock skills and boy-next-door, pants-stay-buttoned magnetism. With top-selling albums and a nation of screaming girls supporting their every last professional step, the jump to the big screen is not hard move to appreciate in a financial sense, and thankfully this "3D Concert Experience" is every bit as lively, strikingly colored, and playfully insightful to the Jonas world as "Best of Both Worlds" was to the Miley Cyrus kingdom.

Granted, it helps to be a fan of the Jonas Brothers. Unlike Cyrus and her agreeable catalog of simplistic, catchy pop tunes, the Jonas musical world view strains a little harder to grasp a rootsy feeling, mixing the beats and tweaks of a typical castrato Disney artist with the flannelled acoustical defiance of true basement musical soldiers. It's difficult to ascertain if the Jonas Brothers are skilled musicians from the film, but the boys certainly play with sideburned gusto, working the stage with Freddie Mercuryesque fervor and flexibility as they roll out their hits in front of a deafening stadium of screaming pre-menstrual devotees and their dutiful parents. Sitting down with this Blu-ray, I couldn't name a single Jonas Brothers song. Pressing eject, I still couldn't name a single Jonas Brothers song, but at least I know now Joe's the guy on all the erasers and backpacks at Target.

Because the Jonas boys made a cameo appearance in "Best of Both Worlds," the band has extended the invitation (or cross-promotional opportunity) to country ingénue/Gelfling Taylor Swift and fellow Disney employee Demi Lovato. Swift manages to stop the show with her unconvincing attitude and rickety vocals on the glittery hoedown "Should've Said No," while Lovato takes a more pleasing stance of pop-tart rock confidence, joining the guys for a spirited take on the "Camp Rock" hit, "This Is Me."

Returning from his "Best of Both Worlds" duty is director Bruce Hendricks, who once again endeavors to break up the performance sequences with little peeks into the staged Jonas world that lurks backstage, through interviews and Beatles-lite fantasy sequences. The quiet moments are disposable and perhaps a bit smug, but they do offer a cherished oasis of calm before the screaming returns, while developing the boys as distinct personalities the rest of the post-puberty world might not be all that familiar with.

The 1.85:1 AVC encoded image presentation on the Blu-ray is a mixed blessing. This being primarily a concert film, the arena sequences pop with colors emerging from the complex lighting schemes of the stage atmosphere and the crowd, who flash their own strobing trinkets and cell phone screens. While light grain makes an appearance (to give the HD cinematography some life), the image recreates the live event with superb crispness. BTS footage has some severe troubles with contrast levels, which routinely destroys the integrity of the black levels. One fantasy sequence in Central Park is nearly ruined by the muddy effect.

Also, the film is available in two forms: 2-D or 3-D (the package comes with four pairs of anaglyph glasses). The 3-D presentation actually works wonderfully in a home theater environment, though colors are lost to the crude technology.

With a concert environment to work with, the DTS-HD audio experience is top notch, with fantastic stage fidelity, giving the music a superb depth and accuracy. Deep bass and warm guitars fill the mix, and if you can stomach the pinched vocals, lyrics are cleanly presented. BTS sequences reveal more of a chaotic punch, but crowd atmospherics (the film's unofficial co-star), and the eventual onslaught of teen girl screams, sound delightful throughout the BD experience. A Spanish 5.1 Dolby Digital mix is also available.

"Up Close & Personal" (15:05) is a BTS featurette on the creation of the "Burnin' Up Tour." Observing the boys as they rehearse, goof around, and rehearse some more is entertaining, if only to watch adults pretend the Jonas boys are hilarious and important. Some of the footage here is used in the final film.

Disc Two is the 2-D presentation of the film on DVD, with a 5.1 Dolby Digital sound mix.

Disc Three is a Digital Copy of the film.

"Jonas Brothers: The 3D Concert Experience" delivers the goods in a big way, showing off the band at the apex of their popularity with the assistance of fun three-dimensional effects and enormous visual depth (often filled with glow sticks and digital cameras). While it helps to be versed in all matters Nick, Joe, and Kevin, idolatry isn't a requirement. A bright, brash display of unsophisticated pop music reaching out to the viewer's nose is easily appreciated no matter where it originates from.