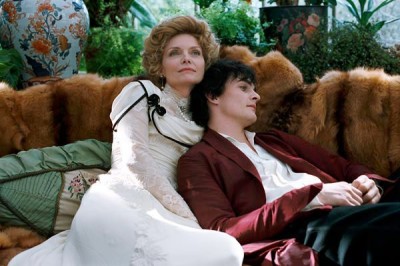 In 1988, director Stephen Frears, writer Christopher Hampton, and actress Michelle Pfeiffer teamed up to run through a myriad of period games of deception and lust in the classic picture, "Dangerous Liaisons." Two decades later, the trio has reformed to plunge further into the bleak heart of obsession in the acidic dramedy "Cheri," adapted from the novel (and its sequel) by celebrated French author Colette. It's sexy, pithy, and enchantingly cutting, making the best use of Pfeiffer in a long time.

During the La Belle Epoque era in Paris, courtesans Europe-wide found themselves elevated to near-royalty status, flush with cash from various affairs, living lives of extreme comfort. For middle-aged Lea de Lonval (Michelle Pfeiffer), time is catching up to her legacy as a hotly desired escort. When close friend Madame Peloux (Kathy Bates) requests Lea to help open up her son Cheri (Rupert Friend) to worldly desires, the aging predator takes to the 19-year-old prey, commencing a sexual relationship that lasts for six years, creating an unexpected bond. Forced into an arranged marriage, Cheri leaves Lea for a younger wife and new life, abandoning the lady of the evening, left to reflect on her loneliness. As the year passes, Cheri finds wedlock excruciating, with his every thought consumed by his former lover. Lea is equally as bothered, hopeful that Cheri will come to his senses and return to her arms, looking to trips abroad to clear her mind of such forbidden desires.

Out of all the tea-n-scandal motion pictures to shoot down the pipe in recent memory, "Cheri" holds the distinction of being the bitterest entry, undercut with a generous sway of sexuality to keep the proceedings electric with lurid consequence. Hampton tarts up the source material to match a more modern crime of passion that sweeps away our main characters, deliciously delving into the debauchery and passivity of the era and locale. Frears takes Hampton's wet-lipped hint and bathes the film in a booze-soaked haze of opulence and intolerance, employing masterful cinematographer Darius Khondji to deliver bold images that both recreate the painterly perfection of the time, and also gently develop Lea's battle with age and how we perceive her reality. "Cheri" is a gorgeous picture to watch as the events spill all over Europe and into the luxurious domiciles of the courtesans. 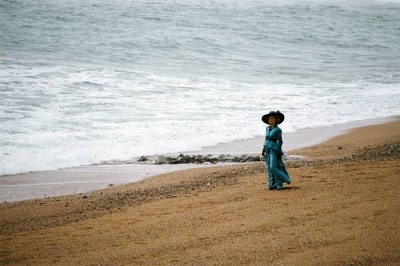 Also in Frears's tight control is the psychological whiplash between Cheri and Lea, as they struggle internally to overcome jealousies and regret in their new lives. Frears stages the conflicts as little pockmarks of soured response within greater displays of nimble, acerbic dialogue. Pfeiffer is a marvel with these subtle expressions of horror, achieving wonderful voluptuary vanity and self-destruction as Lea, who embraces her monetary liberation through sexual deeds, but can't seem to flush Cheri, the forbidden fruit, out of her system. It's a majestic performance from the actress, eager to confront whatever Hampton and Frears give her.

There's some disappointment in the casting of Friend as Cheri. Perhaps more effeminate than any of his female co-stars, Friend is overwhelmed with the workload, especially with Frears picking at a thread of homosexuality for the character to shade the role further. It's a thankless role as the shattered manchild, especially standing next the radiant Pfeiffer. Surely a different actor with an alternate projection of malformed maturity would've made for a grander statement of destructive indecision. Friend just doesn't carry the mournful weight or tight-pantsed drive to create a memorable, spiteful Cheri.

As the seesaw moves from the foamy, snappy comedy of Lea and Cheri's courtship to the cruel darkness of their separation, Frears adjusts the tone superbly. He's also preserved a corker of a conclusion as well, leaving the opulent world of "Cheri" to implode right before our eyes, but it's a terrific ride to the bottom.