Billie Holiday: The Life and Artistry of Lady Day 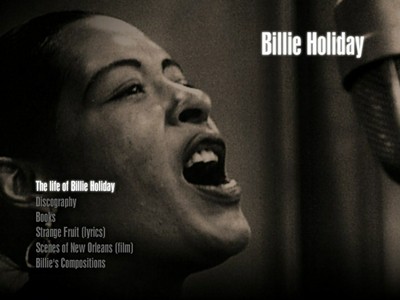 I suppose some might call it a good start, but it's hard to tell who Billie Holiday: The Life and Artistry of Lady Day is intended to please. At a brief 27 minutes, it barely gets underway before it's over, and unless you're looking for a shotgun introduction to the incomparable jazz legend, I don't see much purpose in it. For anyone attracted to the singer's gorgeous and plaintive tones, this all-too-brief disc is only going to leave you wanting more.

Billie Holiday: The Life and Artistry of Lady Day is a short biography of the singer, covering birth to death and the bullet points that pepper the outline in between. The story is told through photos and clips of the performer, information given in voiceover, there are no onscreen commentators. It would seem the big draw here is the handful of performances of some of her most famous songs ("Strange Fruit," "God Bless the Child," etc.), selected from different sources and different points in her career, including a comparison of versions of "What a Little Moonlight Can Do" recorded twenty years apart and her final television appearance in the 1950s, singing "Fine and Mellow." One rare find includes clips of her acting and singing in the Duke Ellington-headlining short "Symphony in Black: A Rhapsody of Negro Life," her first appearance on film, ca. 1935.

What's here is good, but given the tragedy of her life, and the highs and lows that made her so story (and songs) so special, it's just not enough to do Lady Day justice.

Cinephiles may be impressed, however, to see the second program, a collection of her clips from the film New Orleans, directed by Arthur Lubin in 1947. It's just four snippets, about 11 minutes total, and...wait, that movie is on DVD in its entirety from Kino for $10 more than this disc, so why not just buy it and get the whole production? It even contains...oh, dear, the entirety of "Symphony in Black." Makes me wonder where else I might be able to get the rest of the performances used here....

Still, the separate availability of other products not withstanding, Billie Holiday: The Life and Artistry of Lady Day is a fine little disc for what it is. It might be better as a bonus to a really good CD set, but for those looking for a starter point to explore Billie Holiday further, this DVD would do well to send you on your way.

Video/Sound:
The full frame image is of an average quality, and though the clips shown vary based on their source, the program itself is at least consistent. Likewise, the mono mix is smoothed out so that there is a maintained standard from start to finish.

Extras:
In addition to the pieces from New Orleans, we get several text-based bonus features: a selected discography of Holiday recordings, a selected bibliography of her bios, the lyrics to "Strange Fruit," and a list of songs she either wrote or co-wrote.

FINAL THOUGHTS:
Rent It. Billie Holiday: The Life and Artistry of Lady Day is frustratingly short, but what is there is good. The shortcut bio of the remarkable singer comes with plenty of vintage performances to round out the info, but with the main program clocking in at under half an hour, it's not a satisfying disc unto itself. 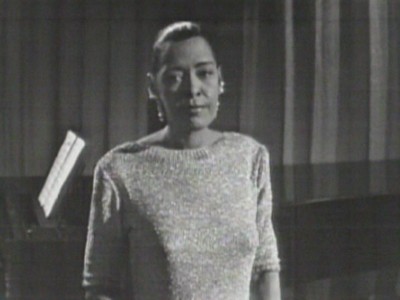