Second Run // Unrated // June 1, 2009 // Region 0 // PAL
List Price: £12.99 [Buy now and save at Co]
Review by Chris Neilson | posted July 6, 2009 | E-mail the Author
Dada-inspired surrealism generally leaves me cold, but I have nothing but admiration for Věra Chytilová's 1966 Czech New Wave classic Daisies (Sedmikrásky). The film, which lacks a traditional narrative structure, revolves around two young women who've decided that the world has been spoiled so they will be spoiled too. The self-described dolls are beautiful but empty ciphers without personal histories, motivated only by a nihilistic desire to spoil themselves and ruin everyone and everything around them. Older libidinous men are the principal target of the girls' machinations, but a nightclub, banquet, and other proxies for bourgeois consumption are also targeted. 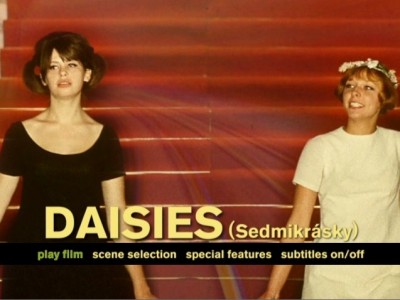 Věra Chytilová and co-writer Ester Krumbachová purportedly originally intended for the film to be critical of the girls, but this intention largely gave way in the shooting and editing which clearly tilts audience sympathies towards the girls. Bright colors, playful visual effects, spirited music, and the joyfully-energetic antics of the girls outweigh the instinct for reprobation making the viewer a willing co-conspirator to the mayhem.

Daisies' structure is circular with scenes of war and destruction opening and closing the film, separated by the girls' small-scale acts of mayhem. Intermixed are less frantic scenes of the girls exchanging ethically and ontologically reductionist (and arguably absurdist) dialogue.

Though some critics interpret Daisies as being ultimately ambiguous in its philosophy, I find the critique of the girls' antisocial behavior to be mostly eclipsed by the larger critique of a bourgeois "law and order" mindset that myopically focuses on petty social and moral misdeeds while turning a blind eye to the atrocities of governments and social orders writ large. I draw support for this interpretation from the film's on-screen epitaph:

"This film is dedicated to all those whose sole source of indignation is a trampled-on triffle."

Presentation
Daisies has been released from the UK-based boutique DVD label Second Run on a single dual-layered DVD which is PAL-encoded but not region restricted.

Video:
Daisies was previously released in Region 1 by Facets, but that release pales in comparison to this one. Colors, texture and grain are now much improved.

The original 1.33:1 aspect ratio is retained, and optional English subtitles are provided.

Audio:
The 2.0 monaural Czech audio sounds fine with no noticeable dropouts or distortion.

Final Thoughts:
A narratively-unconventional, satirically-nihilistic critique of materialism and patriarchy may sound like a bore or at least a chore to watch, but that couldn't be further from the truth here. Daisies delivers an exhilarating romp for an open-minded audience and a proverbial poke in the eye for the law-and-order bourgeois of that time or this.