Network Distributing Ltd // Unrated // Region 2 // PAL
List Price: £9.99 [Buy now and save at Co]
Review by Stuart Galbraith IV | posted July 11, 2009 | E-mail the Author
Though set in the present-day Canadian Rockies and made by British filmmakers, Campbell's Kingdom (1957) is almost classically a Western, with a story and genre iconography instantly recognizable. The British weren't known for their Westerns, but this is a big, colorful, and pretty exciting effort, a film that deserves to be better known in America, and to Western genre fans.

We weren't sent final product, but the Region 2/PAL check disc DVD we received offers a handsome 16:9 widescreen presentation of the Eastman Color production, along with a few extras. 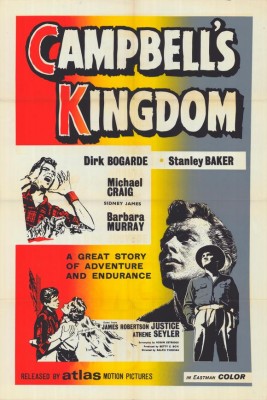 The story pits ruthless damn builder Owen Morgan (Stanley Baker), under contract to a mining company anxious to generate electricity for its operations, against terminally ill Bruce Campbell (Dirk Bogarde), heir to "Campbell's Kingdom," undeveloped acreage possibly rich with oil, but which Morgan plans to flood regardless once his dam is completed. Legally Campbell can't stop Morgan unless he strikes oil.

Bruce befriends and falls in love with fellow Brit Jean (Barbara Murray), while enlisting the aide of surveyor Boy Bladen (Michael Craig), whose promising geological report was switched with a false one by Morgan's men. When it begins to look like there may be oil beneath Campbell's Kingdom after all, speculative driller James MacDonald (James Robertson Justice) joins the trio, but their efforts are under constant threat of sabotage from Morgan and his partner, Ben Creasy (Robert Brown), both of whom will stop at nothing.

A colorful, visually spectacular variation of the rail barons vs. settlers, cattlemen vs. farmers plotlines of innumerable Westerns, Campbell's Kingdom is elaborate and exciting. A large portion of the film was shot on location; the film is set in Alberta, and the gorgeous mountain scenery looks just like that Canadian province, but apparently all the location work was actually lensed in the Italian Alps near Cortina d'Ampezzo. The film pits two of Britain's biggest film stars of the decade, Dirk Bogarde and Stanley Baker, who make intriguingly contrasting rivals, with sickly Bogarde sensitive and delicate, swooning in some scenes, fatalistic given his condition, against "Manly" Stanley (as his female fans like to call him), an imposing, uncompromising brute.

Also in the cast are many familiar faces like Sid James, in a comic relief part, George Murcell as a Lennie-like simpleton, and Finlay Currie in a curiously minuscule part in one scene. Amusingly, there's a lot of crossover casting with several actors from Bogarde's Doctor films and Baker's recent Hell Drivers.

Where the film really pays off is in the action-suspense footage, scenes of Campbell trying to get a convoy of trucks loaded with drilling equipment past Morgan's (illegal) road blocks, and to keep him at bay once they start drilling. There's a terrifically suspenseful scene worthy of Hitchcock when Morgan threatens to withdraw a hoist used to carry the trucks up the last stretch of mountainside. A kind of tug-of-war ensues with Sid James and his truck teetering on the edge of disaster.

Although Morgan's dam is first glimpsed via a singularly poor matte shot, the rest of the special effects are spectacular if not always convincing, with numerous large-scale miniature sets. (Spoilers) In an early scene Blaydon blasts Morgan for using cut-rate cement in the building of the dam, so you know that dam's going to be history before the fade-out. (The spoiler-filled trailer also gives this away.) The burst is epic, better than a similar sequence in 1978's Superman; I'm sure I've seen stock shots of the sequence turn up in other films including, I think, The Castle of Fu Manchu.

Adapted from Hammon Innes's (The Wreck of the Mary Deare) novel and directed by Ralph Thomas, Campbell's Kingdom is story-driven but also intelligent with interesting central characters. An epilogue I won't give away is a real cheat, but no doubt a crowd-pleaser.

Filmed in Eastman Color for 1.66:1 exhibition, the 16:9 transfer here is very good. When the film began I wondered if this was shot in VistaVision, as it has that VistaVision-like clarity and is photographed by Ernest Steward in a style comparable to the handful of other British VistaVision titles, including Doctor at Sea, which Steward also shot. The monophonic audio is okay but unspectacular. There are no subtitle options.

Supplements are limited, but interesting. Included is a 16:9 enhanced trailer playing up the film's big scale and two stars; a textless, mute trailer is also included, along with an extensive photo gallery which includes numerous behind-the-scenes photographs.