Kino // Unrated // September 1, 2009
List Price: $29.95 [Buy now and save at Amazon]
Review by Chris Neilson | posted August 4, 2009 | E-mail the Author
Made for $3000 with first-time actors recruited on Craigslist, Take Out is a day-in-the-life, social-realist drama about an undocumented Chinese immigrant in New York City. Though most of the film is scripted as a detailed cinema vérité study of the interactions between the staff and customers of a small Chinese take-out restaurant, filmmakers Sean Baker and Shih-Ching Tsou attempt to heighten the drama by requiring delivery-person Ming Ding (Charles Jang) to raise $800 by the end of the shift to cover arrears on a debt owed to a loan shark. 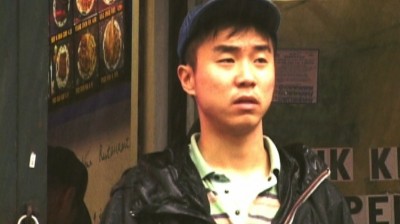 Take Out has a documentary-like authenticity reminiscent of the dramas of the Dardenne Brothers (Rossetta). It was filmed hand-held with a DV camera at a working restaurant during business hours and on the streets and doorsteps of Manhattan, using a mix of actors and non-actors.

Through a dozen orders at the counter and 15-20 deliveries in just 87 minutes of screen time, the filmmakers establish the ugly monotony of the business - the customers who come in to order typically are harassing, while those who phone in their orders are at best indifferent. However, the personal interactions among the restaurant staff provide the most entertaining and seemingly authentic elements of the film, especially those involving delivery-person Young (Jeng-Hau Yu) and register worker Big Sister (real restaurant employee Wang-Thye Lee).

After raising $650 from friends, the goal of earning the last $150 in tips keeps Ming working at a furious pace throughout the day, and it also sets up the darkest most clichéd encounter of the film late in the third act. Though most viewers will expect it long before it materializes, this scene still renders Take Out so bleak that the filmmakers felt compelled to hastily add a final heartening scene which pulls the film back from the darkness.

Presentation
Video and Audio:
Presented in anamorphic widescreen (1.78:1), Take Out has the naturalistic look of a cinema vérité documentary: outdoor scenes are often overblown, while interior scenes are typically dark. Filmed on DV, the image is frequently soft, but not unacceptably so.

The 2.0 DD audio mix is acceptable with no notable dropouts or distortions. Optional English or Chinese subtitles are available for the mixed English and Mandarin audio track.

Final Thoughts:
Though flawed by a plot that feels both slight and manipulated, Take Out mostly succeeds thanks to believable performances from its core actors and an unvarnished cinema vérité style, collectively offering viewers a fresh opportunity to consider the hardships of those who do the most menial jobs in our economy.