James Castle: Portrait of an Artist

First Run Features // Unrated // June 23, 2009
List Price: $24.95 [Buy now and save at Amazon]
Review by J. Doyle Wallis | posted August 14, 2009 | E-mail the Author
In the history of art, "Outsider Art," is a newer category. The term basically applies to people who were never formally trained, often were unrecognized or barely recognized during their lifetimes, and additionally consist of types who live on the fringes of society, people who are largely isolated/outside the norm due to affliction, disorders, choice, or some amalgam of all of the above. 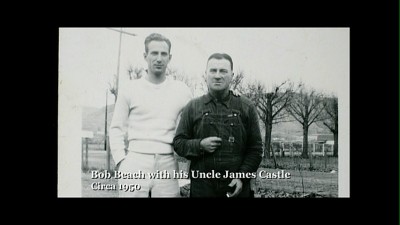 James Castle (1899-1977) was a deaf Idaho based artist. While Castle could make rudimentary noises, he could not speak. Attending a school for the deaf through the fifth grade, Castle's skills of communication remained limited to a few very basic signs and some comprehension of written language but nothing that would be considered literate. This adds an unanswerable wrinkle to Castle regarding his intelligence. There is the possibility he was autistic or retarded and deaf or maybe he was mentally sound but unbending and never properly pushed and guided.

Castle basically lived to create. His family ran a postmasters office and general store and a protective mother afforded Castle with zero responsibilities and the freedom to do nothing but work on his art. So, he had two insular worlds, that of his inherent deafness and of the family that cared for his needs and formed his sustainable circle. Not much beyond that. No education, outside friends, relationships, etc. 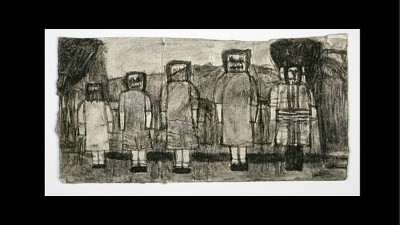 Castle was a scrounger. He used parcel paper, boxes, matchbooks, cigarette packs, basically any thrown away whole or scraps that you could draw on. And, he would draw anywhere, not only material with blank/open areas but the spaces between words and letters. His recycling in media extended to his tools, using twigs and sticks and soot and saliva to make his drawings. Even when turning to color, he drew the ink from discarded wads of paper. While his family was of limited means, he seemed to insist on this, never regularly using even basic artist sketch materials. Aside from landscapes and figure drawing, he also made paper figures and objects, books, and habitually bundled his artwork, perhaps influenced by the family post office, into tight, layered packages.

Filmmaker Jeffery Wolf gathers a cast of family (grandnephews and nieces, cousins), artists, and curators to discuss Castle. The family does their best to discuss what he was like as a person. Showing how insular Castle was, there is a contrast in anecdotes, some saying how he would gladly come to greet visitors and show off his latest art, others that he would make brief appearances at gatherings, then return to his workroom or outside chair to immerse himself in drawing. The art world speakers, of course, do their best to put his work into context, some doing the usual rounds of gushing and injecting grand humane subtext within his work. Bio facts and dissection of his personality are scant and only come into play when discussing how they extend to his art. 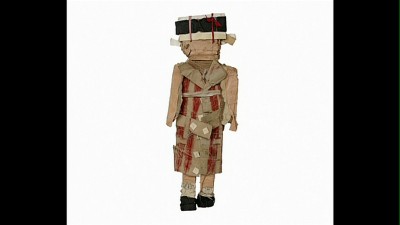 Though his work was crude, or maybe a better description is fundamental and unfettered, by the end of the documentary, there is no denying the sheer mass of what Castle created, the lifelong dedication, and the signs of evolution and obsession define Castle as a singular true creator like any other artist, be they gallery strung or homespun.

The documentary is presented in a Anamorphic Widescreen and the image is quite pleasing. Documentaries can veer one way or the other, sometimes with the time, money, and commitment to a robust image, other times just the basics, letting the info speak for itself. This is an archival footage and talking head doc, but they went the extra mile in post production to give the basic DV photography adequate robustness as well as the usual technical ticks and tremors that come with DV. General details have okay depth, good contrast levels, and warm well-rounded fleshtones and overall color.

A basic 2.0 Stereo track is complimented by English Close-Captioning for the hearing impaired. The audio mix is, again, very nice and clean with good response. Compare the film audio to some of the extra interview footage where the audio wasn't cleaned up and one can hear the distinction and nice mastering process.

Conclusion: Reflecting that it was made for schools, the documentary is a brief 53 minutes and is a good asset to any teacher or art fans in general. This isn't a full scale, to the depths, portrait, more a skilled sketch that gives a introductory glimpse of an artist that, even though he existed and was discovered in the modern age, we will never really know in any way other than his art. The DVD presentation is solid making this well worth a purchase or rental.