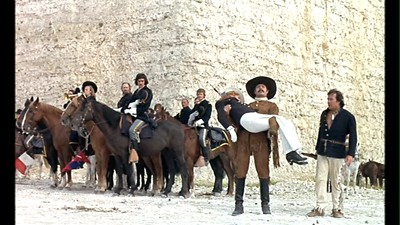 I think the next time Marco Ferreri and I pass in the DVD aisles, the best thing for us to do is give each other a civil nod and keep walking. It's becoming pretty clear that his movies are not for me. I was pretty dismissive of his "savage masterpiece" La Grande Bouffe when I reviewed it earlier this year, but I thought I'd give the Italian director another shot with his 1974 absurdist satire Don't Touch the White Woman. Though, if I'm being honest, I mainly wanted to watch it for Catherine Deneuve. I like Catherine Deneuve. I also like Marcello Mastroianni. Neither of them are enough to save this movie.

Don't Touch the White Woman is Ferreri and co-writer Rafael Azcona's surreal take on the legends of the American West. Mastroianni plays Colonel George Armstrong Custer, and rather than send him to Little Big Horn in the 1800s, the filmmakers have set him down in an anachronistic landscape, a town that is crumbling under its own progress in a 19th-century America where Richard Nixon is President and the Pinkertons are CIA agents who don college sweatshirts in order to pass as anthropologists. Custer is brought in by a business conglomerate backing the railroads to clean out the influx of Native Americans that has been lead into their slums by Sitting Bull (Alain Cuny, Camille Claudel) and his advisor and court jester, a naked, bald madman (Serge Reggiani, Army of Shadows). Joining the venerated American icon as the public face for this campaign is Buffalo Bill (Michel Piccoli, Mastroianni's La Grande Bouffe co-star), a comedian who dislikes Custer nearly as much as Custer dislikes him. Just seeing Bill's gray moustache is enough to make the soldier bark like a dog. 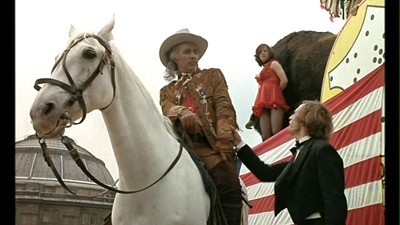 Calming Custer down is the presence of Marie-Hélène de Boismonfrais (Deneuve), a volunteer nurse. With her long red hair and immaculate white dresses, Marie-Hélène is definitely a sight to behold. Hers is also a pretty thankless role. All Deneuve really gets to do is stand around and be pious and then say something racist in order to puncture her pristine image. Outside of one actually pretty amusing scene where her sexual desires for Custer are unleashed--Deneuve is a little too good at parodying seduction; that bottom lip has been chewed on before!--her only other purpose is to be the occasional fetish object for Custer's Indian scout Mitch (Ugo Tognazzi, Satyricon). He's the one who keeps getting told to stop touching white women. He also gets a lot of tomatoes thrown in his face by his fellow Native Americans. Later, Buffalo Bill puts a pie in another man's face. Apparently Ferreri has never met a stick he wouldn't slap.

With social commentary as broad as all that, Don't Touch the White Woman is, unsurprisingly, an absolute mess. Ferreri adopts a smug political standpoint that, yes, America's Manifest Destiny was nothing to be proud of, and many a Hollywood cowboy myth likely oversold the heroics of the frontier. And yes, I get it, we haven't necessarily learned our lesson. Nixon was as big of a killer as any of the old guys, just as George W. Bush could easily be slotted in the same role were Don't Touch the White Woman to be remade today. That's really about as heavy as the commentary gets, though, there is no larger insight. Big business paid for the slaughter, clowns and vainglorious buffoons carried it out. Guilty as charged! Of course, for as politically progressive as Ferreri likely imagines himself, he apparently never blinked at the idea of having Italian men with tans play the Native Americans. Et tu, Marco?

It's not that the Old West isn't ripe for send-up, but Mel Brooks said more about race and America's will to power in Blazing Saddles than Ferreri could ever hope to. Maybe it's because Mel lived in the country, grew up amongst its stories and its hypocrisies, he understood it more, whereas from his European vantage point, Ferreri wouldn't need a step ladder to get up and down from his perceived high ground. He really lets his cast down, too, by not delivering better material for them. Marcello Mastroianni and Michel Piccoli in particular go for broke, but their sweat and bluster evaporates in the empty air of this script.

The one nice thing I can say about Don't Touch the White Woman is that Ferreri does get it right by having Custer's Last Stand turn into a gory horror show. When it counts, the director doesn't flinch, and it's hard not to think the glory hound got what was coming to him. It's also shooting fish in a barrel, so it doesn't require any of the delicacy or wit Ferreri otherwise lacks. I guess even the worst dart player has a bull's eye in him occasionally. 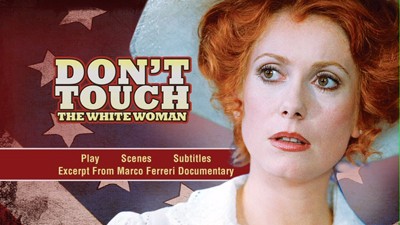 Video:
Don't Touch the White Woman has been brought to DVD as a 1.66:1 anamorphic transfer. The image quality is slightly below average, with decent colors and fair resolution. There is some grain that appears in a lot of the film that looks like a compression problem, and the persistent interlacing grows more noticeable the more frenzied the film gets. In other words, expect a lot of jagged lines in the climax, the one part of the movie I actually praised.

Sound:
The soundtrack for Don't Touch the White Woman has been mixed in mono, preserving the original French. It sounds okay, a bit tinny at times, but serviceable. The optional English subtitles are displayed in yellow and move at a readable speed.

Extras:
Nearly three minutes of the documentary Marco Ferreri: The Director Who Came From the Future is excerpted here, as it is on some of Koch Lorber's other Ferreri discs. This snippet, naturally, deals with Don't Touch the White Woman.

FINAL THOUGHTS:
Don't Touch the White Woman is likely the kind of movie that is going to get me angry mail, as I have no doubt that there are people out there who will hail its jumbled sloppiness as some kind of mad genius. Well, I suggest you save your letters for someone else, because I get it, I understand, I don't need to hear it. You aren't going to change my mind. Marco Ferreri's 1974 send-up of Hollywood westerns and American mythologizing is a shallow, hammy bore. This is shabby satire masquerading as progressive lunacy. As movies about Custer go, this is the most Custer-like: so full of itself, it doesn't see how bad it's failing. Skip It. 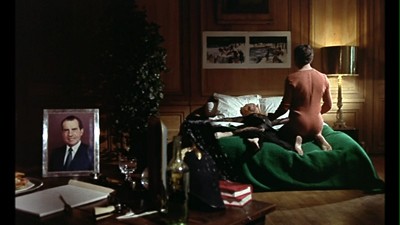