Other // Unrated // August 11, 2009 // Region 0
List Price: $44.50 [Buy now and save at Kuklafranandollie]
Review by Stuart Galbraith IV | posted August 22, 2009 | E-mail the Author
One of the most beloved, enduring, and influential children's shows of all-time, Kukla, Fran and Ollie was around in some form or another from the earliest days of television - Burr Tillstrom's wonderful puppets debuted on a program called Junior Jamboree in 1947 - and continued off-and-on until his death in 1985. EML Library's Kukla, Fran and Ollie - 60th Anniversary Premiere Collector's Edition, currently available only through direct order via their website, seems to have been produced by hands who'd only vaguely heard of something called dee-vee-dee technology but wanted to make their holdings available.

The result is a clumsy, in some ways inept and overpriced product, though its limited contents will appeal to die-hard fans. A few examples of the self-defeating shoddiness: Though it contains five discs, the box holding everything together lists a total running time of 30 minutes. In fact, what's included are five 25-minute shows, so the actual running time is a little over two hours, about 125 minutes. Further, the badly written press release confusingly notes, "Each of the five DVD's [sic] run 30 minutes and can be purchased for $44.50." However, the cost of the entire five-disc set is $44.50; that's not the price of each individual DVD.

But even at that amount Kukla, Fran and Ollie - 60th Anniversary Premiere Collector's Edition is outrageously overpriced. As I write this a major online retailer is selling season-long sets of popular shows like ER and Dallas, each with up to 23 hours of material and frequently crammed with extra features, for less than $15. This set includes just five episodes with no extra features, no booklet - not even basic menu screens or closed-captioning (where's the "Premiere Collector's Edition" part?) at what comes out to $8.90 per show. Times are tough for indie labels with worthy product vying for dwindling shelf space, and a title like this deserves to reach parents with small children wanting a break from Disney and Sesame Street - but at these rates only hardcore fans with a lot of disposable income are going to pony up the dough for something like this. 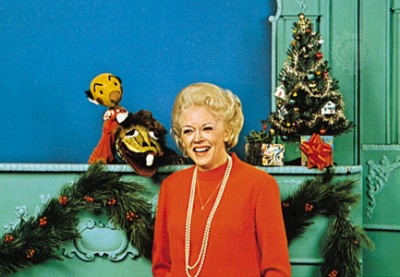 The packaging doesn't even identify clearly what the set encompasses. It's not the 1948-57 original series, which aired on NBC for most of its run, but rather five of a season's worth of color episodes from the late-1960s or early-'70s, videotaped in Chicago, apparently for syndication by PBS affiliates.

The show itself is a marvel of simplicity and boundless charm. Burr Tillstrom was the sole puppeteer, with clown-like leader Kukla, Oliver J. "Ollie" Dragon," retired opera diva Madame Ooglepuss, benign Beulah Witch, and Fletcher Rabbit being the most prominent characters. Radio actress-singer Fran Allison, the only human presence, stands around the outer rim of the show's proscenium arch, joining in for songs and occasionally playing characters. The show is, to say the least, uncluttered with razzle-dazzle and technology. Each 25-minute show typically consists of three medium shots, and Tillstrom's style was much closer to the Neapolitan/Punch and Judy style of puppetry than Jim Henson's more famous, later Muppets, though Henson regarded Tillstrom as a monumental influence.

Perhaps the key to the show's success was that it was largely ad-libbed. Apparently Tillstrom would build an episode around a basic idea that he and Allison would discuss before taping (and presumably deciding upon songs to sing beforehand), but once in character(s), Tillstrom and Allison would do an entire 25 minutes extemporaneously. That it succeeds as well as it does is a tribute to Tillstrom's wonderful, sly characterizations, more intelligent and less slapsticky than Punch and Judy shows, and Allison's ability to ad-lib so flawlessly.

Over time, the show began to appeal to adults as much as children, in much the same way Rocky & Bullwinkle would a bit later on. I wasn't sure whether my Elmo-loving two-year-old would go for the more leisurely-paced Kukla, Fran and Ollie but, surprisingly, she was so entranced I had to stop the show a few times and force her to blink her unblinking, watery eyes. No kidding.

The five shows are titled "Be a Clown, Be a Clown," "Get on the Dragon Wagon," "Kukla Discovers America," "'Tis the Season to Be Ollie," and "Madame O's Merry Musicale."

The no-frills DVDs are without menu screens. Load them into the player and nothing happens until you hit play. When the show's over, everything stops. And that's pretty much it. The shows included here were all shot in color on late-'60s era videotape. They seem well preserved but show their age. There are no alternate audio or subtitle options, and no Extra Features.*

Kukla, Fran and Ollie - 60th Anniversary Premiere Collector's Edition offers five good shows but the lack of extras (among other things) and limited number of episodes don't really justify the high price, not in today's market. Nostalgic fans aching to see these beloved characters again won't object too strongly, but parents looking for something worthwhile to show their children may want to Rent It.

* According to a reader, a laugh track and synth music were added to these shows in the late '90s, when they were first released on VHS, and that this set presents those same shows transferred to DVD.