ADV Films // Unrated // June 16, 2009
List Price: $39.98 [Buy now and save at Amazon]
Review by Chris Neilson | posted August 24, 2009 | E-mail the Author
Dozens of Japanese women have given birth to mutated baby girls over the past eighteen years. Marked by nubby horns and red or pink hair, these mutants, labeled Diclonius, develop "vectors", extraordinarily-focused telekinetic power allowing them to defensively deflect objects such as bullets and to offensively affect objects at a distance as though by an invisible hand or sword. With some variation, most of the Diclonius are able to project two vectors up to a range of three meters that are powerful enough to instantly decapitate an opponent or burst a chest cavity. After a couple of instances of Diclonius slaughtering their parents or others they have perceived as threatening, a secret military-industrial research facility was established to confine and study the Diclonius. 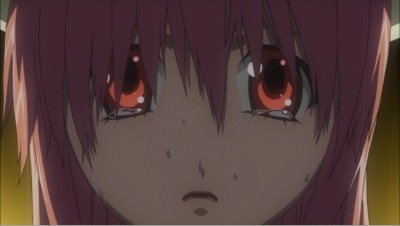 The events in the thirteen-episode series Elfen Lied all flow from the violent escape of an eighteen-year-old Diclonius called Lucy. After graphically slaughtering a small army of security guards, Lucy is shot in the head just before plunging into the sea. A short time later, Lucy strides nude onto a nearby public beach where she is found by freshman college students Kohta and Yuka. Due to the head wound, Lucy has lost her memory and command of language. All she will say to any prompt is "nyu", and this Kohta and Yuka decide will be her name.

The research facility sends teams of commandos, and later other Diclonious, to locate and kill Lucy. While the commandos mostly provide fodder for more graphic violence, the two Diclonius sent after Lucy become characters of note over the course of the series with one ultimately joining with Kohta and Yuka to protect Nyu.

Over the course of the thirteen episodes back-stories are fleshed out, romance blossoms, new characters are added, memories are regained, secrets are revealed, and lots of people have their arms, legs, and/or heads ripped off. The pacing of Elfen Lied works well enough throughout the first two-thirds of the series, but falls apart at the end leaving many loose ends dangling.

Though animated, the level of graphic violence (including against animals), child abuse (sexual and psychological), nudity and profanity make Elfen Lied inappropriate for children and sensitive viewers.

The quality of the animation can be very good, but there's also plenty of mostly static shots with little or no active animation. The voice acting, on both the original Japanese audio and the English dub, are competent but unremarkable.

Presentation
Elfen Lied: The Complete Collection is a budget release from ADV available in a 3-disc brick in which all the discs are housed on a single hub.

Both the original Japanese and the English language 5.1 DD mixes sound superb. Directionality is dynamic, voices are clear and bright, and there are no noticeable dropouts or distortions.

Extras:
Continuing ADV's standard procedure, the extras available on the individual disc releases of this series have not been carried over to this complete budget-priced release. The only extra to be found are six individually-selectable trailers for other ADV anime series on disc one.

Final Thoughts:
Elfen Lied: The Complete Collection provides a short thirteen-episode anime series that will be especially appealing to viewers who enjoy dark themes and graphic violence, leavened with lighter romantic-comedy touches. Although the series never feels particularly fresh or innovative, the plot is competently developed, producing a whole this is mostly satisfying except for a few too many loose ends.