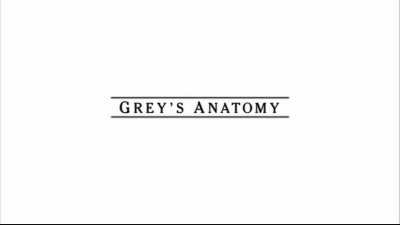 Before we begin, you should know that I am new to Grey's Anatomy. I came into this review with limited exposure to the show (I have only seen the characters in the crossover episodes from Private Practice's second season). While I have missed the first four seasons, I think I developed a pretty good grasp on what was happening in season five and about the characters. Of course, I am probably missing some juicy background details and character developments. In any case, I was impressed with Grey's Anatomy. There has been a lot of hype about it and I now understand it. The show is a fun soapy melodrama that doesn't overexert itself and manages an ensemble cast in a fashion that is easy to follow.

As season five starts, Seattle Grace Hospital is having problems with its quality of service. The most recent ranking drops the hospital down to twelfth place. Grace also recently lost their status as a level one trauma center. The Chief is not too happy about it. Throughout the season, he makes changes to the staff and policy to try to get the hospital back to being the best. Of course, there are many obstacles along the way, which include the hospital flooding and personnel issues.

US Army Major Owen Hunt (Kevin McKidd) is a new character introduced at the beginning of the season. He is a trauma surgeon who has been serving in Iraq. He stumbles into the hospital when he saves a man's life (using a pen) who was in a terrible accident. His unconventional methods catches everyone eye... especially Cristina's. They have an odd meeting with sexual tension. The Chief also takes note of Hunt and offers him position as head of trauma. Hunt declines, but several episodes down the line he returns and takes the job. When he reenters the show as a regular character, the romantic chemistry with Cristina continues to build. At the same time, he struggles with his inner demons from his time in Iraq.

There are several other new developments. Torres experiments with her sexuality and female partners. Mark tastes the forbidden fruit, Lexie Grey, and the relationship becomes more than just a fling. George becomes a full fledged resident after taking the exam for a second time. Meredith and Derek take the next step in their relationship, and move in together. She also finds her mother's journals and learns about her live. Her friend Sadie (Melissa George) becomes an intern, but she is unpredictable and unreliable. Izzie embarks in a new relationship with Alex. At the same time, she has visions of Denny. The young interns decide they aren't learning enough from the residents and practice on each other, which does not end for the best. Arizona Robbins (Jessica Capshaw) becomes the new head of pediatrics. Bailey considers specializing in pediatrics after working with Arizona, which the Chief does not like.

As for medical cases, there are number of exciting episodes with some big, dramatic surgeries. "There's No "I" In Team" is a pretty intense episode. Bailey is in charge of running a big event for the hospital. She has a twelve person kidney transplant. The catch: everyone is donating so that someone else will do the same for their loved one. If one person pulls out, it is over. "Wish You Were Here" has two exciting plotlines, which are connected. Bailey works with Arizona to save a young boy's life. Unfortunately, if he does not get a new kidney in twenty-four hours, he will die. Meanwhile, Derek, Meredith, and Cristina treat a man who is scheduled for execution in a few days. The patient plays a psychological game with them, as he wants to dictate his own death. He is also a donor match to the young boy, which poses various complications. It is an emotional episode.

Overall, Grey's Anatomy's fifth season was strong. For a melodrama with a large cast, the series does well handling them and keeping them interesting as individuals. Their relationships also prove to be another strong selling point. In comparison to my recent review (and subsequent first exposure to the Grey's Anatomy/Private Practice world), I found Grey's Anatomy to be more engaging than Private Practice. Beyond the intricate characters, the medical cases offered bigger and bolder issues that amounted to a lot of entertaining drama. In the end, I am new to Grey's Anatomy, but quickly found a niche with the show. 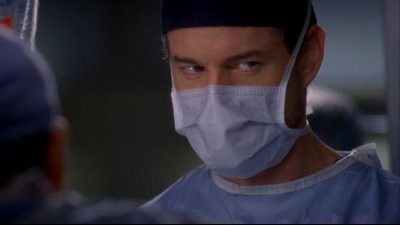 1. Dream a Little Dream of Me Pt. 1: Meredith and Derek learn that "happily ever after" isn't easy, and a military doctor who brings in a trauma patient catches Cristina's eye.
2. Dream a Little Dream of Me Pt. 2: Cristina's treated by Major Hunt after being impaled by an icicle and Meredith and Derek finally reach a conclusion about moving in together.
3. Here Comes the Flood: A plumbing leak becomes a deluge and wreaks havoc at Seattle Grace, as the Chief attempts to implement new teaching policies.
4. Brave New World: Meredith freaks out when Derek discovers her mother's old diary in the house and Cristina stumbles into a part of the hospital that she's never seen before.
5. There's No "I" in Team: Bailey heads up a team of surgeons performing a "domino procedure" in which each surgery hinges on the one preceding it.
6. Life During Wartime: To help Bailey become a better surgeon, the Chief gives her new power, new responsibility, and the challenge of removing a girl's inoperable tumor.
7. Rise Up: The Chief announces to the residents that a solo surgery will be awarded, and the news sends them into a competitive frenzy.
8. These Ties That Bind: One of Meredith's oldest friends, Sadie, becomes an intern at Seattle Grace, but Mer's friends are less-than-welcoming to her.
9. In The Midnight Hour: Meredith, Cristina and Bailey come to Lexie and Sadie's rescue when a surgery goes horribly wrong.
10. All By Myself: Cristina is awarded the first solo surgery among the residents, but must give it up and choose her replacement.
11. Wish You Were Here: Bailey teams with Seattle Grace's new pediatric surgeon, Dr. Arizona Robbins, to save the life of a young patient.
12. Sympathy for the Devil: Derek's mother makes a surprise visit to Seattle and meets Meredith for the first time, as Mark tries to conceal his relationship with Lexie from her.
13. Stairway To Heaven: Bailey grows desperate as a patient's condition becomes more and more dire.
14. Beat Your Heart Out: Now that Derek has the engagement ring, he searches for the perfect way to propose to Meredith, as Lexie demands that she and Mark go public.
15. Before and After: Addison, Naomi and Sam rush the ailing Archer to Seattle Grace and reunite with old friends Derek and Mark to help save his life.
16. An Honest Mistake: Derek's confidence is shaken like never before as he faces off with Addison over what course is best for their dying pregnant patient.
17. I Will Follow You Into the Dark: After learning at a deposition that more of his patients have died than survived, Derek decides to quit, even as Meredith refuses to give up on him.
18. Stand by Me: Derek refuses to return to SGH and it takes a visit from the Chief himself to set him straight; Izzie's cancer secret comes out.
19. Elevator Love Letter: Some of Izzie's friends fail to rally around her as Derek must overcome his fears in time to remove her deadly brain tumor.
20. Sweet Surrender: As she endures aggressive treatment for her cancer, Izzie throws herself into planning Derek and Meredith's wedding.
21. No Good at Saying Sorry: Izzie gets a surprise visit from her mother (Sharon Lawrence); Thatcher tries to make amends with Meredith and Lexie; Meredith and the Chief argue over a controversial case....
22. What a Difference a Day Makes: Derek and Meredith get ready for their wedding; college students injured in a car accident are admitted to the ER; Izzie starts experiencing familiar symptoms.
23. Here's to Future Days: Izzie spends time with a fellow cancer patient and contemplates whether or not to undergo a risky surgery and George makes a big decision of his own.
24. Now or Never: George delivers stunning news to Bailey, sending shockwaves throughout the hospital, and Izzie's friends anxiously await her recovery from surgery. 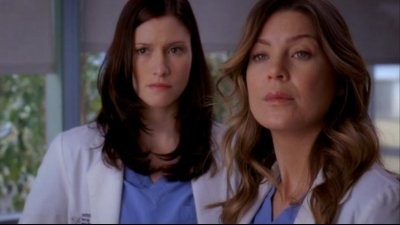 
Video:
The video in this release is given in anamorphic 1.78:1 ratio widescreen color format. The picture quality is quite good. It suffers from a slight grain, but detail remains to be sharp and clear. However, there are some occasional moments when the picture suffers compression artifacts. This is a rare occurrence, but it does happen. Needless to say, the show should look good on bigger television sets.

Audio:
The audio in this release is given in English 5.1 Dolby digital surround sound. Overall, the sound quality is very good, providing an audible and clean audio track. The majority of activity is in the forward channels, but there is decent use of the surround sound capability. Music and sound effects sound very rich and vibrant. There are subtitles in English, French, and Spanish.

Final Thoughts:
I was new to Grey's Anatomy with this review, but I quickly got into it and enjoyed season five more so than Private Practice's second season (which is the only exposure to the show I had in the past). The show has a large ensemble cast and manages to handle their development as individuals and the relationships between them well. The characters come off as interesting and intriguing as they handle personal and professional drama, which typically clash. There are also plenty of exciting medical cases with big, emotional surgeries. In the end, Grey's Anatomy's fifth season is a solid watch for those looking for a rich and well-played out melodrama.