Opening the broadcast card was Yoshihiro Akiyama versus Alan Belcher. Debuting Korean judoka and striker Akiyama is a huge boon to the UFC and its expansion into South Korea, where Akiyama is a star athlete, singer, model, commercial pitchman, and all around sexual powerhouse (that last part is for the die hard fans). Belcher is a good debut test, the kind of fairly well-rounded journeyman whose record goes win-lose-win-lose when facing mid to top tier opposition. This close, back and forth fight that leaves both men busted-up and winded is somewhat marred by commentator Joe Rogan screaming robbery when the decision is handed out.

Dan Henderson versus Micheal Bisping had months of buildup due to the two middleweights involvement as rival coaches on The Ultimate Fighter. A clash of opposite personalities, trash talking cocky Bisping against the humble, no fuss no muss Henderson. From the outset it is clear that Bisping's bluster didn't add up to in ring cool as he clearly looks flustered and continually moves in the wrong direction, to his left, putting him in line with Henderson's favored bricklike right hand. Annoyingly, Henderson's brutal KO of Bisping is somewhat censored on this disc. Hendo nails him with a right, Bispings crumbles to the mat, and Dan leaps in the air landing one more extra shot to Bisping's prone body. This last, final "unnecessary" punch is shown in real time but excised from the replays and post fight interview.

Due to the possibly of going over time, Jon Fitch versus Paulo Thiago was originally shown on the ppv broadcast after the main event. On the DVD it is presented in the middle of the card. Poor Paulo Thiago. His first UFC fight was against regarded welterweight Josh Koscheck and here in his second fight he got tough as nails, always a contender Fitch. A hard introduction indeed, but Thiago at least shows his mettle as Fitch flexes his grappling acumen and grinds away for a controlling win.

The co-main event for the UFC welterweight title pitted champ Georges St.-Pierre versus Thiago Silva. Silva was seen as GSP's stiffest test, a powerful striker with a size advantage that might pose problems for GSP's ground game. But, what a ground game. Despite GSP having zero pedigree in grappling compared to his fighter peers, he has risen to become one of the best grapplers in all of MMA. I swear, the moment he found the mat was probably like when a savant kid springs alive when put in front of that one thing that sparks their genius. But of course, GSP can strike too, and in addition to taking Silva down at will, a savvy use of long jabs and low kicks pretty much shuts down Silva's striking game.

The main event was for the UFC heavyweight title and was the second bout between Brock Lesnar and Frank Mir. Lesnar proves that MMA, for all its leaps and bounds towards legitimacy, still leaves that door open for the freaks. Though his past athletic pedigree as a college wrestler and NFL washout is solid, Lesnar is best known for his stint as a professional wrestler and received his shot at the UFC HW title with a record of a mere 2-1. Why would a man get a shot at a title with that kind of record? Because, they were paying him six-figures, he brought in an audience of crossover wrasslin' fans and, well, people want to see a spectacle and the badly tattooed man-mountain provides that in spades.

Lesnar's personality appears to be one part natural douchebag and one part wrestling heel. He grumbles or acts like a petulant child when doing interviews. Despite his solid rematch win over Mir, where he uses his considerable size and wrestling to smash submission fighter Mir on the mat, TKO'ing him in the second, Lesnar's post-victory antics include screaming in a wobbly Mir's face, flipping off the boo'ing fans, and then- EDITED on this DVD- debasing UFC's sponsor Miller Lite for not paying him enough, this despite the fact that he is one of UFC's highest paid fighters, making nearly half a million for the fight.

Yes, I'd rather be talking about Lesnar's ability to have Mir down, simultaneously headlock and trap one of Mir's hands with one arm while using his other fist to pound Mir's face with short punches. But, no, instead I'm talking of antics because that was the biggest impression left after the fight. It is the sad state of most fight sports. Talent and performance alone should be enough, but these days some fighters feel they aren't doing their job if they aren't endlessly quotable like Ali or crazy controversial like later era Tyson.

Sports fans really seem to salivate over high def and UFC jumped pretty early onto that bandwagon. They also employ pretty expensive camera rigging in order to get every angle and as such the Anamorphic Widescreen image is quite crisp and clear with excellent details. You'll see it all, from the specks of blood peppering the canvas as they come off Mac Danzig's face, to the bronze sheen of Akiyama's tan, to the white flecks of spittle as they fly out of Lesnar's mouth and land right on the camera.

Two audio options cover English or Spanish language commentary in 2.0 stereo. Good robust audio for such a simple track. Naturally the commentators are in the forefront of the mix, but there is a decent bit of atmospherics and fight sounds in the background. Of course, it needs to be noted that for the ringwalks, the fighters original entrance music is gone due to rights issues and more generic tracks play in their place. What drove me up the wall and seemed excessive was is that every curse word is strongly bleeped. I mean, its a violent sport. It's on evening ppv. I'm unsure who exactly they are protecting as their audience has to be a good 98% adults.

A second disc houses all of the extras. The six preliminary fights are on this disc, and, honestly, its strange to call them an "extra" as they are part of the fight card and their omission would have fans up in arms. The prelims are all pretty solid and feature some good UFC prospects and one classic era champion. Two lightweight bouts, Jim Miller versus Mac Danzig and Matt Grice versus Shannon Gugerty. Also middleweights C.B. Dolloway versus Tom Lawler and welterweights Dong-hyun Kim versus T.J. Grant. Finally two lightheavyweight clashes with Jon Jones versus Jake O'Brien and former UFC HW champ Mark Coleman versus Stephan Bonnar.

On the featurette front there is the Spike tv Countdown to UFC 100 special (40:54) and Behind the Scenes (21:20). Both are fine extras, the former a well-packaged promo show covering the main fights, background info, and showing the participants training. I like seeing everything that goes into the production and the fighters backstage pre and post fight, so I could have done with a longer behind the scenes segment.

Well, it is a must have for fans and a solid fight card. I will not go without a grumble. I've got most of the UFC DVD's (my only gap is with the newer, say last ten or so releases) and there has always been damage and pace control editing. However, the censoring on UFC 100 goes above and beyond by editing out casually or emotionally slung curse words and cutting down the KO replays. If I bought the uncensored $50 ppv, I want the relative same when I buy the DVD. Seriously, do we really need to make MMA a PG-13 event?

If I can stomach this... 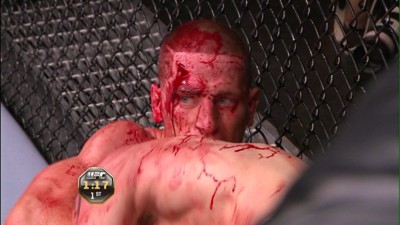 Then I doubt overhearing a couple of "fucks" and "shits" in the background and seeing more repeated replays of KO's are going to harm me.

Finally, while the transfer is otherwise okay, for a milestone event, the extras on this disc (and the Bluray) are nothing beyond the norm. This disc is getting a "rental" for the censoring. If this increased snipping and bleeping is going to become the norm, I'm willing to bet the UFC will lose some DVD buys due to more tech savvy hardcore fans just copying their ppv. If Zuffa and Co. dont want that to happen, I suggest they start treating their fans like adults.