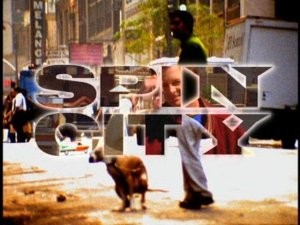 It has been many years since I have seen Spin City. I remember watching it as it aired and the occasional re-run. I always loved Michael J. Fox in it, although Charlie Sheen was also a riot. As for this review, I dived into season three with high expectations--expecting to laugh myself silly. For the most part, I did just that. Spin City, while a slightly dated sitcom, still had a humorous edge with fun moments and episodes. Of course, there were a few rough spots, but generally an all-around solid season.

The season starts with the episode "Dead Dog Talking". Mike prepares the Mayor to make his announcement to run for reelection. At the same time, Mike crosses paths with Heidi Klum and they are photographed together in the tabloids. In the following episode "There's Something About Heidi", they go on a first date. The situation only fuels Mike's ego. In "Gone With The Wind", she asks him to keep their relationship under the radar, which he fails at by announcing it to the press. Heidi returns again in the two-part season finale "Klumageddon". While Mike was starting a short-lived relationship with the supermodel, Nikki started to face her feelings for him. She continues to pine over him as the season progresses. In "Quest For Fire", Mike overhears her talking about him, but she covers it up with a fake boyfriend named Arthur. Unfortunately, Mike wants to take them out to dinner. Nikki rushes to find the right fake boyfriend, who she based on King Arthur. Oddly enough, she finds him. When Mike realizes Nikki has feelings for him, he reciprocates. He's just too late, as Nikki and the real Arthur (Sam Robards) hit it off. The Mike-Nikki-Arthur love triangle plays a significant role in future episodes.

"Three Men And A Little Lady" introduces reoccurring character Deidre (Beth Littleford). She is Stuart's new girlfriend, and surprisingly, not a catch. He sticks with her for the sex. She makes for an interesting character, especially in the episode "Dick Clark's Rockin' Make-Out Party '99!", when she files sexual harassment charges against him. She makes a few other appearances. While not the most impressive character, acting like the female version of Stuart makes for a few good laughs. "Monkey Business" is a silly episode that analyzes the friendship between Stuart and Carter. They meet neighbors who are similar to them. They are male couple who spent their lives together and eventually became involved -- despite one being a homosexual (like Carter) and the other a heterosexual horn dog (like Stuart). The newfound neighbors give a comical insight into their future. This episode guarantees laughs.

"Back to the Future IV: Judgment Day" is another strong episode, which is due to its guest star. Christopher Lloyd plays Mike's former mentor, who is a little nutty. He believes he is the messenger of God, and takes his new position as the head of big project to spread his message. The fun from the episode comes from Lloyd and Fox, who have great banter together and also include a lot of references to Back to the Future. As for the rest of the season, there are a number of fun and silly developments. Some of them include the Mayor dating Janelle, Carter and Stuart befriending each others' exes, Paul and Claudia asking Mike for a sperm donation, James being courted by an older woman, Mike dealing with his friend's sexual orientation, and more.

Overall, Spin City's third season is fun. I had a good time reliving the show, as it has been several years since I have watched an episode. I really enjoyed the diverse and goofy cast, as they tend to find humor at every corner. For the most part, this show has aged pretty well and should continue to offer lots of laughs. Of course, there were a few dry parts such as some of the characters' neurotic personalities being a little too over the top. In the end, if you are you looking for a silly sitcom with a solid cast, Spin City's third season is worthwhile. 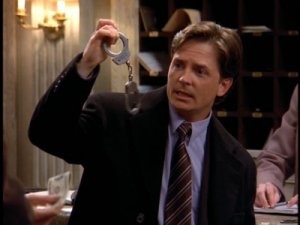 1. Dead Dog Talking: Mike feels guilty about wrongfully accepting credit for saving a baby. Carter takes in his parents' old dog without clearing it with Stuart. Stacey tries to out Paul for stealing sick time.
2. There's Something About Heidi: Mike begins dating Heidi Klum after a picture of them sparks interest from tabloids. Nikki admits to Carter that she has feelings for Mike, and the Mayor tries to overcome his laughter.
3. Gone With The Wind: Heidi Klum asks Mike to keep their new relationship a secret, which he finds difficult to do. James grieves for his "Aunt Sarah", a cow.
4. The Deer Hunter: Mike, Nikki and Carter are surprised when a fund-raising golfing trip turns into deer hunting. With Mike out of the office, Stacey assists Stuart, and Paul campaigns for a raise.
5. It Happened One Night: Mike becomes attached to an abandoned baby, causing Nikki to fall harder, while his ex-girlfriends voice their opinions of him.
6. Three Men And A Little Lady: The Mayor's poor pitching makes his image suffer, and it's only worsened when he, Mike and Paul are mugged by a teenage girl. Stuart falls for a woman just as loathsome as he is.
7. An Officer And A Gentleman: Mike has a difficult time adjusting when he discovers that his childhood friend is gay and interested in Carter. Paul teaches Stacey how to be thrifty.
8. Quest For Fire: Nikki makes up a boyfriend to cover her feelings for Mike but finds herself in a bind when Mike invites the couple to dinner.
9. The Kidney's All Right: Mike finds himself competing with Nikki's new boyfriend to donate a kidney. Paul is bullied by a new reporter in the press room.
10. Gobbler The Wonder Turkey Saves The Day: The Mayor hosts a live televised Thanksgiving dinner and proceeds to hide in the kitchen away from his father and the cameras. Paul uses the camera time to advertise for the local businesses that provided him with goods.
11. Local Hero: Mike sets Stacey up with a Councilman whose vote he needs. Nikki is caught in the middle of Stuart's relationship with when his girlfriend thinks he's cheating.
12. Monkey Business: Carter and Stuart freak out when they meet new neighbors who are just like them 30 years later. Mike offends a smart chimp given to the city's zoo.
13. Taxi Driver: One small lie leads to a cabbie strike when mike finds out that Nikki and Arthur haven't slept together yet.
14. The Nutty Deputy Mayor: On the week of the Annual Charity Bachelor Auction, Mike faces a potential political problem with a special interest group representing obese people. The Mayor seeks dating advice from Paul and Carter.
15. Not In The Line Of Fire: When a series of exploding balloons causes a panic at a live media event, the Mayor accuses Mike of diving out of the way to save his own skin.
16. Internal Affairs: Mike and Nikki's attempt to consummate their secret romance leads to Nikki's arrest for soliciting sex.
17. Dick Clark's Rockin' Make-Out Party '99!: When Stuart finally gets up the nerve to dump Deidre, she retaliates with a sexual harassment suit against him.
18. Back To The Future IV: Judgment Day: Mike pulls his political mentor, Owen (Christopher Lloyd), out of retirement to help coordinate New York City's year 200 event. Everything appears to be going fine until Mike discovers that Owen thinks he is the Messiah.
19. Politically Incorrect: Nikki pressures Mike to tell the office about their relationship. The Mayor appears as a guest on Politically Incorrect, where, in an attempt to prove he's not a racist, he reveals that he's dating Janelle.
20. That's Entertainment: Everybody's eager to get home to watch the Academy Awards on TV, but Mike keeps the whole staff working late. A flashback show.
21. The Last Temptation Of Mike: Paul and Claudia, who have been having difficulty conceiving, ask Mike to donate his sperm.
22. Carter & Stuart & Bennett & Deidre: Carter decides to breakup with Bennett the boxer. Stuart decides to become Bennett's best friend because he wants to go to a famous boxer's training camp. Carter then befriends Deidre (whom he hates) as a way to get back at Stuart.
23. The Mayor With Two Brains: Mike gets upset when Carter inadvertently steals his thunder in a magazine interview.
24. Wall Street: Mike tries to teach James about the stock market and, through a series of bad decisions, loses James's $20,000 life savings. The Mayor has an action figure made in his image.
25. Klumageddon, Part I: While Nikki's sick in bed at Mike's apartment, Heidi Klum returns to City Hall to participate in an animal rights campaign and puts the moves on Mike.
26. Klumageddon, Part II: Janelle decides to break up with the Mayor and asks Mike to handle it for her. Nikki, still raw from Mike's comment about Heidi, ends up breaking up with Mike after overhearing him discussing the situation with the Mayor and Janelle. 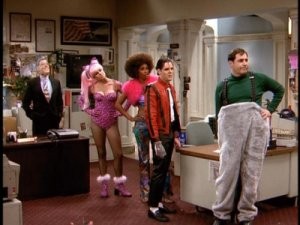 
Video:
The video format is given in its original aspect ratio 1.33:1 full frame color. The overall quality is acceptable. There is a noticeable grain in the picture, as well as some traces of compression artifacts. Overall, while not outstanding, the visual representation is still good.

Audio:
The audio track in this release is given in English Dolby digital stereo sound. The audio sounds pretty clean and is very flat. It is as basic as TV on DVD releases get. This release also supports closed captioning.

Final Thoughts:
Spin City is a show that I have not seen for some time. I was excited to watch season three and found the experience to be good. The episodes, despite their age, are still quite funny. There are a number of fun plotlines to follow as the characters deal with professional and personal issues. At the same time, there were moments and character personalities that came off too strong. Despite, there were more laughs than not and it is worthwhile to sit through the entire set.