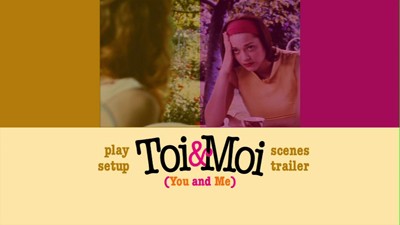 Love stories can be sappy regardless of the language, so just because your actors are speaking in French doesn't mean you can get away with pretentious, ironic commentary. Writer/director Julie Lopes-Curval would have us believe that because she knows the contrivances of her 2006 Toi & Moi are totally predictable, the playing field is clear for her to toy with them until her romantic heart is content. Not so, Julie! Not so!

Julie Depardieu stars as Ariane, the author of cloying photo comics in the romance magazine Toi & Moi. Her scripts tell the twisty tales of lovers in peril, of heartbreak and the easy soothing of class division that comes with unexpected, but apparently all-too regular, financial inheritance. The implication of the fantasy is that the windfall of love will cure all. Scoundrels will be routed, and an endless supply of rich aunts and uncles will fall so that even the lowliest gardener may find love.

Of course, Ariane is no good at making her own daydreams real. Her long-term love affair with Farid (Tomer Sisley), a Muslim whose commitment issues may be faith, but may also just be down to him being a jerk, leaves her confused and alone most of the time. Her sister is no better. Lena (Oscar-winner Marion Cotillard) is a cellist who is content to be in the orchestra where she can fade into the music, rather than a soloist out front. She has settled into a similarly anonymous relationship with Francois (Eric Berger), a schoolteacher. That is until she meets handsome violin virtuoso Mark (Jonathan Zaccaï), who hears the music in Lena that no one else hears. Skyrockets in flight!

It's a plot twist right out of one of Ariane's fumettis, and just in case we don't get it, Lopes-Curval shows us the love story of the two musicians recast as one of the photoplays. This is part of a series of ongoing interludes throughout the movie, the "real life" of the narrative shown in brightly colored stills, the events of the lives around Ariane filtered into her art. This is what I mean by ironic commentary: we know that Lopes-Curval and co-writer Sophie Hiet know that this stuff is silly. It's right there! Francois even makes fun of it, and Ariane's editor argues for it to be even more ridiculous. But Francois is a square and the editor is a bean counter, so we aren't actualy supposed to be on their side even though we think they are right. The post-modern stuff is there so it's all good when the handsome Spanish stoneworker (Sergio Peris-Mencheta) who is laboring outside Ariane's window turns on the charm. Here comes the working class to sweep that smart gal off her feet. Tres, tres ironic, non? It wasn't the poor becoming rich, they were rich all along....

It's an unnecessary conceit, and to be honest, it makes Toi & Moi come off as a little lazy. The comics give Lopes-Curval a shortcut around the difficult stuff. She wastes a very good cast on trite scriptwork. The basic plotting is fine, this story could work, but there is never any real passion nor any real gravitas to make it more than any other average romance film on the market. The fact that--*spoiler alert*--one sister gets a happy ending while the other doesn't is no salvation, either. Again, there's that wink. Lopes-Curval might as well appear and point it out. "You see what I did? You thought it would be all sentimental, but only one girl inherits her true heart's fortune." Blech.

My main attraction to Toi & Moi was Marion Cotillard, who was so good in Ma Vie En Rose. I wanted to see her play a character who was more conventional than Edith Piaf. She doesn't disappoint, she's very good here. Lena couldn't be more distant from Piaf. The singer used music as an outward expression of pain, whereas this cellist uses it as something inward, a shield to hide behind. This performance is all understatement, and Cotillard is charming and heartbreaking in ways that transcend the material. Her co-star, Julie Depardieu (daughter of Gerard), has the more thankless role. Ariane is a little cloying, a little too much like her readers. The actress is good with the cute stuff, but the writing is so thin, that's about all she has. The men are all equally underutilized. They seemed like good actors, they just don't have much to do.

Not much ado about anything. The love story Shakespeare was too bored to write. Toi & Moi is fine as these things go, a straight shot down the middle of love's highway. The girl you like but not enough to ask out. 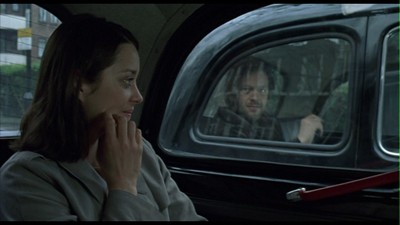 Video:
The anamorphic 1.85:1 transfer of Toi & Moi is far more passionately rendered than the film's story. The colors are rich and beautiful, with the fumetti in particular popping right off the screen. The image is clean, there are no problems with compression or digital rendering, and overall, this is a pretty impressive release for a small foreign picture.

Sound:
The original French soundtrack is mixed in Dolby stereo, with optional English subtitles. The mix is solid, with fairly good volume and tones, nothing special to distinguish itself to the good or the bad.

FINAL THOUGHTS:
Toi & Moi is a movie about characters who hedge their bets when it comes to love, who are too busy laughing at the romantic fantasy to fully embrace it, and the ironic tone that writer/director Julie Lopes-Curval shoots for achieves its biggest irony in that it becomes everything it means to critique. I think that's her hedge, that she hoped that by wearing the clichés out in the open, she could get away with them. I'm not buying it. Still, Toi & Moi is not so terrible as to totally hate it, and Marion Cotillard is wonderful as one of the shy sisters looking for amore. Rent It. 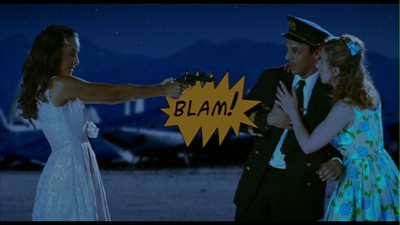