Lionsgate Home Entertainment // R // August 11, 2009
List Price: $19.99 [Buy now and save at Amazon]
Review by Stuart Galbraith IV | posted September 12, 2009 | E-mail the Author
Bland and predictable with a script that really strains suspension of disbelief and loaded with uniformly unlikable characters, Replicant is nonetheless considered one of star Jean-Claude Van Damme's better films, though that's not saying much. Performance-wise, he's just fine and some of the action scenes, while limited in number, deliver well enough, but the supremely goofy script is as illogical as it is (at times) unpleasant. 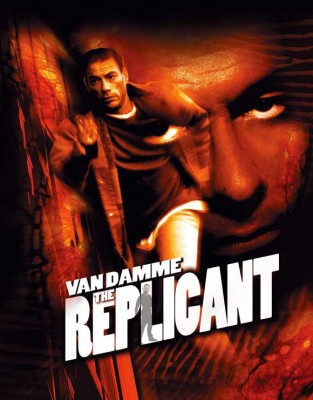 Under the opening titles, the film gets off to an unnecessarily graphic and distressing start: serial killer Edward "The Torch" Garrotte* (Van Damme) murders a young mother and sets her fresh corpse afire while her toddler son looks on, just a few feet away. (This is not what you would call a good First Date Movie.) Retiring Seattle police detective Jake Riley (Rooker) arrives just in time to save the tot from being burned alive, but Garrotte slips past the police dragnet.

A short time later Riley, who as Rod Serling liked to say has a chip on his shoulder the size of the national debt, is invited to a top secret government agency where, using a hair follicle found at one of Garrotte's earlier murder scenes, they've been able to use the serial killer's DNA to create a perfect living replica (also Van Damme), fully-grown, who hatches out of a pod-like egg-thingy with fetal-positioned, naked Van Damme covered in slimy afterbirth (or something).

Why-oh-why, you ask, would the federal government be spending millions of hard-earned tax dollars cloning serial killers? Well, apparently this is just a test, so they say. The real purpose is to clone international terrorists. Uh, okay.

Replicant, as Van Damme's second character is billed, has the body of an adult but the clean slate mind of a newborn. After being taught the basics like walking and learning what a table is, Replicant is handed over to Riley to see if the surly former lawman can trigger serial-killing memories buried deep-down in the clone's subconscious: "Do whatever it takes to awaken the killer inside," says one Fed. No one seems to consider that this might not be such a good idea, but soon enough, with Replicant dressed kids-style, like Robin Williams in the vaguely similar Jack (Van Damme gamely wears comical deck shoes), the unlikely duo make the transition into suburbia like Ronald Reagan and Bonzo the chimp.

Riley takes Replicant to meet the wife and kid, though regrettably he does not say, "Honey, I'm bringing home a cloned serial killer to stay with us for a while." Eventually, Replicant not only starts having flashbacks (flashreps?) of Garrotte's crimes, there are hints the two are psychically linked as well and that Repilcant can anticipate his genetic twin's actions.

If all this sounds extraordinarily goofy, it is. The sci-fi angle has such disregard for basic concepts of science and fiction that at times the film takes on a loopiness akin to The Man without a Body and other famously bad '50s sci-fi cinema. It's like Rain Man re-imagined as a sci-fi thriller about a serial killer. In one scene the two Van Dammes are mistaken for identical twins, suggesting maybe that a less fantastic approach might have resulted in a far more believable and dramatic, if less high-concepty movie.

Though both Van Damme and Rooker (himself best known for the title role in Henry: Portrait of a Serial Killer, a superior if deeply disturbing film) give decent performances, their characters and situations are consistently ridiculous. Rooker's Riley unaccountably is incredibly pissed off all the time in this film, his dialogue a constant, funny stream of profanity: "Welcome to my world, motherfucker!" he says in one typical exchange.

He also hates Replicant for no good reason, especially considering the clone spends most of the film cowering in a corner like an eager-to-please puppy that's just been scolded for peeing on the rug. Not helping matters is that Riley mainly barks orders at Replicant as if it were an unruly pet: "Sit!" "Stay!" he growls.

The lunacy of the script might have made for a fun night at the movies, but the film goes overboard on the violence. (Mild Spoilers) In one scene Garrotte shoots his dead mother's corpse multiple times, knocks over several sick people in wheelchairs and an old lady hooked up to an I.V., and he kicks a nurse in the stomach, all in the space of about 30 seconds.

Despite all this, the picture does offer a couple of good action scenes, including an impressive chase through a parking garage, and the end of the film is almost sweet, though its epilogue makes no more sense than the rest of the film.

Filmed for 1.85:1 widescreen, the 1.78:1, 1080p presentation of Replicant generally is okay, though when there's a lot of fast-motion within the frame, it looks like some digital tweaking was done, as if to artificially sharpen the image during blurred, out-of-focus action. Whatever this effect, it results in a kind of video blurring that's distracting instead of enhancing. Generally though, Replicant looks okay. Audio is 5.1 DTS-HD, good for a picture like this when the noisy sound effects and music burst out in scattered scenes; English and Spanish subtitles are also available. The disc is encoded for regions A, B, and C.

Supplements include about 20 minutes of deleted scenes, all from a 4:3 matted second-generation video source with time code. An eccentric Van Damme and surprisingly enthusiastic and more formal Rooker, obviously interviewed separately, contribute an audio commentary, with Rooker having much more to say than his co-star, much like the film. Storyboards and a photo gallery are also included, accompanied by annoying menu-generated "pu-eeeeep!" beeping noises you'll want to shut off before you're through.

Fans of this kind of film won't be disappointed, I suppose, though this reviewer is still waiting for a worthy heir to Charles Bronson's wonderfully trashy Cannon films from the 1980s and early '90s. Replicant isn't far off, but I'd Rent It.


* Sergei Hasenecz suggests, "Someone stayed late to come up with this name. Not only does he have a nickname indicating his preferred killing method, his last name is another way to kill. How clever... Though I suppose they could have called him Edward 'The Torch' Butcher-Knife."