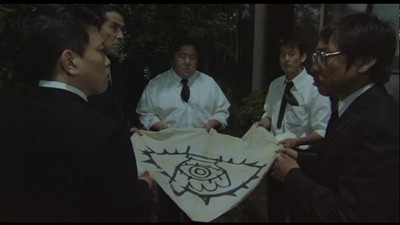 My name is Jamie S. Rich, and I am a Naoki Urasawa addict. I am not ashamed, and I don't want to quit. I have been gobbling up his manga since Viz started translating his epic thriller Monster a couple of years ago, and if their grinding publishing schedule has adversely affected my life by causing me to stay in on a particular night so I can read the newest release, then so be it. I don't care. I read 20th Century Boys vol. 6 earlier this week, and they can't bring on vol. 7 fast enough.

To tide me over is the first part of the mammoth film trilogy adapting the 20th Century Boys comic book. There are 22 graphic novel volumes in the manga series, so that's quite a lot of story, even for three movies. This first part, Beginning of the End, is essentially a compressed version of the first four books with a few tastes on of the fifth and sixth. Readers will recognize just about everything as something we have already seen in the comics, including particular angles that are evocative of the Urasawa storytelling style and even a few faces here and there that look like they have come right out of the artist's sketchbook.

20th Century Boys is the story of a group of childhood friends who in 1999 discover that the doomsday stories they made up as kids are starting to come true. Deadly viruses, airport bombings, and the rise of the Friends, a dangerous political cult, all parallel a fantasy they once concocted, and it seems that one of their numbers is behind it. The center of the group is Kenji (Toshiaki Karasawa), a one-time would-be rock star who wrote the "Book of Prophecies" that laid the groundwork for the current crisis. Kenji has settled into a quiet life working at a convenience store with his mother and watching after the baby girl his sister left them with. One pal's death and mysterious notes make Kenji suspicious, and he begins to gather the old gang around him.

The further the plot goes, the more complicated it becomes. As in the book, the movie version of 20th Century Boys moves back and forth between past and present, and some of the finest moments in both media are the ones featuring the little kids. The camaraderie of childhood, with its humor and its cruelties, is perfectly captured by director Yukihiko Tsutsumi (Happily Ever After). He also makes the transitions between then and now easy to follow, even when he's not using a title card with the date. In terms of his film, Tsutsumi is fully in control. 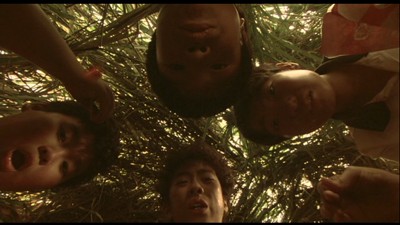 Unfortunately, being trimmed down so much, the story has lost some of its personality. The amazing thing about Naoki Urasawa is how effortlessly he builds complex plots that take time for character digressions without ever dropping any of the many narrative balls the auteur is juggling. Producers of television shows like Lost and Heroes would do well to study his work, actually, as he consistently makes them look like amateurs. The manga creator can take his readers fifty miles away from their original destination, but he always gets them to where they are going without them ever realizing they took a detour.

Alas, these digressions are the first thing to go when it comes time to drop some weight. So, while one volume of the manga is devoted almost entirely to Otcho's badass adventures in Thailand, the movie merely gives us one scene of the tough guy (played by Etsushi Toyokawa) doing what he does before Kenji summons him home to Tokyo. Gone is the image of Otcho as a noble hero who will go out of his way to right wrongs. Gone are the demonstrations of his considerable skills. We also lose quite a bit of insight into one of my favorite characters, Yukiji (Takako Tokiwa). We see less of her as a young tomboy, and so we feel her disappointment in life less. We never really get a full sense of her relationship with Kenji, and so we lose her disappointment in him. Likewise, the backstory about the police detective who gets too close to the Friends and succumbs to their germ warfare. Now he is a footnote scene.

I assume it's possible for first-time viewers not to have these problems. If you aren't aware that something was supposed to be in 20th Century Boys 1: Beginning of the End, then it's kind of hard to miss it. Yet, I fear that the absence of the better character elements might make Beginning of the End seem slight. If you don't have as much to be invested in, it might be hard to tell what all the hubbub is for. How much of this movie resonated with me only because I was already familiar with what was going on?

Even so, 20th Century Boys 1: Beginning of the End is an entertaining enough piece of fluff entertainment. Yukihiko Tsutsumi does a good job of creating an alternate version of turn-of-the-century Tokyo, and his actors come to embody the characters. Many of the smaller roles, in particular, are impressively cast to look just like their comic book counterparts. The few digital effects in the movie don't look very good (just a few steps above one of those crappy SyFy original movies), and the action at the climactic New Year's Eve battle is a bit too chaotic and unclear for my taste, but I'll still sit and watch 20th Century Boys 2. Be warned, though, this is one of those first installments of a trilogy that largely just sets up the rest, and it does end on a cliffhanger. I can't guarantee you'll be addicted the way I am hooked on the comics, but it could be the start of something good if you want to try. 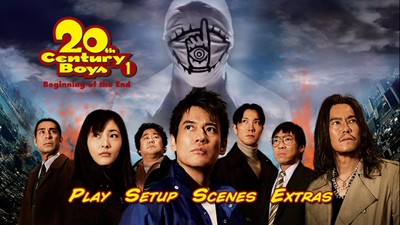 Video:
Viz brings 20th Century Boys 1: Beginning of the End to DVD in a 16:9 anamorphic transfer preserving its 1.85:1 aspect ratio. It looks pretty good throughout, with strong colors and blacks. There was some occasional static in the image, and a little digital combing, but all in all, a good effort.

Sound:
The Japanese-language soundtrack was mixed in 5.1 and 2.0 and there are optional English subtitles. The audio track is very good with impressive volume levels and no distortion. 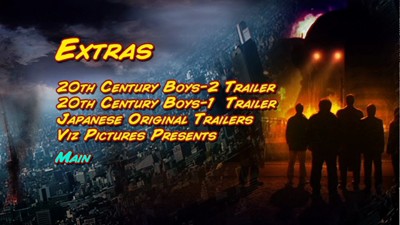 Extras:
The extras on disc include trailers for the Japanese and English release both, as well as Viz promotional trailers.

20th Century Boys 1: Beginning of the End comes in a standard plastic case. It has three paper inserts, one featuring info on Naoki Urasawa and short bios of the main cast members and directors. The other two inserts are advertisements for various products.

FINAL THOUGHTS:
Recommended. Though 20th Century Boys 1: Beginning of the End isn't nearly as good as its comic book source, this Japanese adaptation is still pretty entertaining. The complicated story of a vast conspiracy growing out of the childhood musings of a group of Tokyo-based friends moves swiftly and has a lot of compelling sidelines. Fans of the manga might find it too streamlined, but it does serve as a good refresher on the comics. Those who haven't read the books likely will be fine with everything, though keep in mind, this is the start of the trilogy, and the ending of part 1 makes no bones about the fact that this tale is far from over. 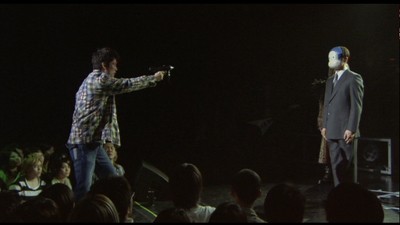