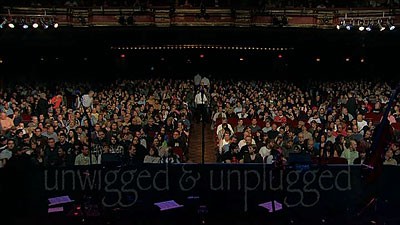 
The Show
I'll say right off the bat that this is probably going to be one of my least biased reviews to date. As a diehard fan of Harry Shearer, Michael McKean and Christopher Guest, I have watched some questionable shows and movies with a smile on my face, simply to enjoy their work. Then, of course, there are the masterpieces, which include their classic movies This is Spinal Tap, Waiting for Guffman and A Mighty Wind. I don't even hold the crappy mockumentaries they inspired against them. My love is steadfast.

Naturally, a concert film featuring the trio performing their "hits" would be right up my alley. That said, I don't actually like the music of Spinal Tap. Sure, the songs are funny, and they are spot-on mockery of heavy metal, but not a one has a spot on my Zune. I just don't dig them. But that was before Unwigged & Unwigged. Hearing the songs performed live acoustically (without the silly costumes) gave me a new appreciation for them (along with the fact that they were mixed in with the GMS songs I love, making them far more palatable.) "The Majesty of Rock" is actually damn good here. 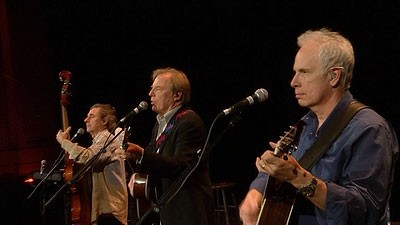 All three men (who, for their ages, look and sound terrific) are consummate entertainers, and the way they hold the stage with little more than their instruments (and occasional support from the video screen behind them) is a delight. The banter they share between songs is possibly honed to perfection from years, nay, decades of performing together, but the presentation is sharp and fun, so who cares? That same application of practice makes perfect has resulted in wonderful music, and no one is going to complain about that, especially when it gives you performances like "Never Did No Wanderin'." If you had no idea who they were, it would be easy to think music is their day job, and they just happened to be funny guys also.

There's not a song I can think of from the films that seems to be missing from the show, which was shot in the fall of 2008 in Milwaukee. In addition to some lesser-known songs, like the Elvis-themed "All Backed Up" and the in-joke "Saucy Jack," the set list also includes songs the three didn't make famous, like the beautiful, Oscar-nominated "There's A Kiss At the End of the Rainbow" and the brilliantly fundamental "The Good Book Song," both performed by others in A Mighty Wind. Here, and on a few other tracks, they are assisted by some quite-able guests, singer Judith Owen (Shearer's wife) and actress Annette O'Toole (McKean's wife), as well as instrumental backing from their producer CJ Vanston. O'Toole is perfectly powerful on "Good Book" while Owen's voice seems to crack a bit on "A Penny for Your Thoughts" (from Waiting for Guffman), but both add to the fun feel of the show, with Owen throwing in a bonus, and highly-appropriate, dance performance.

Speaking of throw-ins, this is hardly just three guys (and two women) singing. Video clips, including the short "Cheese Rolling" and some fan videos, play between some songs, while the group offers up a reading of the NBC censor's notes for the first broadcast of This is Spinal Tap, as well as an audience Q&A session (not to mention the 3-D experiment.) Like mentioned previously, these three are veterans of entertainment, and they know their audience, which makes the set more fun than one can reasonably expect from an acoustic concert. 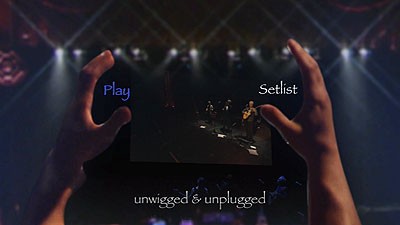 The DVD
Packed in a clear, standard-width keepcase, with a double-sided cover and insert with credits and a note from Shearer, this one-disc release features a mildly-animated, anamorphic-widescreen menu offering options to watch the show or select songs. There are no audio options, no subtitles and no closed captioning.

The Quality
The anamorphic-widescreen video looks great, with a great deal of fine detail in the close-ups, which are sharp and impressive. Some of the wider shots look a touch soft, but still offer the same appropriate color (along with a touch of video noise) while there are no issues with compression artifacts.

The disc features a Dolby Digital 2.0 track, which does a fine job of presenting the music and on-stage chatter, but it doesn't give that on-the-scene feel you can get from a good surround mix that puts you in the audience. The audience's role in the mix is a bit subdued, leaving the audio

The Extras
Sadly, not a one. 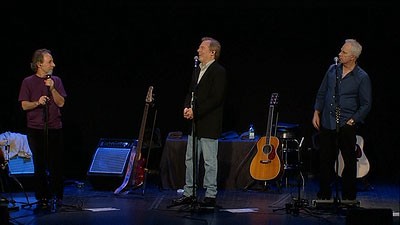 The Bottom Line
What a fun time. That's seriously all it comes down to. Listening to these guys play and sing and talk, like a trio of old friends hanging out, is simply enjoyable, as their musical abilities are just as impressive as their comedic skill. The DVD may not have any extras, but it's over two hours long and it looks and sounds very nice, so you can enjoy the experience you may have missed out on during their 2008 tour (or revisit it if you had a ticket.)