Other // Unrated // December 15, 2009 // Region 0
List Price: $29.95 [Buy now and save at Amazon]
Review by Stuart Galbraith IV | posted January 20, 2010 | E-mail the Author
Sometimes a documentary's subject is so innately fascinating that a strong film is a foregone conclusion. Such is the case with Dominick Dunne - After the Party (an Australian production first exhibited there in 2008 as Celebrity - Dominick Dunne), a film released not long before its subject's death from bladder cancer last August at the age of 83. Dunne's life story is a veritable goldmine of captivating material, a life fraught with star-studded glamour, murder, mystery, and personal tragedy while Dunne himself, a terrific observer and raconteur, is captured on-camera and the center of this well-timed film, which presents Dunne's life and its myriad contradictions, revelations, and introspections in a well-organized, well-paced manner.

Indiepix's Collector's Edition is a two disc set highlighted by more than 90 minutes of additional and extended interviews, most as fascinating as that found in the final cut of the picture. 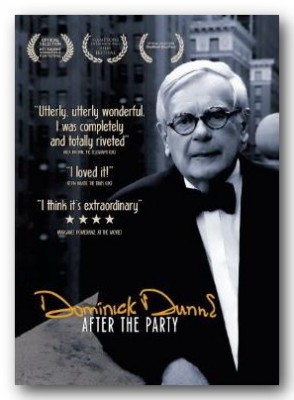 Dunne is best-known today for his Vanity Fair articles, generally coverage of celebrity criminal trials, most famously those of the Menendez Brothers (who murdered their wealthy parents then tried to justify their violence by claiming years of sexual abuse); football star and actor O.J. Simpson, later found liable for the wrongful death (read: murder of) Nicole Brown and Ronald Goldman; and, at the end of Dunne's career, music producer Phil Spector, eventually convicted of murdering actress Lana Clarkson.

However, the aptly-named After the Party is primarily concerned with Dunne's transformation from the giddy, and later obsessive starfucker and TV/film producer of the 1960s and '70s into the accomplished writer of the '80s and beyond, whose niche was exposing the hypocrisies and special treatment accorded to the same type of powerful celebrities he once so admired and, on some level, once was himself.

The film traces Dunne's early life as an unlikely war hero (eventually awarded the Bronze Star) who quickly rose through the ranks of television in that medium's formative years from floor manager to producer, and whose marriage to a beautiful heiress, Ellen "Lenny" Griffin, thrust him into the top tiers of society and celebrity hob-knobbing.

Moving to Southern California, Dunne was like a giddy schoolgirl who couldn't believe his luck; his parties attracted all the biggest stars: Grace Kelly, Steve McQueen, Rock Hudson, and Natalie Wood. He eventually produced the popular Adventures in Paradise for television, and movies like The Boys in the Band and Panic in Needle Park, but his marriage collapsed under the weight of Dunne's neglectful parenting, his low self-worth, and obsessive need to entertain.

He drank and started dabbling in marijuana and cocaine, and flying back from Mexico he was arrested for trafficking pot, but according to Dunne himself he escaped prosecution because of his celebrity connections. Nevertheless, after insulting powerful agent Sue Mengers his career as a producer was finished overnight, and he lost all his money.

Dunne rebounded writing fiction, that is to say thinly disguised fiction drawing upon his insider perspective on the rich and famous, beginning with The Two Mrs. Grenvilles in 1985.

However, it was the murder of his only surviving daughter, actress Dominique Dunne (of Poltergeist fame; Dominique's two sisters having died in infancy), which shaped the final third of Dunne's life. He became an advocate essayist who in particular focused on the toll murder trials took on victims' families, and how wealthy celebrities perverted the judicial system through their use of bought-and-paid-for "expert" witnesses and powerful celebrity attorneys who too often sought to blame the victim.

This dichotic attitude toward celebrity is foreshadowed in the film's first scene, where Dunne describes a '60s encounter with Frank Sinatra, who used his power and fame to get a maître d' to punch Dunne in the face for the sheer pleasure of it, humiliating Dunne so profoundly that his hatred of Sinatra, no matter his skills as "one of the great voices," is still palpable decades later.

Reflecting on his past, Dunne admits to being "kind of like a phony," who for years embraced an empty, unsustainable lifestyle and that he was largely responsible for the break-up of his marriage. And so over time he became - and this is what made him so attractive for television interview programs - the once and future insider reporting the unvarnished truth of celebrity's dark side.

Though the film boasts on-camera interviews with friends and colleagues as varied as producer Robert Evans and writer Joan Didion (Dunne's sister-in-law), it's Dunne who completely dominates the film. He's as critical of his own actions as frequently as he condemns others, and the film points to other flaws, such as his reckless reporting during the Chandra Levy disappearance and the media's focus on U.S. Representative Gary Condit, for a time the prime suspect in the court of public opinion.

Ultimately, Dunne comes off as a man transformed by tragedy and despair, who found an outlet for his bitterness through his writing, and in doing so, turned an empty life into a fullfilling one.

Dominick Dunne - After the Party is presented in 16:9 enhanced widescreen. The film seems to have been shot in a mixture of video formats, some of which don't transfer smoothly, at least not for this release. The frequency and severity are not enough to be more than a mild distraction, but there is some curious herky-jerkiness in some shots, like a PAL to NTSC transfer that didn't quite come off. (This problem is much worse in the special features.) The Dolby Digital 2.0 Stereo is adequate for a feature documentary of this kind, and the disc is all-region, though without subtitle options.

Disc 1 includes a pretty good audio commentary by directors Kristy de Garis and Timothy Jolley, but the real treasure trove are the numerous deleted scenes, 90-minutes worth, on Disc 2. These are helpfully categorized and are 16:9 enhanced, as is the excellent theatrical trailer that's included. Also there are about 16 minutes worth of Dunne's home movies, mostly from the '60s, but these are marred by an extremely poor video transfer, or at least one that didn't covert well from PAL. What's billed as "Excerpt from Book" (from Too Much Money as it turns out) is misleading as there's nothing of the sort on the DVD itself; instead it includes a link to Indiepix's website. A good still gallery, also 16:9, rounds out the satisfying supplements.

If you're familiar with Dominick Dunne's writing or his personal history, like me you'd reasonably suspect this would make for an interesting documentary, and you'd be right. After the Party is a terrifically engaging work, and Highly Recommended.