War Dogs of the Pacific 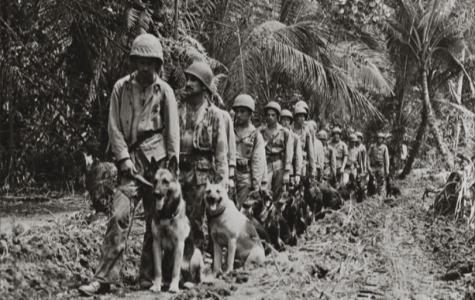 Animal lovers, make sure you have the tissues handy: Harris Done's War Dogs of the Pacific (2008) is a documentary designed to inform, entertain and tug at your heartstrings. This brief, 46-minute feature chronicles the story of canine companions during World War II...and the soldiers that loved them, of course. While other dogs were sitting at home, playing fetch and chasing squirrels, these brave pups undoubtedly saved the lives of dozens, if not hundreds of troops. Over 500 dogs were enlisted to aid the Americans in Guam and other parts of the Pacific, but a few dozen didn't make the return trip home---and though the emotions run high during this short documentary, it's a generally uplifting and informative affair.

Featured participants and other subjects include Pfcs. Edmund Adamski (who partnered with Doberman Pincer "Big Boy"), Albert Tesch (Husky "Tippy"), Richard Reinauer (German Shepherd "Rick"), Dale Fetzer (Black Lab "Skipper"), Bruce Wellington (Shepherd mix "Prince") and many more---and though the dogs obviously aren't around anoymore, these men speak highly of their former companions as they would any fellow soldier. Other related subjects include William Putney, the commander of the Third Dog Platoon, who put his medical experience to good use and continued as a vet(erinarian) after the war ended. Though the perspectives shift several times in just under an hour, War Dogs of the Pacific does an admirable job staying on target every step of the way.

Those who consider themselves more of history buffs than dog lovers should enjoy War Dogs as well. Several reels' worth of wartime footage is on hand, from the dogs' preliminary training to a handful of combat sequences and public relation photos...some in color, even. Overall, there's a great amount of information on display---and while WWII documentaries are practically a dime a dozen, War Dogs does a good job of covering a branch of the road less traveled. A memorial to the fallen dogs is even shown in Guam, though Harris Done's film doesn't always resort to swelling music and tearful flag-waving. This documentary occasionally goes for easy manipulation, but it's hard not to get caught up when the subject matter is this appealing and accessible. But again, have the tissues handy.

War Dogs of the Pacific arrives on DVD by Harris Done's own production company---and though it's a little light on content, this is a fine example of quality over quantity. The technical presentation is a bit uneven, while our sole bonus feature is a brief collection of wartime photos paired with music. Interested parties should consider it worth watching at least once...but for those still on the fence, more information can be found below. It goes without saying that War Dogs is relatively small in scope: this certainly wasn't the first time dogs were used in combat, and it wasn't the last. For the small window covered, however, it provides a good starting point.

Presented in its original 1.78:1 aspect ratio and enhanced for 16x9 displays, War Dogs of the Pacific looks a little rough around the edges. Obviously, the footage varies in quality: some of the WWII-era clips are in pretty bad shape (and cropped to fill the 16x9 frame, unfortunately), while some segments suffer from mild pixellation and edge enhancement. Additionally, the image is interlaced and digital combing is evident from start to finish; since much of the war footage is action-oriented, this can be distracting at times. The newly-recorded interviews and vintage photographs are generally clean, crisp and problem-free.

The Dolby Digital 5.1 Surround mix is somewhat low-key but still has its moments. Separation is strong and the narration comes through clearly, never fighting for attention with the film's occasionally dramatic score. Some of the action-oriented sequences drift into the rear channels, but these areas are generally reserved for the music. It's odd that an optional Stereo mix isn't on board, especially since this release is also geared towards classroom screenings. Unfortunately, no optional subtitles or Closed Captions are offered. 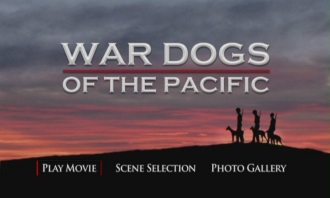 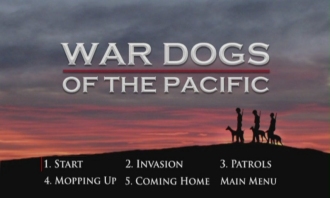 Seen above, the plain-wrap menu designs are simple and easy to navigate. The 46-minute main feature has been divided into a scant 6 chapters, while no obvious layer change was detected during playback. This one-disc release is housed in a standard black keepcase and includes no inserts of any kind.

Bonus Features
Not much here, just a self-playing Photo Gallery (1:46) with several dozen stills from the film and musical accompaniment. An interview or commentary with the director would've been nice, especially since this disc has a strict $20 price point.
Final Thoughts

Dog lovers and history buffs alike should be pleased with Harris Done's War Dogs of the Pacific; not only does it entertain and enlighten, but the wealth of vintage clips and photographs only enhances our viewing experience. Featuring interviews with several of the original WWII dog handlers, War Dogs presents its story in an organized and efficient manner...and it still feels more relaxed than rushed, even with a trim 46-minute running time. Unfortunately, this DVD release doesn't offer a great deal of support: not only does the technical presentation suffer slightly, but the lack of bonus features means you'll be finished within an hour. Still, what's here is worth watching more than once, so interested parties---especially teachers---shouldn't pass it up for lack of quantity. Mildly Recommended.