Troma // R // September 29, 2009
List Price: $9.95 [Buy now and save at Amazon]
Review by Stuart Galbraith IV | posted October 27, 2009 | E-mail the Author
It's tough being negative on what was obviously a labor of love for those involved with its release, but The Hanging Woman (1973), a Spanish horror-mystery featuring beefy genre heavyweight Paul Naschy in a supporting role, is a big disappointment. This Troma Retro release is crammed with the kind of extra features one usually associates with Blue Underground or Mondo Macabro, but the heaping helping of mostly good supplements is let down by the poor transfer, a mediocre effort that seriously damages the viewing experience. 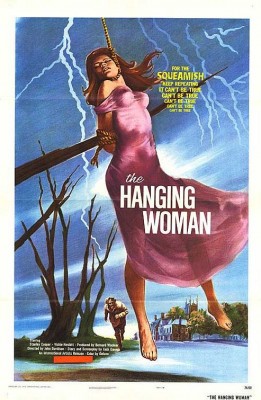 Details about the film are sketchy, to say the least. A Spanish-Italian co-production, it was released in Spain as La orgía de los muertos and Italy as La orgia dei morti (both titles translate as "Orgy of the Dead") but, possibly to avoid confusion with the Ed Wood-scripted film of the same name, was released by distributor International Artists (and perhaps others) under several titles, including Bracula (say what?), Dracula the Terror of the Living Dead (sic), Beyond the Living Dead, and Return of the Zombies. English press materials refer to the film taking place in 19th century Scotland, but the mountainous terrain of Lleida, in northwestern Spain (in the Catalonia region) where this was filmed looks about as much like Scotland as my street in Kyoto, Japan.

Phil Hardy's indispensable but problematic Encyclopedia of Horror Movies instead places the film in the Carpathians, which it much more closely resembles. The story concerns a young man, Serge Chekov (Italian Stelvio Rosi, billed here as Stan Cooper), returning to his ancestral home after his uncle, a wealthy count, succumbs after a stroke/brain tumor. Shortly after his arrival, his cousin is found hanged but an autopsy suggests that she didn't commit suicide - she was murdered.

Meanwhile, Serge becomes involved with his uncle's much younger wife, Nadia (Maria Pia Conte), a woman knee-deep into black magic; Professor Leon Droila (Gérard Tichy), a scientist experimenting with electricity to revive the dead; Ivan (José Cárdenas?), an impertinent butler who, in this English-dubbed release, speaks with a thick Australian accent; Doris (Dyanik Zurakowska), the professor's virginal daughter; and Igor (Naschy), combo gravedigger and, conveniently, grave-robber who pals around with the rotting corpses he digs up and, it's implied, engages in necrophilia.

The problematic transfer really intrudes on one's ability to assess this film's attributes fairly, so the rest of this review will integrate comments about the transfer with more thoughts about the film.

Directed by José Luis Merino, The Hanging Woman shows promise, but the poor transfer can really only hint at its qualities. At a time when companies like Blue Underground and (the late, lamented) BCI have started releasing classic Euro-horror titles to Blu-ray, Troma's throwback release is about on par with Retromedia's junky gray market transfers. Presented as "The Final Cut," The Hanging Woman is a murky full-frame transfer from a theatrical print complete with reel change cues, splices, and a lot of damage at the head and tail of each reel. The film was either hard-matted or over-scanned during the Telecine process, because the credits are lopped off on the sides (e.g., And with...Paul Naschy as "Igo). Worse, there's a lot of digital artifacting and video noise throughout; one good scare when Naschy's Igor opens a coffin is ruined because at that point the video transfer goes all haywire for a few seconds. This version runs 95 minutes and may be complete, though other sources list running times of 97-99 minutes, and some or all of this transfer may be sourcing PAL video masters. (The end credits are in Spanish).

Although the extras include clips from the Spanish-language version, the presentation here is English-only, and this dubbed version leaves a lot to be desired. Apparently in an effort to fool audiences into thinking they were watching a Hammer-type production, the dubbing lapses into laughable British stereotypes. Favorite line: "By gads! Ladies underwear - the scoundrel!" The score, credited to Francesco De Masi, is ineffective, but for all we know it may have been altered or replaced for this version.

Though cheaply made - some obviously anachronistic pistols and surgical instruments reveal this, among other things - The Hanging Woman, even in this severely compromised form, has as Naschy describes it in his interview, "excellent ambiance." The Lleida locations are spectacular and enormously atmospheric; Spanish and Italian horror filmmakers generally knew how to take full advantage of the geography and period buildings around them. The extravagantly gory makeup for the variously walking corpses is extremely good by early-1970s standards, better than just about anything being done genre-wise at this time. There's the count's maggot-ridden corpse, a stitched-together body post-autopsy, footage of dead flesh being cut with a scalpel; its "R" rating in the U.S. was earned.

Though a bit sluggish, the film also works reasonably well as a mystery, with one pretty clever clue explained in the almost classical dénouement.

As for Naschy, he has a good supporting part, one that affords him no less than three death scenes. He's not the star by any means, but his fans won't be disappointed.

It's too bad the transfer is so poor, as what appears to be several different production companies contributed a variety of supplements. These include on-camera interviews with Paul Naschy (running 14:30) and director José Luis Merino (21:39). Both are in Spanish with English subtitles, in 16:9 enhanced widescreen, and more than a bit static (with awkward editing to try and overcome this). Director Merino expands on his comments in the English subtitled audio commentary, while Shane M. Dallman hosts Paul Naschy 101, a brief overview of the actor's career. A battered U.S. trailer, also full frame, is included, along with much superior lobby cards, poster, and other ad art from various countries.

Strangely, also included is an entire second feature, The Sweet Sound of Death (La llamada, 1965), an ultra-cheap horror-romance melodrama also made in Spain, produced by the indefatigable but talentless Sidney W. Pink. It's in black and white and full-frame, but transfer-wise arguably looks superior to the main feature. This segues to yet another extra, in some respects the most interesting of all, The Sweet Sound of Dubbing: Dubbing 'The Sweet Sound of Death'. This is an interview with colorful actor-turned-dubbing director Ben Tatar, who started out in Hollywood films shot in Europe (Gigot, The Longest Day), worked for a while as Ava Gardner's private secretary, and then spent nearly ten years in Spain dubbing cheap genre movies. It's a colorful, interesting featurette, far more interesting than Pink's dull film.

Paul Naschy completists will want this, but for this reviewer the poor transfer of The Hanging Woman really drags this release down. Better elements needed to be sourced, and with the same care and attention given the extra features. Rent It.