Other // Unrated // December 8, 2009
List Price: $29.98 [Buy now and save at Amazon]
Review by Stuart Galbraith IV | posted December 9, 2009 | E-mail the Author
A for-fans-only release if ever there was one, The Jerry Lewis Show Collection is a compilation of sketches from the 1967-69 NBC variety series headlining the iconic postwar comedian-filmmaker, material apparently repackaged sometime in the 1980s or early-'90s for syndication, complete with grating synthesized theme music, poor graphics, and Jerry's idiot laugh, as incessant as The Giant Claw. The original hour show has been whittled down to 22-minutes of highlights, usually a brief opening sketch and two longish ones. Such practices weren't uncommon; older shows with "name" stars were sometimes retooled in this manner (e.g., The Jackie Gleason Show comes to mind), though I'd rather have seen the series in its original broadcast form.

As '60s variety shows go, it's neither totally awful nor a lost classic. The somewhat pleasant surprise is that the show's extended skits allow Jerry to play recurring variations of characters he'd done in movies up that point: Sidney Portnoy is like the fleshed-out Jerry of solo films like The Ladies Man, while Professor Frobisher is Julius Kelp from The Nutty Professor in all but name. He also gets to interact with a curious parade of mostly game guest stars, only a few of which he'd worked with in films. 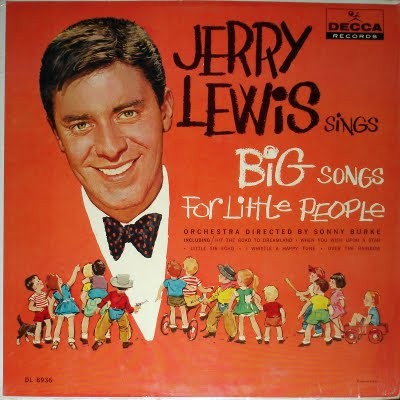 By the early-1960s, Jerry Lewis was indisputably the King of Comedy. Any doubts about his future after splitting with onetime partner Dean Martin were quickly cast aside. His solo films proved popular, so much so that in 1958 Lewis signed a $10 million dollar deal with Paramount for 14 features that made him, arguably, the highest-paid movie star of that era. He was commanding top dollar for his stage appearances, and even had several hit records to his credit. Then in late-1962 Lewis was signed to an overly ambitious 90-minute live talk show/variety series for ABC - 40 shows a year, for which Lewis would receive an astounding $8 million per season, making him the highest-paid television performer as well. Lewis had truly conquered all media.

But while his appearances with Dean Martin on The Colgate Comedy Hour had been a sensational success, as a solo performer television was the one medium where Jerry persistently struck out. That highly anticipated 90-minute series, also called The Jerry Lewis Show* was an infamous though utterly fascinating flop that strained for showbiz-insider spontaneity. The live broadcast, on the technical side, was a Space Age comedy of errors.

A coast-to-coast embarrassment, coupled with changing tastes and Jerry's self-indulgent if innovative directorial style, gradually chipped away at what had been a predominantly adult audience for Jerry's nightclub and television act with Dean, and the family audience the Martin & Lewis and the early solo films had built. By the mid-1960s, the primary audience for Jerry Lewis movies had shifted from all ages to mainly kids, much like Abbott & Costello's demographic shift during the early-1950s. He tried appealing to a more adult audience with Boeing Boeing (1965), Three on a Couch, and Way...Way Out (1966), but these films did little to salvage rapidly diminishing returns.

And so Lewis took another stab at television. Undoubtedly he envied his former partner; The Dean Martin Show was a Top Ten hit, and yet the show's demands didn't prevent Dean from doing two or three movies a year, some of those big hits, too. In fact, Dean generously plugged The Jerry Lewis Show on his own NBC program.

The big problem with this Jerry Lewis Show is its ordinariness. Lewis mugs and pratfalls his way through the kind of generic comedy-variety sketches - loose parodies of popular films (Goldfinger's Harold Sakata does his Oddjob shtick in a spy spoof sketch), broad satires of current fads, all of it utterly ordinary. As with the 90-minute live program for ABC, this Jerry Lewis Show, if not dead on arrival, was clearly marking time from the morning after its premiere episode underwhelmed critics and audiences, and in both cases Jerry's lack of enthusiasm is increasingly evident as the show wears on.

To its credit, at its best The Jerry Lewis Show has little flashes of the huge promise he exhibited in early directorial efforts like The Bellboy or The Ladies Man; for instance, there's a funny vignette with hospital orderly Jerry trying to maneuver a corpse through a hospital, the stiff so stiff he can't fit it into the elevator, etc.

More enjoyable is watching Jerry ad-lib here and there, often causing guest stars like Janet Leigh, Nanette Fabray, or Ben Gazzara to break up on camera. At least they're having fun, and the Leigh material especially hints at the fun Jerry and Janet and Dean and Tony must have had making those elaborate home movies back in the mid-1950s, at the height of everyone's career.

As usual, Jerry surrounded himself with talented writers and even got Nick Castle to supervise the choreography, in what turned out to be his last credit. Lewis's stock company is also good; Henry Corden, Stephen Dunne, Sylvia Lewis (no relation to Jerry). Other guests appearing in these 13 episodes include The Osmond Brothers, Flip Wilson, Don Rickles, Joey Heatherton, Shirley Jones, Audrey Meadows, Lynn Redgrave (she in the premiere, somewhat ironic given her contentious partnership with Lewis on the infamous Broadway flop Hellzapoppin'), Barbara Feldon, Imogene Coca, Richard Kiley, and Laurence Harvey.

Shot in color, on (two-inch?) tape in the studio without an audience, The Jerry Lewis Show looks about as good as other mid-'60s variety shows that have turned up on DVD over the years - in other words, okay, but not great, as is the mono English audio. We received only screener discs with no packaging. What we saw was spread over two single-sided, dual-layered discs but may not be final product. There are no Extra Features outside of a better-than-average photo gallery, with captions.

If you're a hardcore Jerry Lewis fan you'll probably enjoy much of The Jerry Lewis Show, but non-fans need not be curious. Rent It.

* A Larry King-style talk show, again called The Jerry Lewis Show, briefly ran in the summer of 1984. It was one of the most fascinatingly indulgent shows I've ever seen - you haven't lived until you've seen Lewis interviewing William Shatner. I wish that were out on DVD.