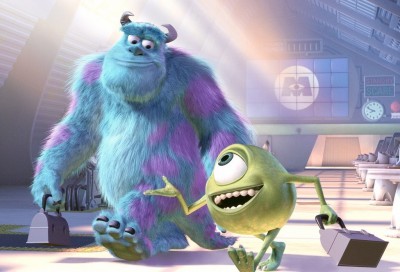 Out of all the Pixar films, "Monsters Inc." has always struck me as the goofball uncle of the group. This picture is funny, gregarious, and makes the viewer feel welcome, but a film of substantial narrative weight? "Monsters" just doesn't reach that special plateau, dramatically or comedically, even though it makes an admirable attempt. It's an amiable picture with a colorful cast of neurotic characters, but the film always stood out more as an agreeable distraction when Pixar needed it the most, not something that represents their finest effort.

Mike (voiced by Billy Crystal) and Sulley (John Goodman) are two BFF creatures employed at the influential Monsters, Inc. This massive corporation, run by Henry J. Waternoose (James Coburn), allows beasts of imagination to pass into the bedrooms of young children to collect their unholy screams, which power the monster city. Sulley is the top "scarer" of the company, though waiting in the wings is the nefarious Randall (Steve Buscemi), a slimy creature insanely jealous of Sulley's corporate success. One late night at work, Sulley accidentally allows a little human girl, nicknamed Boo, to pass through one of the magical bedroom doors separating the monster and human worlds. Fearing expulsion from the company for such an offense, Sulley and Mike scramble to get Boo back into her bedroom, while fighting to stop Randall from carrying out his evil plans for Monsters, Inc.

Though now the company waters have settled some, "Monsters, Inc." is the Pixar film that slipped through the cracks while the company was still searching for its identity. Especially after the emotional tides of "Toy Story 2," "Monsters" stepped forward as something sillier and more pleasingly fluid. It's a friendlier, sweeter Pixar product than initially expected, providing lighter entertainment than the typical Pixar film allows for, though invested in approachable character development to help widen the scope of the shenanigans.

While the film does entertain and occasionally charm, it's bound rather hopelessly to the standard Pixar storyline the studio has nervously outlined for each of its blockbusters. One could set their watch to their brand of screenwriting structure. It's impossible to argue the box office numbers, but something carefree like "Monsters" is restrained by the lunges for poignancy, often stopping the film to play out rusted scenarios of sympathy and villainy, which chip away at the delightful premise. It doesn't kill the merriment, but merely (and painfully) slows it down. The writing is solid enough to work with little, unnecessarily sticking to shabby formula to motor through to the end. With gorgeously realized characters such as Mike and Sulley, it seems unfair to stifle their natural comedic splendor and workday worry to make sure the viewer receives their pre-digested lessons and conflict.

Even if they seem to be lacking a bit storywise, Pixar can still blow away the competition when called upon. "Monsters, Inc." is one of their best looking motion pictures, with the dedicated animation team taking on complicated beasts of a million fine hairs and, in one terrific sequence (where the boys meet the Abominable Snowman), luxurious snowscapes that would make Rankin/Bass rage with jealously. Though still in their honeymoon phase back in 2001, Pixar shows outstanding visual ambition for "Monsters", creating a striking community of oddity and distorted office politics for the characters to run around within.

As the brothers from different monster mothers, Billy Crystal and John Goodman make a wonderful team, sharing chemistry the filmmakers are not shy to exploit. While Crystal is basically doing an amusing variation of his typical one-liner shtick (toned down for the kids, of course), it's Goodman who just might be achieving his best work as the freaked out behemoth. As Sulley, the professional frightener, but loving baby-sitter, Goodman runs through the rainbow of emotions that his live-action roles never allow him to do. Whereas Crystal is the funny bone of the picture, Goodman is the genuine heart, and he fills it with startling depth and personality.

As to be expected from a CG-animated film, the AVC encoded image (1.85:1 aspect ratio) is luscious and superbly detailed. The only noticeable hesitation here is the animation itself, which is understandably a few generations less immaculate than the material encountered today. The BD picks up on the limitations, which isn't distracting, but holds the visual event back from the pop traditionally accompanying a Pixar release. Colors are sublime, with monster gatherings a fiesta of hues and enchanting textures, each character fuller and richer than the last. Shadow detail is excellent, coming in handy for the evening bedroom sequences and a moment of restaurant hysteria.

The DTS-HD 5.1 sound mix presents a healthy workout for the average home theater, with the monster antics serving up hefty comedic tones with slapstick and lighthearted horror. LFE response is pleasant during scare floor sequences, which also retain a nice echo quality, buttressed by ample industrial sound effects. Dialogue is crystal clear and agreeably separated from buoyant scoring selections -- not a syllable is missed. Monstropolis atmospherics are outstanding throughout the presentation, ranging from the kitchen clinks at Harryhausen's to cramped apartment monkey business. There's always a charming circular pull to the track that stimulates the filmmaking and the viewing experience. French and Spanish 5.1 tracks are also available.

A majority of the supplements presented here are ported over from the 2002 DVD release. A glimpse into Pixar's past, most of the visuals here are downright hilarious, revealing the animation giant in full Wonka mode as it tries to cram workplace whimsy down the viewer's throat. We're talking loud shirts, scooter races, chimp cameos, and themed workspaces. The Pixar of today is serious business, but in the year 2001? These guys were acting like a dot com startup.

While there's a profusion of production information here to peruse, the brilliant minds at Pixar forgot to include any "Play All" options. So keep the remote close by, you'll be using it roughly 100,000 times to get all the way through this enormous Blu-ray set. Perhaps all the scooter action made the company forget to offer a smooth BD navigation experience.

Joyful is the feature-length audio commentary from directors Pete Docter and Lee Unkrich, co-writer Andrew Stanton, and producer John Lasseter. The Pixar squad delivers a fairly straightforward chat, discussing the long production schedule of "Monsters, Inc." and its various challenges. Docter and Unkrich have more invested in the film and do a tremendous job explaining their artistic choices and animation miracles, with specific attention placed to the alterations made during the animation process to make the monsters more sympathetic. As with anything Pixar, the tone here is upbeat and eager, making it an easy listen.

"Filmmakers' Round Table" (21:35) heads to the Hidden City Café to catch up with Pete Docter, Lee Unkrich, producer Darla K. Anderson, and story supervisor Bob Peterson (who also voices irritable Monsters. Inc. clerk Roz). It's been a few years since the "Monsters" experience, and there's a sense of satisfaction in the room as the participants recall a few war stories from the production years. Also of interest is a discussion of the 9/11 terrorist attacks, which occurred two months before the release of the film, bringing a great sense of panic to Pixar shores, necessitating a slight modification of one explosive gag.

"'Monsters, Inc.' Ride and Go Seek: Building Monstropolis in Japan" (7:58) heads to Tokyo Disneyland to check out the new 2009 dark ride based on the Pixar film. While American shores are handed more diluted "Monsters, Inc." theme park encounters, the Japanese have constructed an inventive, engaging ride, revealed here in this amusing BTS featurette. The Japanese sure know how to celebrate Disney.

"For the Birds" (3:28) is a Pixar short, shown theatrically with "Monsters, Inc." It can be viewed with or without commentary by Ralph Eggleston.

"Mike's New Car" (3:47) furthers the adventure of Mike and Sulley in animated short form. It can be viewed with or without commentary from "The Filmmakers' Kids." It's literally a team of toddlers commenting on the action.

"Roz's 100 Door Challenge" is an extended trivia game. If you've ever wanted to know your true place in the Monsters, Inc. corporate family, this entertaining (and somewhat difficult) quiz will provide the answer.

"Pixar Fun Factory Tour" (3:36) takes the viewer into the heart of the company's (then) new digs. Horseplay and aggressive camera presence ensues.

"Story is King" (2:03), "Monsters Are Real" (1:31), "Original Treatment" (13:43), and "Story Pitch: Back to Work" (4:39) delve into Pixar's famous attention to detail, highlighting how the "Monsters" tale was developed from a few rough ideas to the finished film. As with everything on this BD, lively interviews with crew members keep the energy up, underlining the company's exhaustive approach to storytelling.

"Storyboard to Film Comparison" (5:42) takes a moment from the film and breaks down the animation process for proper investigation.

"Set Dressing Intro" (3:22) meets up with Sophie Vincelette, who walks us through the interiors of the monster city.

"Location Flyarounds" (7:25) is my personal favorite supplement of the BD. Essentially a set tour, the camera visits the "Monster" locations, only everyone has cleared out, allowing an amusing opportunity to scrutinize the animation work after "shooting" was completed. A few surprises help keep things interesting.

"Cast of Characters" (5:54) interviews the cast for their "Monster" thoughts, giving the camera the proper amount of EPK promotional gusto required to sell a movie.

"What Makes a Great Monster" (1:27) spotlights Pixar animator brainstorms, and how they were shaped for the final product. It appears inventing monsters is no easy task.

"Animation" (28:35) is a massive collection of 10 featurettes, all breaking down the CG-creation process bit by bit. For genre nuts, this should be the first stop on the BD.

"Monster Song" (3:17) bestows some praise on composer Randy Newman, who masterminded the leisurely song, "If I Didn't Have You," performed by Goodman and Crystal.

"Sound Design" (4:16) goes into the sonic architecture of the picture, providing an interview with Gary Rydstrom to help clarify matters.

"Premiere" (:58) returns us all to the year 2001, where stars such as Kirstie Alley and Lorraine Bracco showed up on Hollywood Boulevard to welcome the new Pixar picture.

"Toys" (1:32) has Lasseter and the boys playing with merchandise (with the aforementioned chimp), explaining the company's efforts at toy shelf quality control. "Outtakes and Company Play" (5:32) submit the animated mix-em-ups, a gimmick that helped Pixar add a few bucks to the box office back in the day.

"Ponkickies 21" is a clip from a Japanese kiddie show, where Mike and Sulley made surprise cameos to help the oddity along.

"If I Didn't Have You" (1:12) brings Newman's work back for a second round, this time in music video form.

"On the Job with Mike and Sulley" (2:33) interviews the monster stars about their day jobs and life inside Monstropolis.

"Welcome to Monsters, Inc." (:56), "Your First Day" (3:37) and "A History of Monster Land" (1:36) flesh out the backstory considerably, lampooning corporate training videos to humorously detail life on the job.

And finally, two Theatrical Trailers and four Commercials are included.

If there's any single element to "Monsters, Inc." that's absolute perfection, it's the final shot of Sulley and Boo. Cinematic history has bestowed loyal patrons with plenty of spectacular final shots, typically requiring swell and shock to send the audience off on a searing note of triumph or tragedy. "Monsters" ends on a mesmerizing, low-tech note of unbreakable bond. It's such a direct hit of tenderness, it's almost too much to bear. By exiting on a heart-stoppingly graceful note, it's easy for forgive the sin of structural replication that plagues the picture. The effort to conclude on an irresistible feeling of possibility and warmth is entirely appreciated, lending "Monsters, Inc." the sucker punch it needs to linger long after it ends.