Walt Disney Studios Home Entertainment // G // February 9, 2010
List Price: $19.99 [Buy now and save at Amazon]
Review by Danny Cox | posted February 7, 2010 | E-mail the Author
The Movie:
Mickey Mouse and his pals have been loved by all of us for decades now and just because they are more technologically advanced doesn't mean any of that has to change. As a child, I watched the hand-drawn cartoons that started out with a screen-sized face of whichever character was the main focus in the following story. From that moment on there would be adventure, comedy, shenanigans, drama, romance, and even some action from the Disney pals. Things would get even more interesting when different characters would crossover and show up together in cartoons. Nothing said fun and exciting like Donald Duck showing up with Goofy and Mickey, but those days of the crossover are gone.
Don't think that there aren't crossovers anymore, but there really isn't any need for them. It's rather to hard to ever watch a single episode of Mickey Mouse Clubhouse without seeing at least five different Disney characters involved somehow. Oh sure, all the run-of-the-mill names like Mickey, Minnie, Donald, Daisy, Pluto, Goofy, and even Pete are commonplace now, but there are even more joining in on the fun from time to time. I'm not going to spoil any of the cameos for you but just believe me that they can be very small in stature to absolute "giant" in size.
This particular release has all the characters we love but the main focus is on the one, the only Minnie Mouse. Mickey's main squeeze has just opened up a brand new store with some of the greatest bows the world has ever seen. Guys aren't being left out though because when Minnie wants to sell bows, she's going to sell bows and that includes "bow" ties. Minnie's store is doing fantastic business with so many people, but there are a few problems she has come across in keeping her business running smooth and also helping out guys like Pete who have never really had to pick out a bow before.
There is a lot of fun to be had here in the four episodes included, but don't forget the educational and interactive aspects that have made Mickey Mouse Clubhouse so famous with parents. Kids will have the chance to answer questions, point out items, and even give their own opinions which can be taken into account by Mickey and the gang. Children of any age can enjoy this series because it does a great job of letting the younger ones know exactly what they are supposed to do while not making it overly childish for those six and over. Hey, I even enjoyed these episodes myself and am analyzing them on the enjoyment I got from them instead of looking at them from the mindset of a child which was my original intention.
Episodes
~ Minnie's Bow-tique: The episode which is the focus of the entire DVD tells the opening tale of Minnie Mouse opening up her bow and bow tie store. Children will have the great pleasure of helping her get things in order for the grand opening and making sure the store's big day goes off without a hitch. Problems arise though when Pete shows up to buy his Aunt Mabel a pretty present, but he has no experience in picking out bows and needs a lot of help. Pete's also a bit on the shy side when it comes to shopping for something so girlie.
~ Minnie's Picnic: A picnic is a lot of work and that especially holds true for the picnic that Minnie wants to throw for twelve people. No problem though because we're all invited as long as we can help with the gathering of all we'll need, packing up the car, and setting up for the fun-filled day. Even though this is the simplest of the four episodes included on the disc, it is by far my favorite. For some reason it is just a lot of fun and kids are going to eat it up.
~ Minnie's Bee Story: Here is where kids will be introduced to the character of Buzz Buzz for the first time. Only it certainly wasn't the first time for old school Disney fans such as myself because Buzz Buzz is far too familiar from the Disney cartoons of the eighties that I watched as a kid. The poor little guy has become the victim of a strong wind that blew him away from his flower so he enlists the help of Minnie and her friends. Soon though they lose sight of him and need help tracking him down by his distinct sound. Another fun little episode.
~ Minnie's Pajama Party: Minnie has invited everyone over for a really fun sleepover in this "never-before-seen" episode. There is nothing but fun and games all night for the gang even though they need a little help here and there to make sure things go smoothly. Kids will be able to help determine how everyone gets a piece of pie and also how to keep the party calm after Goofy tells a scary ghost story. That surely isn't all though as a really big guest shows up forcing a few changes to be made for Minnie's pajama party to be a success.
The DVD

Video:
Presented in 1.78:1 Anamorphic Widescreen format, this series is absolutely beautiful without a single problem to be found anywhere. Gone are the days of cigarette burns and unconnected lines in the hand-drawn animation because the digitally created cartoons are picture perfect from start to finish. Errors there are none. 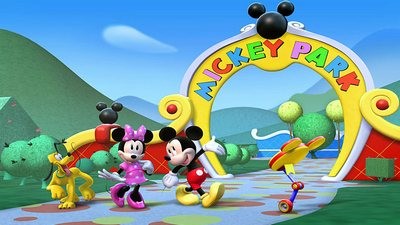