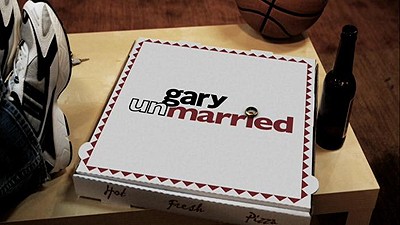 
The Show
In these cynical times, there's a lot of gallows humor to go around, but is it possible to wrench comedy out of a wholly depressing topic? Based on shows like M.A.S.H. (war) and The Office (dead-end employment,) one would say, absolutely, but what about a topic like divorce, which has no positive value at all, other than the ending of a bad marriage, which is far outweighed by the damage it does. And what if that divorce is fresh and bitter? It doesn't seem to be an area rife for laughter, but that's where Gary Unmarried is born, as Gary (Jay Mohr) has just gotten divorced from Allison (Paula Marshall), and they've begun the physical separation, with Gary is a temporary home, having lost most of his stuff, and splitting custody of his two kids. And hilarity ensues?

Well, sort of. The show goes with Gary as he tries to dive right back into the dating pool, or at least the frequent casual sex pool, but quickly finds himself back in a relationship, this time with single-mom Vanessa (Jaime King), while trying to cut the cord with his ex, and attack her on the field of battle that is their children's emotions. The break-up hasn't been the cleanest, thanks to an awkward reliance they share, and the practically-criminal nature of Allison's rebound relationship with Dr. Krandall (Ed Begley), who acted as Gary and Allison's marriage counselor. Naturally, this doesn't sit well with Gary, nor does the announcement that she'll be marrying him. The result is an extremely dark, bitter attempt to set boundaries on their separate lives, after 15 years together, with the kids stuck in the middle of it all. 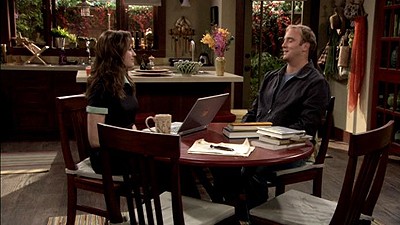 Mohr is his usually funny, regular-guy self, playing a low-key house painter who's lost almost everything in the divorce, a guy who's not too bright, and attempting to be happy again. What makes no sense though, and I speak from the point of view of someone with no knowledge of the effects of divorce, is the relationship with his ex-wife. By all accounts, she's a complete shrew who's ridiculously mean, yet they spend an inordinate amount of time together. It's hard to see why they would have every been together in the first place, until you get hints that she was a wild child at one point. But it must have been a long time ago, as she's every married man's worst nightmare now, emasculating Gary at every turn. It seems to even be a family trait, as her father (Martin Mull) is equally put-upon by his own nagging harpy of a spouse (Jane Curtin.) Based on what we see, Gary would seem to want to get far, far away, instead of continuously being drawn into her world of drama.

The supporting cast helps makes things a bit lighter, including Gary's employee and pal Dennis (played by Al Madrigal, who like Patton Oswalt on King of Queens, is much funnier than a sitcom can show), his drug-addled dad Jack (Max Gail) and the kids, Louise (Laura Marano in the pilot, but Kathryn Newton for the rest of the series) and Tom (the very amusing Ryan Malgarini.) But aside from Madrigal (who should have an expanded presence) Begley is the show's biggest asset, even if he, like several of the characters early on, disappears from the show. Playing a disconnected intellectual in a relationship with a woman clearly inferior to him in that realm, while dealing with Gary in his counselor role, makes for some awkwardly funny moments, especially when he's introduced to Allison's parents.

The plots are straight out of the sitcom vaults, including hoary classics, like Gary scheduling two dates for the same time, or uncomfortable holiday get-togethers or Gary dating not only his daughter's teacher, but his best friend's sister. Mohr's a fine actor for the role, getting some laughs he probably shouldn't be afforded due to the material, but in the hands of a veteran sitcom director like James Burrows, it hums like a finely-tuned car. That said, in the end, it's still a show about a man whose life and home have been ripped from him, for no fully-apparent reason, and the woman who "won," keeps returning to gloat about it. To me, that's sad, not funny, no matter how many jokes about masturbation you include in it. 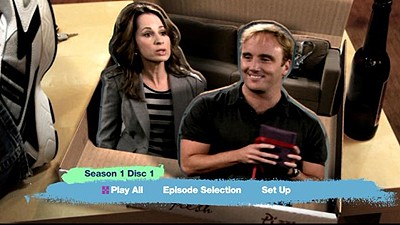 The DVD
A three-disc release, packed in a standard keepcase with a two-sided tray and a two-sided cover, this set's DVDs feature mildly-animated anamorphic widescreen menus, with options to watch all the episodes, select scenes, adjust languages and check out the extras (on the third disc.) There are no audio options, though subtitles are available in English SDH, Spanish and French.

The Quality
The anamorphic-widescreen transfers are solid overall, with nice, bright colors and crisp, clean details. There are no obvious issues to be seen in the visuals, including no dirt or damage, and no compression artifacts. If you watch the show on HD, this is about as close as SD is going to come to hitting the mark.

The Dolby Digital 5.1 tracks do a fine job of getting the show's dialogue across clear and clean, but don't expect anything too impressive about the mix. It's your usual sitcom audio, and as such, keeps the voices dead-center.

The Extras
There's a decent selection of extras in this set, held entirely on the third disc. Up first is the 15-minute "Chemistry of Comedy," a look behind the scenes of the show, shot during the the production of the episode "Gary's Ex-Brother-In-Law." Through plenty of on-set footage and interviews with the cast, you get a good idea about how an episode is made, as well as the relationships amongst the cast. It's followed by a closer look at Begley and his well-known eco-friendliness, in the 5:39 "Planet Begley." After some ribbing by Mohr and others in the cast, Begley gives you a tour of his energy-efficient home. He's an easy mark to make fun of, but you have to give him credit for living by his principals, even if he professes it's just because he's cheap.

There's more Mohr and more behind-the-scenes info in "Tuesday on the Set with Jay." At just over five minutes in length, it's a funny, entertaining tour of the production studio. It's certainly nothing serious or intentional informative. The same goes for the the two-minute gag reel, which is more cute than hilarious. 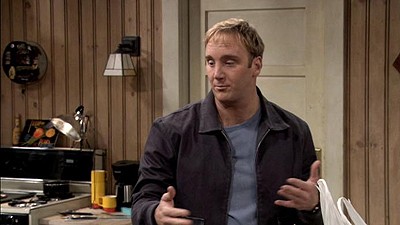 The Bottom Line
I've never understood the popularity of Two and Half Men, but if that show is a hit, there's no reason for this series to not achieve similar success, as it feels aimed directly at the low-brow middle ground, with a sense of humor powered by the "stupid dad" and "crudely sexual" genes of sitcom DNA. There are moments for those who prefer NBC's Thursday night line-up over CBS's Monday, but it's definitely of a traditional comedic bent. The discs look and sound just fine, and the extras should satisfy those who dig on Mohr and company, but it just didn't grab me the way a Community has.