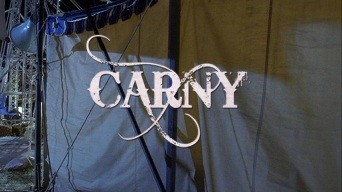 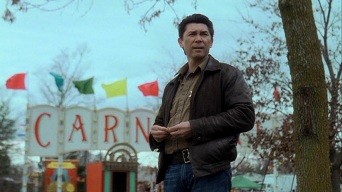 Last month, I was sent the previous installment of the Maneater Series to review: Hellhounds. It appeared at the time that the website had not been updated for several months (and it still hasn't been as I write this). Some changes appeared to be afoot on the business level as Vivendi Entertainment's logo - and not Genius Entertainment - was now featured on the cover art. The same holds true for this month's Maneater release: Carny. If there are any Maneater Series fans out there, it's difficult to say what the future of this long-running home video series will be, though I can say that there's at least one more release in the pipeline for April 2010 titled High Plains Invaders.

In any case, let's step right up and talk about Carny, a SyFy Channel riff on the Jersey Devil legend, an urban legend that The X-Files had taken on long ago. Here, the fabled winged creature gets the expected weak CG-treatment, and as-advertised genre veteran Lou Diamond Phillips is the actor given the charge of putting down the monster. There's been about 20 films in the Maneater Series, and seemingly hundreds of others of its kind produced for SyFy - and Carny stays very safe and predictable for its genre. You get quick-movin' shots of the poorly animated creature flapping around on its wings, a clockwork body count, and a final showdown between protagonist and creature.

To be honest, the opening minutes of Carny had me thinking it might be better than the norm. From the start, the film felt like one of those old 80s-style horror productions on television, sort of like Friday the 13th: The Series or HBO's Tales from the Crypt. The villain Cap (played very well by Alan C. Peterson) is one of those over-the-top comic book evildoers you'd expect from one of those series. He's secured the Jersey Devil for a faceless client - all he has to do is deliver the beast and he collects a lot of money. However, Cap is in charge of a travelling carnival, pitching tent in a small town. For reasons unclear, Cap decides he's going to show off the creature to the handful of local citizens who have come for the evening to the carnival. Of course, the Jersey Devil breaks loose - and the typical mayhem ensues.

While Carny is set in contemporary times, everything about the town feels old-fashioned, including its earnest sheriff, played by the aforementioned (and always reliable) Phillips. This role feels like a carbon-copy, by the way, of his role in Bats a number of years back. Populating Sheriff Atlas's town are a bunch of flat stereotypes: the trusty deputy, the overzealous pastor, his rowdy son, and a fair amount of townsfolk willing to form mobs to burn down the carnival (I'm not kidding on this, it's like watching a Universal horror film from the 1940s in this respect).

Between the '80s vibe and the retro characters, I thought this might end up a fun little exercise in schlock. Unfortunately, Carny abandons its characters and setting for a lot of monotonous stalking in the woods. Yes, we get Atlas, Cap, and others walking gingerly around in the forest, bearing rifles and hunting for the Jersey Devil. Yawn. By the time the action heads back to the carnival (which is where the movie should have stayed), it's too late. Add an unnecessarily downbeat ending, and you've got another time-waster offering little that's memorable.

If you're a fan of the Maneater Series, I'd suggest that this is worth a rental. All others can safely skip it.

Oh, and just a word of friendly warning: Lou Diamond Phillips writes and performs the end credits music. Now that song was scary. 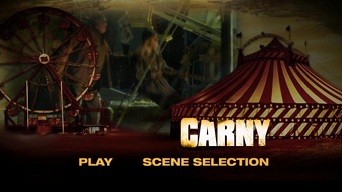 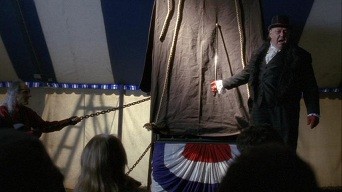 Vivendi Entertainment gives Carny an anamorphic widescreen presentation that it claims "preserve[s] the aspect ratio of its original television exhibition." As is fairly standard for the Maneater Series, the image is serviceable if underwhelming, with good colors and fair details.

The lone audio track is an English language Dolby Digital 5.1 affair. Again, the track is serviceable, with dialogue always clear. However, the mix isn't particularly dynamic. Neither optional subtitle nor language tracks are available.

Trailers precede the main menu for Sand Serpents, Sea Beast, and Phantom Racer. And that's it for extras.

Carny starts off as a promising schlocky take on the Jersey Devil legend. Unfortunately, despite good performances from Lou Diamond Phillips and A.C. Peterson, the movie sticks to the Maneater Series formula and ends up being another standard runaround with a weakly-animated CG menace. Rent it, but only if you're into this sort of thing.