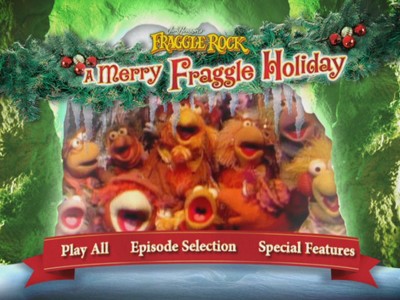 Fraggle Rock was a Jim Henson-produced television show that ran from 1983 to 1987. The creative kid's program was about the Fraggles, silly creatures who lived underground and had their own society, complete with a community structure very much like our own, as well as myths, legends, and rituals that were unique to the Fraggle kingdom. Their enemies were the Gorgs, giant gadabouts that weren't above eating a Fraggle or two, and the opposite of a carefree, fun-loving Fraggle is a Doozer, a tiny worker dedicated to building and industry. Beyond the Fraggle caverns is "outer space," or what you and I would know as the regular human world.

I haven't seen Fraggle Rock in years, but given some of the more recent releases of the series as boxed sets, I was curious how it held up. I am a big fan of the Muppets to this day, and I have a real fondness for Jim Henson's puppetry. So, when Lionsgate released Fraggle Rock: A Merry Fraggle Holiday, it seemed like a low-commitment way to see if this piece of my childhood was still worthwhile. If it was, then fantastic, I could go deeper should the opportunity arise; if not, no big deal, I only had to invest 74 minutes into being disappointed.

Glad to say, Fraggle Rock is still a lot of fun. In fact, I appreciate much more now how smartly the show was set up. A Merry Fraggle Holiday brings together three separate episodes of the series, and all three follow a specific, effective structure. Each show had three separate layers: the main story with the Fraggles, and two complementary stories that reinforced the themes of that week's script. First was the framing device of Doc (Gerard Parks) and his dog Sprocket. Unbeknownst to the kindly old inventor, a tunnel out of Fraggle Rock lead into his house, and the things he went through in his weekly endeavors reflected in some way on what the Fraggles were doing. Likewise, the third story came as interludes where the main Fraggle, Gobo (voiced by Jerry Nelson), read postcards from his uncle Traveling Matt (Dave Goelz), an explorer whose expeditions in the human world somehow connected to whatever Gobo was going through in the same manner Doc's situation did.

It's a very clever way to create interesting stories that will entertain children and teach them a thing or two about how the world works without them knowing they are receiving a moral or a lesson. That's the upside. The very minor downside is that, as a holiday DVD, A Merry Fraggle Holiday is a bit of an odd bag. Of the three episodes included here, only one, "The Bells of Fraggle Rock," has any direct relation to Christmas. In that story, Gobo begins to doubt the meaning behind the Festival of Bells, a yearly ritual where the Fraggles stave off winter by coming together as one unit and ringing bells, a kind of party/ceremony. Gobo goes searching for the origins of the tale, only to eventually find that the meaning of the Festival was back home where it--and he--belonged.

The other two shows, "The Grapes of Generosity" and "The Perfect Blue Rollie," caution children against selfishness. In one, Gobo doesn't share grapes that have consequences for someone who hordes them, and in the other, the hippy burnout Fraggle named Boober (Goelz again) tries to keep the rarest marble ever all for himself. Giving is, of course, an important trait to have during the holiday season, so the inclusion of these particular shows does make sense. It's just if you're expecting an all-Christmas DVD, know that the whole holiday theme merrily disappears after the initial go. Plus, all of these episodes are on the complete season collections so collectors need not worry about buying them again. (Read John Sinnot's review of The Complete Series here.

That said, Fraggle Rock: A Merry Fraggle Holiday is still a very worthwhile sampling of classic children's programming. I know I'm going to be passing my copy on to a younger person in my life, and if you have any kids in yours that may appreciate Fraggle Rock the way you once did, you might want to consider this as a stocking stuffer yourself. 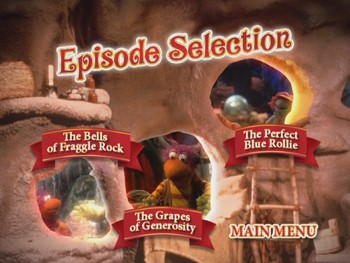 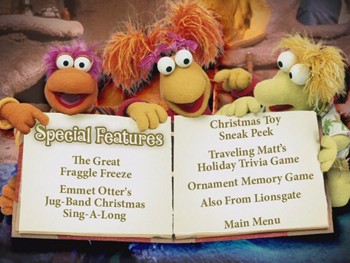 Video:
The full-frame presentation of Fraggle Rock: A Merry Fraggle Holiday preserves the original aspect ratio of the television broadcast. The image quality is strong, with no dirt or real digital problems outside of some light combing. The colors are good, if maybe a bit hot; the blacks are a little weak.

Sound:
Mixed in Dolby 2.0, the shows sound good. Nothing special, it's a pretty straight-ahead audio track, mastered from quality sources.

Subtitles for the deaf and hearing impaired are available for those who require them.

Extras:
There are several extras on the disc, some of which are Christmas-themed, some of which are not, and some of which stretch the parameters of what constitutes a bonus. A short sing-along from Emmet Otter's Jug-Band Christmas is just a thinly disguised commercial for that DVD, for instance, while the even shorter "Look at Jim Henson's The Christmas Toy" doesn't even try to hide the fact that they are trying to sell you that 1980s special. (Then, of course, there are the straight-up Lionsgate trailers.)

Fraggle Rock became a rather tepid animated series in 1987, and a somewhat winter-based episode, "The Great Fraggle Freeze," is also included here. Older folks watching Fraggle Rock: A Merry Fraggle Holiday out of nostalgia can skip this hunk of junk. It nobly tries to borrow the structure from the puppet series, but ignobly fails to match the quality of the original.

FINAL THOUGHTS:
Recommended. Fraggle Rock: A Merry Fraggle Holiday is a nice slice of the very good Jim Henson series, a welcome reminder of how cleverly the show was put together. The three episodes here, though not overly connected to the holiday theme, will fit in nicely with other meaningful programming for this time of year and are a treat unto themselves. Older fans may want to look into the big series sets instead, but this wouldn't be a bad gift for newbies of a younger age. 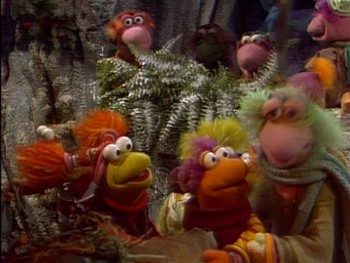 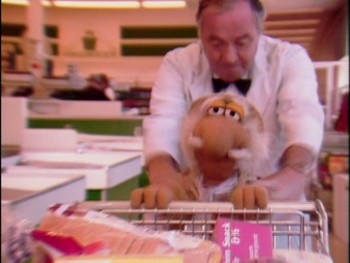