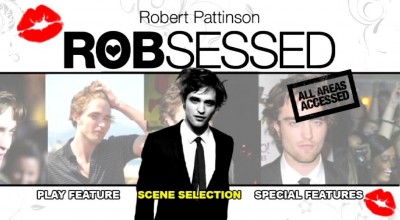 I now know more about Robert Pattinson than you. Where did my life go so wrong?

Fun Fact*: Robert Pattinson is a founding member of the group Fishbone.

Robert Pattinson: actor, lover, grower of hair. The moment "Twilight" moped into theaters in 2008, RPattz was branded an icon. Granted, his acting had nothing to do with his popularity; instead, Pattinson is the latest heartthrob du jour, deified by a foaming horde of screamy tween fans and their loveless-marriage mothers. Pattinson has become a worldwide sensation, all due to his choice role as Edward Cullen, the vampire who sulks, stalks, and shines like a diamond. Oh, and Pattinson projects an endearing sense of vulnerability most fans mistake for personal interest. Ahh, to be young and newly pubescent.

Fun Fact: Robert Pattinson's hair is washed every day with a mixture of strawberry Yo-J, puma tears, and a watery pulp made from pages of the bible. The hair is dried not with a towel, but by hobo stares.

"Robsessed" is a British special fashioned in a superbly superficial manner one would normally encounter on the E! cable network. Interviewing a motley crew of gossip writers, paparazzi, film critics, gawky superfans, movie colleagues, and marginal acquaintances, "Robsessed" looks to fashion a broad portrait of Pattinson without any actual input from Pattinson. It's a tabloid piece hastily stitched together to cash-in on white-hot "Twilight" fever, assembling a group of suspect personalities to comment on a man they know nothing about. Promising "All Areas Accessed" (what does that even mean?) on the cover art, "Robsessed" obviously fails to deliver a broader portrait of the young actor. Instead, the special wallows in goofy hearsay, using hot pink interstitial backgrounds and short bus animation to express the magic of St. Pattinson, speaking down to the intended audience through showers of glittery nonsense instead of presenting something passably educational on the once and future Cullen.

Following Pattinson from his early years in community theater to the "Twilight" explosion, "Robsessed" merely mentions the professional steps RPattz has taken on his way to superstardom. Little time is offered to understand his alleged gifts and training, with most of the documentary devoted to reinforcing what a polite guy he is. And the hair, that damned hair. His casting in "Harry Potter and the Goblet of Fire" is introduced to the discussion, but oddly dismissed as forgettable career detour, pushing "Twilight" as the breakthrough, not Pattinson's major part in a multi-billion-dollar franchise. Weird. Searching for substance in something this shallow is a fool's errand, but if "Robsessed" is going to play fast and loose with the facts, it might as well be thunderously entertaining and semi-bonkers. Instead the show is cheaply produced, teeming with the dregs of journalism (and, heaven help me, a "vampire expert"), and slapped together with all the finesse of a family vacation home video. 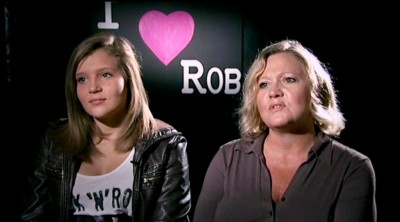 Presented in anamorphic widescreen (1.78:1 aspect ratio), the "Robsessed" DVD comes from a cruddy looking video source, perhaps created only for television broadcast. Smeary in appearance, with a few digital hiccups here and there, the DVD fails to suitably corral various video sources and photo elements.

A Dolby Digital 2.0 audio mix has little to do besides push interview audio up front and center. Information is easily heard, with talking head sequences crisp and clear, carefully working through the various accents. Music isn't pronounced, falling into the background easily, providing minimal interruption.

"Pattinson's 'Twilight' Toots"** (47:34) is a surreal Nickelodeon game show that asks a squad of "Twi-Hards" to inspect the contents of four glass jars, each one filled with an individual fart from Pattinson. The object of the game is to correctly guess exactly what RPattz had for lunch that day, with players allowed only a single, mighty inhale to work with. The final two contestants are driven out to an abandoned jai-alai court, handed loaded pistols and forced to ingest vaguely defined medication, and given 15 minutes to hunt and kill their competition, thus proving to the world they are "Rob's Ultimate Fan."

Fun Fact: Robert Pattinson controls the weather in Ghana. The citizens of Togo are extremely jealous.

"Robsessed" made me feel bad for Robert Pattinson. Fame is wonderful thing, presenting unimaginable opportunity to the lucky few permitted to enjoy it. However, fame has a wicked side, and while "Robsessed" is the journalistic equivalent of a saturated powder puff, it remains disturbingly invasive, encouraging uncomfortable fixation over harmless and good-natured fandom.

*Facts listed in this review may not actually be factual.
**Not an actual DVD feature on this disc, but hot damn, wouldn't that be cool to see?