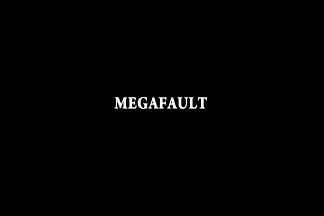 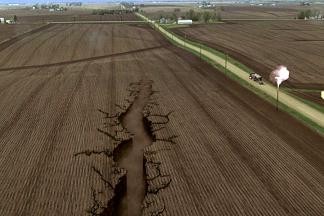 I've been with DVD Talk for two years now, and I wonder how many times I've had to think of an original way to begin a review for a SyFy Channel original movie repurposed to home video that I've been sent to consider. These low-budget movies of questionable quality have energetically flourished for years on the channel's notorious weekend movie-a-thons before getting dumped onto disc by one of several video distributors.

Megafault, just released by The Asylum Home Entertainment on DVD, is another in the long, long line of these films. The hallmarks are all here. First, get an actor whose career is fading to headline. Here, we get Brittany Murphy (8 Mile) - and she's joined by Eriq La Salle (of the recently-canceled ER series) and Bruce Davison (the original Willard) to boot. Second, have said actor (or actress in this case) battle a cheesy CG-menace, preferably the title of the movie. And yes, Megafault offers a megafault: a flimsy CG earthquake that leaves lots of fake-looking destruction in its wake. Add a standard screenplay built upon clichéd dialogue and a too-familiar plot with just a dash of overly-dramatic synth score, and you've got yourself a forgettable SyFy Channel Saturday night movie.

All of this leads me to this point - and it's a point I'm surprised I'm making - Megafault actually works. Yes, it's melodramatic and downright bad, but as far as cheesy natural disaster fare goes, one certainly can do far worse.

I think the key to Megafault's limited success is its lack of pretension. The film opens with Boomer (LaSalle), a demolitions expert who sets off a series of explosions at a mine in Kentucky. Within a minute or two of the film's runtime, the titular megafault is accidentally initiated by Boomer's work and the destruction begins - and it rarely lets up for the remaining 88 minutes. The movie knows what it is, in other words, and it delivers on its low expectations.

Murphy is the spunky seismologist who - rather conveniently - begins a speech on earthquakes at a formal dinner when the megafault strikes. Springing into action with her mentor (Davison), she travels to Kentucky to - again conveniently - come across Boomer who joins her in a valiant effort to stop the fake-looking megafault as it rips through the continental United States, with the US military joining in a little later on. Oh yes, and Murphy has a good-looking doting husband (Justin Hartley of the Smallville series) and a daughter who outrun the megafault in a gas tanker in a decidedly superfluous sub-plot.

The action comes fast and furious - and just about all of it looks bad. Falling buildings, fireball explosions, and fleeing civilians, none of it looks convincing. And while I'm no expert, I think it's safe to say that the science underlying the concept is suspect as well. But, it's all in good fun, even if that fun arrives in the form of Mystery Science Theater 3000-style riffing (Megafault is perfect for this type of audience participation). The cast is perfunctory at best, with Murphy completely unconvincing as the seismologist and LaSalle humorously over-earnest as the guilt-ridden Boomer.

The DVD's cover art states that it's a "Special Director's Cut." However, at roughly 90 minutes, I can't imagine there's much here that wasn't in the original television exhibition. Still, if you're in the mood for something totally cheesy, Megafault delivers. I'd recommend it on that premise alone - so don't fault me if you expect anything more. 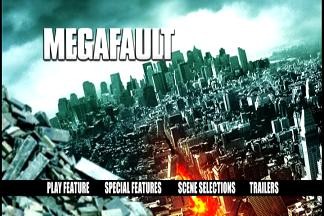 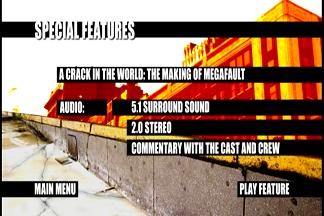 The Asylum Home Entertainment gives Megafault an anamorphic widescreen presentation that likely reflects its original television exhibition. The image was fine, but clarity could have been better and there were some artifacts throughout.

Two English language audio tracks are available: Dolby Digital 5.1 Surround and Dolby Digital 2.0 Stereo. I opted for the latter when I watched the film, and the track was strong and effective, with dialogue always clear amidst the booming explosions and overbearing synth score.

Trailers precede the main menu for 2012: Supernova, Princess of Mars, Haunting of Winchester House, Sex Pot, and The Land that Time Forgot. These are made available in a Trailers sub-menu along with an additional trailer for Megafault itself.

Movie-specific extras include a feature-length commentary track with director David Michael Latt, producer David Rimawi, writer Paul Bales, and actor Paul Logan. A random sampling suggests it is lively and informative. Also available is A Crack in the World: The Making of Megafault (17:44), a fairly typical behind-the-scenes featurette presented in full screen format.

Despite its many faults, Megafault is one of the best SyFy Channel movies involving an overblown natural disaster repurposed to home video that I've seen - which, to be honest, is faint praise at best, but . . . meh . . . I'll give it a mild recommendation to those looking for some harmless fun sci-fi cheese.