EuroArts // Unrated // October 27, 2009 // Region 0
List Price: $39.99 [Buy now and save at Amazon]
Review by Stuart Galbraith IV | posted December 13, 2009 | E-mail the Author
A well-intentioned but not very good documentary about Venezuela's ambitious classical music programs for the nation's poor, El Sistema (2009) plays like an upbeat, impassioned pledge drive. Its founders and administrators are all saintly and selfless, the students are adorable and talented, the teachers hard-working and inspiring - but there's no story, no one to latch onto. It's a movie about large crowds instead of individuals.

Though presented in 1080i, El Sistema ("The System") looks great, with the densely-packed urban Venezuelan landscape contrasted with seas of children's smiling faces playing their various instruments in concert halls, where the 5.1 DTS-HD audio of the performances undeniably blasts impressively. 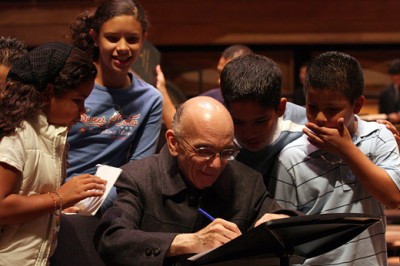 The Fundación del Estado para el Sistema Nacional de las Orquestas Juveniles e Infantiles de Venezuela ("National Network of Youth and Children's Orchestras of Venezuela," or Fesnojiv), known domestically as El Sistema, was founded in 1975 by an amateur musician and professional economist named José Antonio Abreu, a hunched-over little man resembling a benign version of Mr. Burns, Homer's Scrooge-like boss on The Simpsons. Though a few critics have accused the program and the movie of being nothing more than Hugo Chávez-generated socialist propaganda, in fact El Sistema thrived under conservative state control long before Chávez's administration, thanks largely to Abreu's persuasive tenacity.

As the film details, 80-90 percent of the 265,000 children and young people in the program's schools are from poor families, many living in crime-infested, gangster-controlled neighborhoods where drive-by shootings are an everyday occurrence. One girl talks about having to miss class after being shot in the leg, and that missing class hurt her more than the pain of her gunshot wound.

The program is expanding rapidly, so says the film, with hopes to offer free music programs to around a million children within ten years. Though well-funded, considering, so quickly is El Sistema expanding that some children have to spend their first months in a "paper orchestra," using instruments made of papier-mâché, where indefatigable teachers insist students can use that time learning the basic disciplines of playing in an orchestra.

Toward the end, the film introduces its audience to special programs for children with physical and mental disabilities, including autism. There's a special "White Hand Choir" of deaf children and teenagers who perform their special music movingly, and who are themselves clearly overcome with this newfound method of self-expression.

Predictably founder Abreu, the selfless teachers, and the impressively adult, articulate children discuss how for them music becomes a barrier against the tide of crime and poverty-driven hopelessness that threatens to consume their lives and how music - regardless of whether they persue a professional career or not - provides a kind of salvation.

Directors Paul Smaczny and Maria Stodtmeier, with classical music documentary backgrounds rather than in social issues, aim for a kind of grand musical sweep rather than intimacy. And there lies El Sistema's problem: it's 100 wearying minutes of poor-but-hopeful children rushing off to school in swooping crane shots, older kids giving virtuoso performances to cheering crowds, and enough Good Will for 10 inspiring documentaries.

In the process, we never get to know any of the children or their teachers very well. An always-smiling Abreu is interviewed, but one never gets any real sense of who he is, and his answers are all in the generaic music = life vein. What sacrifices did he have to make? What drives him? The colorful but superficial film provides no answers.

As stated above, the filmed in high-definition video is above average, the videography painting a vivid, contrasting portrait of Venezuela's slums and concert halls. The 5.1 DTS-HD offers especially strong audio during the concert sections, which delightfully mix classical pieces with local indigenous music, including a couple of outstanding mambo pieces. A PCM 2.0 mix is also offered, while the Spanish-language production is supported by optional subtitles in English, German, French, Spanish, and Japanese. The disc is all-region.

Included is a nine-minute bonus film, Audition for the National Children's Orchestra of Venezuela. There's also a 16-page booklet about the organization with a detailed program and essays translated into English, German, French, and Spanish.

This is a colorful documentary with lots of fun music and enthusiastic performances, but as a social documentary about a national music program, its personalities, and its impact on the children it helps I found it rather lacking. Rent It.