I remember when the first Toy Story film came out and received universal praise not only for its dazzling computer-generated visuals, but also for the fact that a touching story was included with it. It helped put Pixar on the map and revolutionized the way children's movies are seen, to the point where a non-computer animated film, even from the early '90s, seemed "nostalgic" as a result. So when Pixar went back to the well for a sequel, there seemed to be a little trepidation. I mean, a bunch of computer geeks couldn't strike gold twice could they? Little did we know at the time, it would be one in a series of well-received films from the studio that have given it its own identity, to the point where you see a Pixar opening credit and know you're going to be in for a ride.

Not only were the toys back in town, but those responsible for their success in the first film returned to boot. John Lasseter and Pete Docter put together the story that Lasseter co-directed with Ash Brannon (Surf's Up) and Lee Unkrich (Monsters, Inc.). Woody (Tom Hanks, The Green Mile) and Buzz (Tim Allen, Wild Hogs) both continue to be the top toys within the toy collection of a young boy named Andy, as he plays with both frequently. However, Woody suffers a rip in his arm when Andy plays with him before Andy goes to summer camp, and suddenly Woody begins to feel neglected, and even questions his importance as a damaged toy. When you mix Woody's quest to find Andy with the introduction of a new protagonist, in this case a toy salesman who wants to sell Woody to a Japanese museum, you've got your basic components for the story. 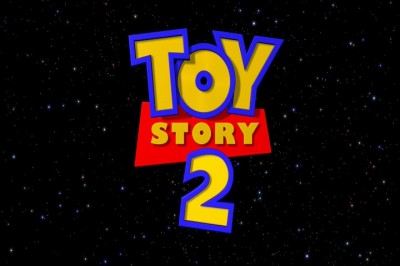 There are some new ingredients thrown into the mix as well. When Woody gets taken to the house of the evil salesman/collector, he finds out that he's part of a set of toys in "Woody's Western Roundup." There is Woody's horse Bullseye, the older father figure Stinky Pete (Kelsey Grammer, X-Men: The Last Stand) and Jessie (Joan Cusack, My Sister's Keeper). Pete and Jessie are all for bringing Woody into the fold; they have been long-neglected toys that are looking forward to the new attention in Japan. Woody is conflicted by this; he knows what other toys have been through, yet he's resistant to leave Andy for this somewhat sterile life.

To a degree, what makes Toy Story 2 so brilliant is that the Pixar creative team managed to retain the feelings that you experienced in the first film for this one. You couldn't help but flash back to the time when you were a kid, or you were treated so special by someone. That the feeling that you have in the first film. The second has more transition in it, and it's a transition from childhood into more grown-up settings. Woody wants to hold onto that childhood innocence for as long as he can, and that's not a bad thing. 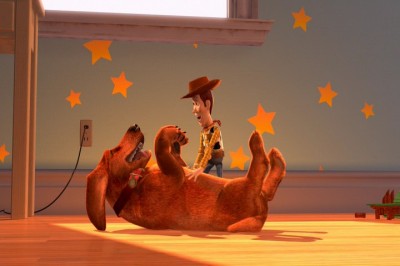 It helps when a two-time Oscar winner voices your main character. Pixar gives you a lot of imagery designed to laugh and tug on the heartstrings alternately, but looking at the films now, Hanks and Allen are perfect voices for the main characters, and the addition of Cusack helps give the film a new dimension and a worthy complement to the stars. This is in addition to the supporting cast, er toys, voiced by Don Rickles, Wallace Shawn and Pixar stock company member John Ratzenberger.

Overall, Pixar helped show the world that the first Toy Story film was no fluke. Because they had such confidence in the computer graphics, enough time could be spent composing the story, and they managed to elevate the storytelling game in the computer studio, with Randy Newman's "Jessie's Theme" (performed by Sarah MacLachlan) serving as a story technique that would pop up later in 2009's Up. They weren't bad storytellers in the first Toy Story film, and the second helped prove that the first wasn't fluke, that they were past being just a bunch of geeks, and the two movies serve as an excellent revisiting point for families young and old. 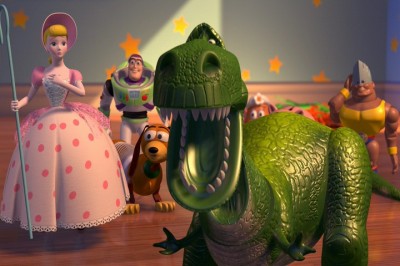 
Presented in 1.78:1 widescreen using the AVC codec, Disney releases Pixar in 1080p high-definition for the world to see, and it is a breathtaking disc. You know how you first watched DVD and it was like seeing a film again for the first time? Toy Story 2 gives you that same effect, with loads of color and detail that frequently looks multidimensional, particularly when Buzz and the other toys are trying to find Woody. The exteriors are flawless, with loads of depth and detail. Speaking of detail, we see small things like cheeto fingers more predominantly. Finer detail like the faux leather/plastic on Slinky Dog's ears is plainly visible as well. Disney/Pixar have done it again for their Blu-ray catalog, this is top notch stuff.


The DTS-HD Master Audio lossless 5.1 surround track is equally as revelatory, in that I was surprised how much subwoofer activity goes on during the feature. Then I realized, the toys are small and can't make noise that requires low-end usage, so just about everything else does; passing traffic, airplanes, car doors closing, all possess a little bit of extra oomph to them, as well they should. You also get to appreciate the smaller things the track offers as well. In the opening scene when the dog bursts into Andy's room, plastic Army men are sent scattering through the room, and through all of the speakers. That speaker panning is evident when required, and none of this action kills the dialogue in the film, remaining strong and balanced for the duration. To borrow a line from Tracy Morgan, technically the Blu-ray of Toy Story is worth taking behind the middle school and getting pregnant.


The extra material appears to be mainly pulled from the (2005 release, with a couple of extras thrown in as promotion for the upcoming 3-D film in the summer of 2010. When you look a bit further, most of the extras are replicated on the Blu-ray and on the second disc, which is the standard definition copy of the film.

Looking at the redundant extras on both discs first, you have a commentary with Lasseter, Unkrich, Brannon and co-writer Andrew Stanton to start things off. It's active and has lots of information about the production. They discuss the technology advances from the first film to the second and the intentions for the characters from then to now. They also explain the new characters and what their motivations are for them. The group loses a little steam a third of the way in, but they still manage to explain some of the scene inspirations and inside jokes a bit too. Not a horrible track by any means. 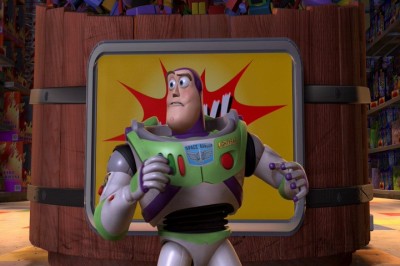 Moving on, there's a look at the new characters for Toy Story 3 and their inspirations, along with the actors who voice them for the film (4:00). "Buzz Lightyear Mission Logs" (3:43) appears to be a slight promotional piece for NASA, showing a Buzz toy at the International Space Station as the animated Buzz talks about the challenges of space travel. "Paths to Pixar" (4:24) is an interesting piece showing some of the technical artists discussing their previous career lives before discovering computer arts and Pixar in general. "Studio Stories" is a trio of recollections about working at Pixar in the early days, with voiceovers from the involved individuals (6:02). It's cuter than I just described it. "Pixar's Zoetrope" (1:58) shows the inspiration and creation of the device, while the longest feature of the bunch is a dedication piece to Pixar writer/director Joe Ranft (12:46), featuring interviews and recollections from Lasseter and others, and includes lots of film of Ranft while working with Lasseter or just generally goofing off. A commercial touting Disney's Digital Copy (1:00) rounds out the duplicate extras. 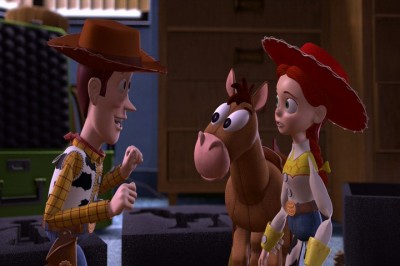 The other supplements are on the Blu-ray copy, starting with "Making Toy Story 2" (8:10), which covers much of the same ground the commentary did. There is a brief discussion about the allure of the characters and the challenges they face, but the topic is brief. A profile on Lasseter follows (3:02), along with the "Cast of Characters" (3:28), where the Pixar gang share their thoughts on the returning (and new) cast. Moving into the 'Toybox' section, there is an outtake reel (5:27) that still manages to provide a laugh or two, while "Jessie's Gag" (1:10) is an old Easter Egg included in easier viewing form. "Who's the Coolest Toy?" (3:19) includes cast thoughts on that very question, while "Riders in the Sky Music Medley" features the "Woody's Roundup" song in a music video-ish style (3:11). There is a 45-second still gallery of autographed headshots for the film's characters to close the section out.

Moving on, three deleted scenes (4:11) don't really do much for additional enjoyment, while 11 design galleries (16:43) cover various characters and exteriors. This doesn't count the dozen 3-D visualization galleries (11:02) or the three color design ones (4:30). The 'Production' section covers six different parts of the film in segment fashion (13:41), and explain a few more of the inside jokes in the film, with Lasseter appearing to help provide any requisite explanation. They also discuss the storyboard process and breakdown some of the more standalone sequences in the film. The 'Music & Sound' has four segments that focus on that (14:08), including a video of "Woody's Roundup" and a demo of "Jessie's Song." The 'Publicity' section has five smaller sections (8:32) which includes the trailers, TV spots, movie posters and the like. 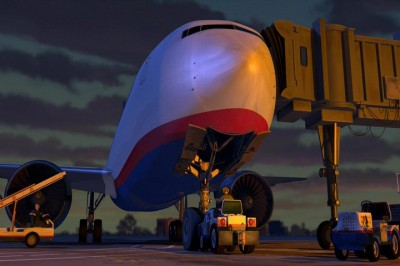 One quick note (aside from the obligatory 'screengrabs are from the SD copy of the film'), the Blu-ray disc is BD-Live enabled and the package itself comes with a code redeemable for a ticket for the third film, with the code being redeemed online.


Toy Story 2 is a winner; the film remains timeless, and technically there are few peers that can match its stellar audio and video quality. From a supplements perspective, if you're holding out for an exhaustive (re)UItimate Toy Box, you may be out of luck here, this is likely as good as we get. Nevertheless, technically it's worth the double-dip alone and a must for any Blu-ray player.