Blue Underground // Unrated // March 30, 2010 // Region 0
List Price: $29.95 [Buy now and save at Amazon]
Review by Stuart Galbraith IV | posted March 13, 2010 | E-mail the Author
Surprisingly, Vampyres (1974) is held in high regard in some horror-fan circles, this despite an extremely low budget, probably not much more than $100,000. It came at the tail-end of a brief but torrid craze for lesbian-themed vampire films - especially adaptations and variations on J. Sheridan Le Fanu's novella Carmilla - a sub-genre that began with Hammer's excellent The Vampire Lovers in 1970. Sadly Vampyres, variously also known as Daughters of Dracula and Vampyres: Daughters of Darkness, among others, doesn't really warrant such praise. Having seen just about every other entry in this short-lived sweepstakes, for this reviewer Vampyres falls somewhere near the back of the pack, despite a couple of interesting ideas and attractive women.

Blue Underground's high-def transfers generally have been excellent, but Vampyres disappoints here as well. The transfer itself is okay, but it looks like the label was saddled with inferior film elements, perhaps an IN (inter-negative) rather than an IP (inter-positive) struck from the original camera negative. In any case, the image is pretty soft and murky throughout. Some good if previously released extras accompany the Blu-ray. 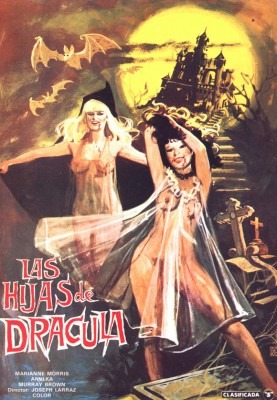 Fran (Marianne Morris) and Miriam (Anulka Dziubinska) are in bed together, making love, when a jealous male lover (Dracula? Fran's husband? Fred Phelps? We never hear from him again) bursts into their boudoir and shoots them dead.

Sometime later, in present-day Britain, John (Brian Deacon) and Harriet (Sally Faulkner) are on holiday and decide to camp out near a dilapidated mansion. Watching from the sidelines, the young lovers spy Fran and Miriam mysteriously luring men into the decaying estate, with Fran posing as a hitchhiker in need of a ride home.

Of course, the girls by this point are bloodthirsty vampires who after making love to the men drink their blood and afterwards ditch their victims' naked, bloody corpses, apparently with the idea of trying to make it look like they've been in some kind of road accident. (The local police don't seen particularly bothered by the ladies' obvious M.O. and never enter the story.)

Inexplicably, Fran becomes attracted to middle-aged Ted (Murray Brown) and rather than kill him and dump his body after a single night, instead makes love while continuing to suck blood from a cut in his arm night-after-night, keeping the man in a perpetual state of lightheaded confusion.

(Spoilers) There's really not much here. Inside their camper snoopy Harriet argues with John about the movements of Fran and Miriam but ultimately their characters serve no function in the story at all. When at the very end they become arbitrary victims I was left wondering what the point was of spending nearly half of the picture's 88-minute running time with them.

The idea of a bisexual female vampire becoming attracted to one of her victims, deciding to keep him alive while still feeding off of his body is an intriguing one, but the film doesn't explore or express this well. Is their attraction purely physical or also emotional? Or is his attraction purely sexual while hers is emotional, or vice versa? It's never clear because the characters hardly talk to one another and visually, neither through the performances nor direction is anything much to be gleaned. Indeed, the motivation of the characters is so opaque and confused were it not for the constant cutaways to the campers the argument could be made the film was being told subjectively from Ted's clouded state. As it is, the film makes no sense: Ted's flees the mansion but then returns for no clear reason. Like the two vacationers, he never propels the story forward and mostly just sits there and takes it from Fran, spending nearly the entire film looking like he's just given blood at the Red Cross but forgot to eat breakfast beforehand.

Perhaps chosen because of his performance the year before as Jonathan Harker in the Jack Palance TV-movie of Dracula, Murray Brown is painfully miscast. Freckly, sweaty with a 5 o'clock shadow and flabbily middle-aged, he tends to negate the eroticism generated in his love scenes with Marianne Morris, who is uniquely alluring. Raven-haired with black, shark-like eyes, she's quite fetching, and a good actress to boot. Dziubinska, billed here simply as "Anulka," was a Playboy centerfold but is more conventionally attractive, though her petite body makes a nice contrast to Morris's voluptuous one. (Personally I found Sally Faulkner more appealing than either Dziubinska or Morris; here the slightly wall-eyed, shorthaired Faulkner resembles actress and onetime Bond girl Carey Lowell.)

A surprising face, certainly in a picture like this, is Bessie Love, one of the great Hollywood stars of the silent and early-talkie period, who moved to England in 1935 and gradually resumed a film career after the war, albeit in small, sometimes uncredited parts in movies like On Her Majesty's Secret Service (1969) and Sunday Bloody Sunday (1971). She pops up only at the very end of this film, and has just one line.

Another surprise is the extensive use of Oakley Court as the vampires' lair. Best known for its appearances in numerous Hammer horror films and, soon after this, in The Rocky Horror Picture Show (1975), as seen here the building must have come cheap and genuinely appears to be in a distressing state of disrepair. (It's now a luxury hotel.) Amusingly, a couple of camera angles of the building are nearly identical to those in the later Rocky Horror.

As stated above, Vampyres is a bit of a disappointment, looking soft and murky. Partly this could be the lackluster cinematography, partly the film stock, etc., but the main culprit appears to be second-generation film elements which do not impress in high-def. The 25GB disc tries to compensate with 7.1 DTS-HD and 5.1 Dolby Digital Surround EX audio options, but that's going overboard with a modest little monophonic movie. (And in fact I found myself preferring the original mono track anyway.) Optional English, French, and Spanish subtitles are included, and the disc is region-free.

All supplements are ported over from a May 2003 DVD release. They include a nice interview (in SD) with Morris and Anulka, both of whom are still quite beautiful; an audio commentary with director José Ramón Larraz and Producer Brian Smedley-Aston; an international (high-def) and U.S. release trailer (standard-def).

Though disappointed with Vampyres, both the movie and the high-def transfer, as a fan of the genre I was still glad to have the chance to see it, and I'm confident Blue Underground did the best job they could with it given the available elements. It doesn't live up to its minor cult film reputation, but for fans of '70s horror films, it's worth a look. Recommended.