Shout Factory // R // August 3, 2010
List Price: $19.93 [Buy now and save at Amazon]
Review by Justin Felix | posted August 11, 2010 | E-mail the Author
The Tagline:
Lost River Lake was a thriving resort - until they discovered . . .
JOE DANTE'S CULT CLASSIC PIRANHA IS BACK IN A NEW COLLECTOR'S EDITION WITH NEW SPECIAL FEATURES! 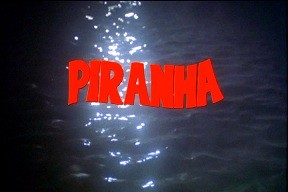 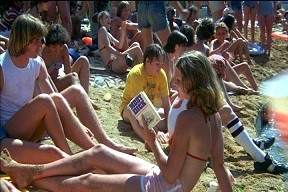 Piranha. This 1978 creature feature is one of many titles being released under the Roger Corman's Cult Classics banner by the home video distributer Shout! Factory. For those not in the know, so to speak, Piranha is a cult favorite in some circles; at the time of its initial release, it served as a riff on the very popular Jaws. Today, however, it certainly seems more like a template for the countless low budget killer-animal-on-the-loose popcorn films that litter home video and cable channels like SyFy. Regardless, Shout! Factory's release is well-timed, as Alexandre Aja's 3D remake is poised to drift into theaters in another week. And the home video company has again outdone themselves with this entry in their Corman line, as it sports a new anamorphic widescreen version of the movie and generous extras (more on these later in the review).

Roger Corman, of course, is the legendary elder statesman of exploitation cinema, a producer / writer / director of - literally - hundreds of low budget genre titles. He has been credited by many sources over the years as the person who has helped start the careers of many Hollywood talents. Corman, in fact, was just given an Honorary Oscar earlier this year at the Academy Awards for his lifetime of work. It's a little hard to say that and then transition into a discussion of the schlocky Piranha, which he helped produce, but even this example proves the overall point. Joe Dante, the director, would go on from this to make some very good films, including the werewolf classic The Howling, the popular Gremlins, and the criminally overlooked Matinee. (Seriously, if you haven't seen Matinee and you're a fan of monster films and / or 1950s nostalgia, definitely add it to your must-see list.)

In any case, unlike the concurrently released - and more salacious - Humanoids from the Deep, Piranha is a little more straightforward and linear with its plot and exploitation elements. After a teaser prologue with a teenaged couple becoming a late night snack for the titular piranha, the movie's action sort of grounds to a halt for a while as the main characters are introduced. Headstrong investigator Heather Menzies (Maggie McKeown), looking for the lost couple, engages the help of lonely, divorced, and bearded Bradford Dilman (Paul Grogan), and the intrepid duo go skulking about in an apparently abandoned military compound where they unwittingly release a bunch of ravenous mutated piranha into the local water system. There's some nonsense idea about the military trying to develop a new breed of killer fish for the Vietnam War effort. What's really important for the film, of course, is that the bad fish are out - and they're ravenous for anything that moves, including any unfortunate humans in the path.

There's a lot to like about Piranha. I appreciated its postmodern, referential in-jokes. When Heather is first introduced, for instance, she's playing an early Jaws arcade game. Later in the film, a sheriff can be seen watching the 1950s aquatic monster flick The Monster That Challenged the World (which, like Matinee, is another little film I'd recommend). And during the climactic encounter at a crowded beach, watch for a teenage girl in a bikini reading Moby Dick. What's also fun to see are the genre veterans cast here in supporting roles: the original Invasion of the Body Snatchers's Kevin McCarthy and Black Sunday's Barbara Steele, for instance, are two of the scientists linked to the piranha's creation. Dante would demonstrate a penchant for this kind of casting in his future work.

And, indeed, once this film gets going, it has a lot of manic creature feature fun. However, the two leads just aren't very credible - or interesting for that matter. It's not very clear why the young Heather would have any interest in spending time with Brad, a real Debbie Downer type of character. This makes the movie drag, especially in the first third of the film. And the fact that Brad's daughter has aquaphobia - well, that's about as silly a contrivance as Mr. Holland's son being deaf in Mr. Holland's Opus (talk about an "oh brother" moment in film).

Still, Piranha is definitely worth checking out - the killer fish revealed in quick cuts are fun to watch even after all these years. And with the aforementioned remake set to hit theaters, now is obviously a good time to give the original another look. Before I move on to the more technical portions of this review, I just want to commend Shout! Factory on its packaging for Piranha. The DVD insert is dual-sided, much like VCI's home video release of Horror Hotel. In addition, a cardboard slipcover offers a nice lenticular cover. At the moment, this cover's motion can be previewed at Shout! Factory's web page for this release here. An 8-page booklet can also be found inside with photos and an essay. Overall, this is a nice package, and I'd highly recommend this release to fans of old B-movie fare. 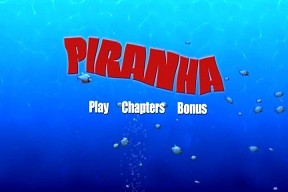 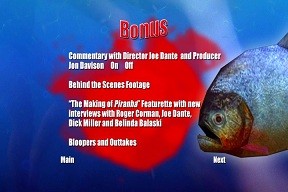 Shout! Factory presents Piranha in what they describe as a "new anamorphic widescreen version." The aspect ratio is 1.78:1, and the picture looks very good, with strong colors and sharp details.

Given the plentiful extras on this disc, I was a little surprised to see one lone audio track: an English language affair that provides some oomph to terror scenes but little else. This undoubtedly reflects its original exhibition, and regardless, who wants to hear the high-pitched shrieking that permeates the piranha attacks in surround sound anyway? No optional subtitles are provided.

Shout! Factory really delivers with the extras on this disc. First and most important is a feature-length audio commentary with director Joe Dante and producer Jon Davison. A random sampling suggests that it is an informative track.

Fans of Piranha will find a wealth of vintage extras. Behind the Scenes Footage (9:34) is fun, especially since Dante and Davison talk over this footage as well. Bloopers and Outtakes (6:47) offers what the title suggests, sans commentary. Additional Scenes from the Network Television Version (12:20) are presented in full screen. Radio Spots, a TV spot, a Poster and Still Gallery, and additional behind the scenes photos are also warehoused on this disc.

The Making of Piranha is a good new featurette with interviews from Roger Corman, Joe Dante, Dick Miller, Belinda Balaski, and others.

Finally, a Trailers submenu houses a trailer for Piranha with an optional commentary with producer Jon Davison, as well as a teaser trailer. Additional trailers for Humanoids from the Deep, Up from the Depths, and Death Race 2000 are also available.

There are some flaws in character and storytelling here, but once the creature feature mayhem gets into full gear, Piranha offers a lot of B-movie fun. With the 3D remake about to hit theaters soon, now is a good time to check out the original. Plus, Shout! Factory has done a fantastic job with the DVD's packaging and extras. Highly recommended.