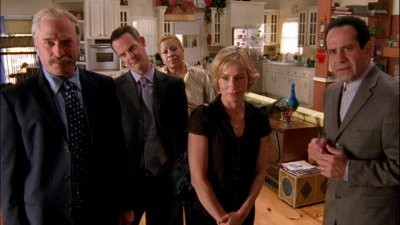 As an avid watcher of Monk, I was sad to hear season eight would be its last. However, I was pleased with how it ended. There was good closure for all of the characters and there were not unanswered questions left in the background as found with some series' finales. In addition, the final season continued to provide engaging and entertaining episodes. Fans of the series will appreciate this season in its entirety--its cancellation withstanding, of course.

The episode "Mr. Monk's Favorite Show" starts the season off with a fun tone. A murder attempt is made on Monk's favorite childhood television star. She is on the verge of releasing a book about her risque past. It is a fun episode, as Monk idolizes her and does not know about her sexual delinquencies. When he finds out the truth, his reaction is priceless. The next episode "Mr. Monk and the Foreign Man" is another strong episode. Monk makes an unexpected friend who's wife was killed in a hit and run. He takes on the case and it gets personal. He has problems seeing the lines between the man's dead wife and Trudy. Along the way, there are some good laughs as Monk tries to help the Nigerian native adjust to life in San Francisco. Of course, Monk's view of normal is a obscure.

As the season continues, there are a number of other strong episodes: "Mr. Monk is Someone Else", Monk goes undercover as a hitman and takes the role to heart, "Mr. Monk Goes to Group Therapy", Monk is forced to switch from private to group therapy and finds himself at the center of a serial killer, "Mr. Monk and Sharona", Natalie and Sharona clash on how to treat Monk when he investigates the accidental death of Sharona's uncle, and "Mr. Monk and the Dog", Monk is bullied into adopting a dog, who turns out to be his best friend. These episodes are samples of the hilarious and goofy cases/situations Monk and friends get involved in this season. The rest of the episodes are just as good, although the season's final episodes are the best.

Towards the end of the season, the episodes tend to focus on the series' story arcs about Trudy's death and Monk's return to the police force. In "Mr. Monk Goes Camping", Monk meets with the reinstatement board. Two of the panel members are very impressed with his progress and work. Unfortunately, the final member is not sure what to think about him. Natalie and Leland encourage him to "smooze" and get on his good graces. Fortunately, Randy is taking a group of kids camping and the son of the unsure member happens to be in attendance. It is a fun episode with Monk out of his element and in mother nature's. Of course, they stumble on a life threatening crime.

Iin "Mr. Monk and the Badge", he is reinstated as Detective First Class Adrian Monk. He quickly finds out life as a detective is not the same and has trouble adjusting. Nevertheless, the episode is a big development for the main hero. In the two-part series finale "Mr. Monk and the End", Monk finds out the truth about Trudy's death. It is a good episode and I really enjoyed how the case was handled and the subsequent developments providing closure to all of the show's regular characters.

Overall, Monk's eighth and final season provides a good conclusion to the show. While I was a disappointed the series came to an end, I really liked how it was concluded. I think the final episodes were very strong and offered solid developments for the characters, as well as the series' story arc. Fans of the show will not be disappointed with it. It is a lot of fun and will keep you entertained, engaged, and most importantly of all, laughing. 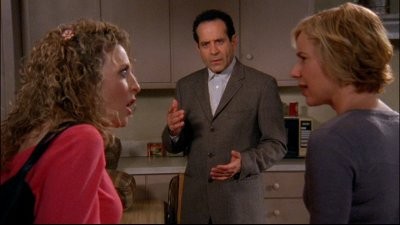 1. Mr. Monk's Favorite Show: It's a dream come true for Monk when he's asked to be a bodyguard for one of his favorite childhood TV stars, but the thrill is short-lived when increasingly violent attempts are made on her life.
2. Mr. Monk and the Foreign Man: While investigating a case of a murdered housekeeper who was bludgeoned to death, Monk feels compelled to also help out a visitor from Africa whose wife was senselessly killed during a hit and run.
3. Mr. Monk and the UFO: Monk's investigation of a dead hiker in the Nevada desert is severely hampered after he comes to the attention of a group of UFO seekers who think he has a link to a recent sighting.
4. Mr. Monk Is Someone Else: Monk reluctantly goes undercover as a hit man in order to foil an assassination plot but finds himself powerfully swept up in his tough-guy role and reluctant to leave the case.
5. Mr. Monk Takes the Stand: Monk is frustrated when a high-powered attorney attacks him mercilessly on the stand, but when he decides to quit being a detective, another unsolved murder case restores his confidence.
6. Mr. Monk and the Critic: Natalie is adamant that a theater critic is responsible for the death of a young waitress, but everyone including Monk believes she's just out to get the man after he gives Natalie's daughter a scathing review.
7. Mr. Monk and the Voodoo Curse: Monk is in a race against time to stop a killer who sends voodoo dolls to their victims, especially after Natalie receives one without a head in the mail.
8. Mr. Monk Goes to Group Therapy: Monk's insurance company refuses to pay for more individual counseling sessions, so he joins Dr. Bell's group where someone is murdering his fellow patients.
9. Happy Birthday Mr. Monk: Natalie schemes to surprise Monk and on his birthday, as he looks into a the mysterious death of a maintenance man.
10. Mr. Monk and Sharona: Sharona returns to San Francisco to deal with an inheritance related to her uncle's death which Monk believes was no accident.
11. Mr. Monk and the Dog: Monk becomes half of the ultimate odd couple when he adopts a scruffy dog while investigating the suspicious disappearance of its beloved owner.
12. Mr. Monk Goes Camping: Hoping to win over the lone holdout on a police reinstatement committee, Monk accompanies Lt. Disher and the man's difficult son on a camping trip.
13. Mr. Monk is the Best Man: Captain Stottlemeyer is about to say "I do," but before the big day Monk must find out who is making anonymous threats against the happy couple.
14. Mr. Monk and the Badge: Monk returns to work on the police force and finds it to be more challenging than he had expected when his first case involves a serial killer.
15. Mr. Monk and the End (Pt. 1): The most important investigation of Monk's life begins when a case requires him to return to the location where he learned of Trudy's murder.
16. Mr. Monk and the End (Pt. 2): Monk finally opens the gift that Trudy left for him and learns the truth about her murder, but his severe case of poisoning indicates that unless an antidote is found, he'll soon be joining her in the grave. 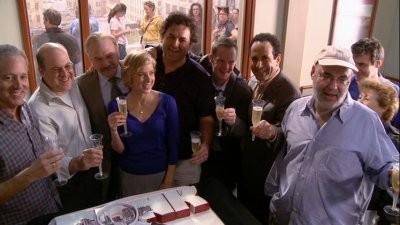 
Video:
The video is given in 1.78:1 ratio anamorphic widescreen color. Like previous season releases, the picture looks good. There are a few distortions in the picture during heavy movement and some minor compression artifacts, but nothing too bad. Overall it looks good.

Audio:
The audio track is given in English 2.0 Dolby Digital stereo sound. The audio track sounds clear and crisp, with a rather flat tone as the show is primarily dialogue. I found that the quality was more than sufficient and held to the same standards set by the picture quality. This release also has English subtitles. 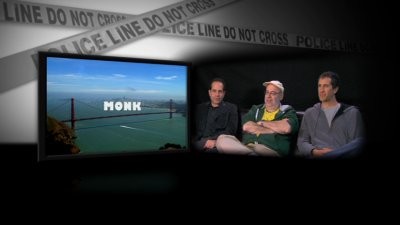 Final Thoughts:
Monk's final season is a solid way to end the series. The season as whole offers plenty of fun and hilarious episodes that are true to the show's nature. As the series comes to an end, the episodes start to focus on its main story arc. There is good closure brought to this storyline, as well for all of the main characters. It ends the show leaving you feeling good and not wondering too much about what will/would have happened next. Fans of the series will appreciate it the most. Like past season sets, it is Highly Recommended.