Sony Pictures // Unrated // February 16, 2010
List Price: $19.94 [Buy now and save at Amazon]
Review by Danny Cox | posted February 20, 2010 | E-mail the Author
The Series:
Writer's Note: Volumes six and seven were released on the same day so much of the review here is going to be the same as that of volume six.
Spider-Man is one of those comic book characters that has been a bit of an icon long before the feature films starring Tobey Maguire hit theaters. There were many versions of him on the small screen dating back to the sixties and I don't just mean in animated form either. Spidey was also in a live-action series that aired for three years in the late seventies but unfortunately it lasted only fifteen episodes. Yes, fifteen episodes in three years...you read that correctly. But it has long been the animated version of our friendly neighborhood web-slinger that so many have grown accustomed to knowing so well. Now in his seventh cartoon series; ol' web-head has changed a little bit and caught up with the times but we have a lot of the same as well.
As we now reach current time and find Peter Parker (voice of Josh Keaton) in a series entitled The Spectacular Spider-Man which comes from one of the numerous Spidey comic book titles seen over the years. Here we find Peter in high school where he deals with the troubles of everyday teenage life while also leading a life of fighting crime and keeping bad guys off the streets. Let's not forget that Peter also takes on a third lifestyle so to speak as he works for the Daily Bugle and the hot-head J. Jonah Jameson (voice of Daran Norris). Things are made a bit easier though since he merely takes pictures of himself as Spider-Man catching the baddies.
You'll find a great number of familiar faces in the different episodes and that especially holds true if you're a fan of the franchise as a whole (comic book, movie, or television). Rhino, Sandman, Venom, Doctor Octopus, and the Green Goblin are just a few of the many villains you'll find Spidey doing battle with. Aunt May, Mary Jane, Harry Osborn (for the time being), and Gwen Stacy are a handful of the good guy counterparts you'll find Spider-Man/Peter identifying himself with. The premise seems rather similar to a lot of things you've seen before, but the series does a good job of keeping the series entertaining for both adults and children. It also helps those that have never really paid close attention to Spider-Man because you don't need to know a lot about him in order to understand or enjoy the episodes.
The seventh volume of this series is a really good one in that it incorporates a ton of characters into just three episodes. Besides Spider-Man of course; these episodes bring close to ten other mainstream Spider-Man characters that are mostly well known and will thrill fans of the web-head. I particularly enjoyed "Gangland" as it pitted so many villains against one another in order for one common goal, but they still had to deal with Spidey in the meantime. The Spectacular Spider-Man continues to do a tremendous job of continuity from one episode to the next and keeping the series interesting for both small and big fans of Spider-Man.
Episodes
~ Accomplices: The crime underworld is up for grabs and it appears as if some of the super-villains will take one another out in order to gain control of it. Spider-Man really has a lot of work to do though when Silver Sable, Doctor Octopus, and Hammerhead battle it out in New York City to be the newest kingpin.
~ Probable Cause: Peter's school life is truly beginning to take its toll on him, but there is no rest for the young boy that leads a double life. A new set of villains called the Enforcers have come into town and threaten to make life a living hell for Spider-Man.
~ Gangland: Spider-Man must continue to battle it out against multiple enemies as there is no rest for the weary. A full-fledged gang war has erupted between Hammerhead, Tombstone, Silverman, and others as to who will be the new "Mr. Big" in town.
The DVD

Video:
All of the episodes are presented in 1.78:1 Anamorphic Widescreen format that looks really good as far as colors and brightness go. There are truly no problems to be found here whatsoever as the transition to DVD from television seems pretty flawless. 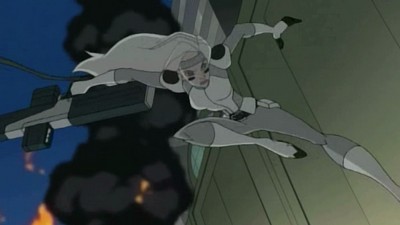 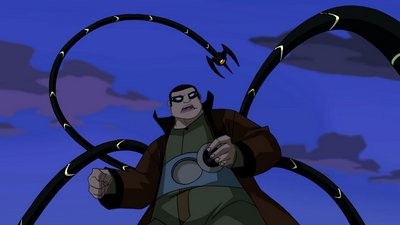