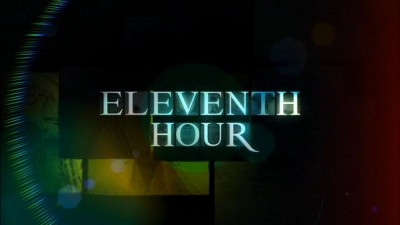 At the surface, Eleventh Hour does not bring anything new to television. The series is a somewhat typical crime drama with a mysterious twist. Instead of two tough cops, this show pairs up a brilliant scientist, who has many social inadequacies, and a tough female FBI agent. They solve crimes of a scientific nature. However, unlike typical TV melds of science and crime solving, this show is not big on the forensics like Bones or anything from the CSI universe. Instead it attempts a paranormal facade, which is similar to The X-Files' monster of the week episodes, although nowhere near as enjoyable. The fact of the matter is that Eleventh Hour falls painfully short of being a good show. It is surprising that it lasted eighteen episodes.

The series starts with the pilot episode "Resurrection". This first episode offers a quick and dirty insight to the entire show. The two main characters are Dr. Paul Hood (Rufus Sewell) and FBI special agent Rachel Young (Marley Shelton). Hood is a brilliant scientist with a knack for solving complex crimes of a scientific nature. Rachel appears to be just along for the ride. She typically cannot keep up with Hood and her primary task is to be his handler/protector more so than his partner. This first case deals with an odd DNA makeup in dead babies, as well as dead mothers. The investigation reveals that someone is cloning humans and Hood races against the clock to save a pregnant woman who is unknowingly carry a cloned child. This episode proved painful to watch. The plotline was weak and it left the characters uninteresting.

As the show's season continued, I admit it got better. Unfortunately, it did not get a whole lot better. I developed an appreciation for Hood. I think he makes a pretty intriguing character. The combination of his smarts and social inadequacies made him a likeable individual. Unfortunately, his partner Rachel never really stood out. She could have been replaced with a different agent each episode and it would not have mattered much. In fact, towards the end series' final episodes, another FBI agent was joined their merry band, but he did not bring any more depth to the show.

Despite liking one of the lead characters, the cases/episodes were far from intriguing. Typically, Hood and Rachel get word from the news or a call from local police about a string of mysterious deaths/illnesses. When they get on site, Hood uses his wits to pinpoint the problem. They race against the clock to stop the bad guy(s) and save the latest victim(s). There is not much more to it and there never seemed to be any developments to grab your attention and want more. Another problem is how farfetched some of the cases are. In a couple cases, it is just stupid.

Overall, I did not care very much for Eleventh Hour (if you could not tell from reading the review thus far). I love crime dramas and like the idea of one with a twist of the paranormal and science. However, this series failed to provide intriguing plotlines and consequently left little to be desired. The only positive aspect is the character Hood, who might have been better off with a totally different premise/co-star. In the end, there is not a whole lot to this flop of a TV show. If you skip it, you won't be missing much. 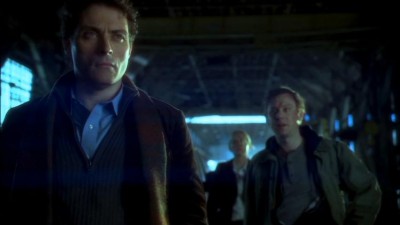 1. Resurrection (Pilot): Special Scientist Advisor to the FBI, Jacob Hood and his FBI partner, Rachel Young travel to Seattle to solve the case of nineteen genetically identical human fetuses that have been discarded.
2. Cardiac: Dr. Jacob Hood and Rachel Young go to Pooler, Georgia where three otherwise healthy eleven-year-old boys have died from heart attacks. Parents are nervous and the town is anxious to find out what's killing the boys.
3. Agro: Jacob Hood and Rachel go to northern California to investigate why almost an entire family ended up paralyzed and near death after eating breakfast.
4. Savant: When three autistic teenagers who had gone missing for a month return with Savant abilities, Hood and Rachel investigate what might have happened to them.
5. Containment: Cal Rigdon, an old friend of Hood's asks him to come to Philadelphia to help out with an outbreak of a mysterious infectious disease.
6. Frozen: Hood gets called in to help solve the mystery of a college co-ed who was frozen to death and will not thaw, despite blistering heat of the Los Angeles sun.
7. Surge: Col. Henry Brooks, with the Defense Advanced Research Projects Agency (DARPA), asks Hood and Rachel to investigate an experiment funded by his agency that appears to have gone horribly wrong.
8. Titans: Hood and Rachel head to a college campus in Oklahoma where two students have died of "the bends" but neither one was even in the water, much less diving.
9. Flesh: Hood and Rachel travel to Daytona Beach, Florida where two young men appear to have died after a wild night of partying.
10. H2O: When a number of people with no criminal history have bizarre violent episodes, Hood and Rachel travel to White Tail Hills, Texas to investigate.
11. Miracle: When Hood sees a late night news story about a boy who was "cured" by drinking spring water, he gets so incensed, he cajoles Rachel into joining him on an unofficial case.
12. Eternal: When it's discovered during a routine autopsy, that the dead man had two hearts, Hood and Rachel travel to Southern California to investigate the medical anomaly.
13. Pinocchio: Three genetically identical babies are discovered during an ICE raid at the Texas/Mexico border and they discover a fourth passport revealing a fourth baby was taken by a couple who escaped the raid.
14. Minamata: When a Milwaukee helicopter pilot/traffic reporter goes blind suddenly in the middle of a broadcast and crashes his helicopter, Hood and Rachel are called in to investigate this high profile mystery.
15. Electro: When thirty people are killed on one night after being hit by lightening, Hood, Rachel and Felix travel to Massachusetts to investigate.
16. Subway: When several people in Philadelphia fall victim to a what seems to be a nerve-agent, Hood, Rachel and Felix get called in.
17. Olfactus: Hood, Rachel and Felix are in New York during Fashion Week because of a series of murders in the fashion industry.
18. Medea: Hood gets inadvertently drawn into a case when a woman accuses an FBI Deputy Director of having fathered a child with her. 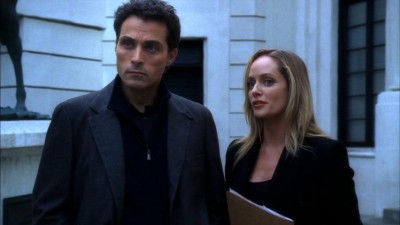 Audio:
The audio is given in English 2 channel Dolby digital sound. The track is dialogue driven and audible throughout the presentation.

Final Thoughts:
Eleventh Hour is a failed attempt at a crime drama. When I first started watching the show, I did not exactly know what to expect. However, I was excited to give it a try. The premise sounded like a good idea to me. Unfortunately, I quickly found little appealing about it. Beyond one strong lead character, the rest of the show fails miserably. My recommendation is to skip it.