Other // Unrated // Region 0
List Price: $19.95 [Buy now and save at Amazon]
Review by Stuart Galbraith IV | posted January 26, 2010 | E-mail the Author
A group somewhat redundantly calling itself Restored Serials Super Restoration Group has released The Green Hornet Strikes Again!, a 15-chapter serial originally produced by Universal in 1940 and in theaters early the following year. Like most serials, it seems to have fallen into the public domain and VCI, another label specializing in public domain chapter-plays, released its own restored edition of The Green Hornet Strikes Again! about six months ago.

I haven't seen VCI's edition of the film so I can't make comparisons. (However, you can read John Sinnott's review of that version here .) What I can report is that this Green Hornet looks okay, not great. Video and audio-wise, it's about average for a 1940s serial on home video, which is to say that it's far below the standard of, say, Warner Bros. or Fox and their classic titles on DVD, but for serial buffs used to sub-par presentations as the norm rather than the exception, this release comes off as perfectly acceptable. The show is on two "scratch-proof" discs and includes a few extras. 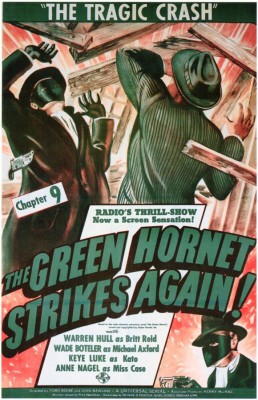 Today people know The Green Hornet mainly from the fondly remembered but rarely revived 1966-67 TV series starring Van Williams and Bruce Lee. But the masked crime fighter dates back to the glory days of radio, debuting on WXYZ radio in Detroit in 1936. Not coincidentally creators George W. Trendle and Fran Striker were also responsible for The Lone Ranger, another masked crime fighter often mistaken for an outlaw and who, in the radio series at least, was even related to The Green Hornet. (He was The Lone Ranger's great grand-nephew.)

In both the radio series and the serials, The Green Hornet is the crime-fighting alter ego of newspaper publisher Britt Reid, aided by loyal secretary Lenore "Casey" Case, bodyguard Michael Axford, and trusty manservant Kato.

The show's success led to The Green Hornet, a 1940 serial starring Gordon Jones (later Mike the Cop on The Abbott and Costello Show). For The Green Hornet Strikes Again! Jones, who was dubbed by radio Hornet Al Hodge, was replaced by Warren Hull, whose own voice is heard throughout. However, the other major players have been retained: Keye Luke, previously Charlie Chan's Number One son in the Fox/Warner Oland series, here plays The Green Hornet/Britt Reid's manservant/sidekick Kato; Anne Nagel is Casey, Reid's secretary; and Wade Boteler is back as Reid's stereotypically Irish bodyguard ("That Gren Hairnit A-gin!"), who's teamed up for most of the picture with his own sidekick, reporter Ed Lowery (Eddie Acuff).

(There seems to be some confusion over Kato's nationality. Kato, correctly pronounced "Kah-toe," is a Japanese family name, but in 1939 on the radio series the Japanese Kato suddenly became Filipino, while in the two serials he was Korean. Actor Keye Luke, who played him, was Chinese.)

In The Green Hornet Strikes Again!, Reid and his pals are up against a gang of racketeers led by Boss Crogan (Pierre Watkin). Wikipedia claims this was "unusual for a film serial in having mostly stand alone episodes instead of a continuous story," which would certainly make it unique but that's not really the case. It plays pretty much like every other serial, with the villain brainstorming one new scheme each chapter only to be thwarted by the Green Hornet (and his reliable gas-gun) time-and-time again.

As serials go this one is unusually talky, with less action and a lot of screentime burned up with footage of Crogan's henchman standing around their ringleader's desk, scheming and awaiting instructions, while in Reid's office his allies stand around his desk trying to anticipate Crogan's next move. By serial standards the plotting gets rather complicated, and the opening recaps, their angled crawl the basis for the later Star Wars movies, are especially wordy.

Hull (The Walking Dead), at this time an established serial star whose husky line readings reminds one of a young Burt Lancaster, is an improvement over beefy Gordon Jones. It's also fun to see Luke in a not-insubstantial supporting role, and typical of the longtime character player's career choices, is never a demeaning racial stereotype. Film buffs will note familiar faces like Nestor Paiva, Roy Barcroft, and Al Bridge in small roles, while prolific character actor James Seay has a juicy early role as one of Crogan's nastiest assassins.

Unlike other Universal serials, which rely on stock music from older, bigger feature film releases, The Green Hornet Strikes Again!, like the radio show that inspired it, draws mostly upon classic pieces, notably Nikolai Rimsky-Korsakov's famous "Flight of the Bumblebee."

I'm not saying Restored Serials Super Restoration Corp. ripped off VCI's version, but those expecting a razor-sharp restoration from original negative elements will be disappointed. The image is fine for general viewing but a tad soft with a few minor transfer issues. The image has been windowboxed throughout, which some film buffs prefer and others loathe. The discs are all-region and mastered on Armor DVD-Rs. The mono audio, reportedly Dolby, is adequate. There are no subtitle or alternate audio options.

Extras include a nicely reproduced pressbook with photos, advertising material, and a chapter-by-chapter plot synopsis.

This is a pretty good serial that looks okay here. I can't say whether VCI's edition is better or worse video-wise but this is at least acceptable. Recommended.