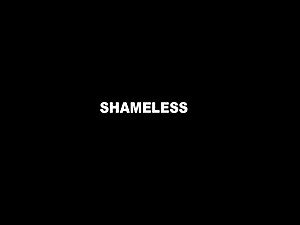 
The Movies
At one point, in one of his commentary tracks, filmmaker Yakov Levi notes that he never wanted to be Kubrick, and that he wanted to be John Waters. Thus, he never shoots for art when making his movies, he uses prostitutes and drug addicts instead of actors and he never tries too hard. The results speak for themselves, as you have a collection of films that are slapdash and unusual, with a healthy dose of WTF.

The packaging of these films as a collection of underground Soviet films is a conceit for sure, a reality that's revealed as you work through the disc's content. Levi is a Canadian tourist taking advantage of the financial difficulties in the Ukraine, and making bizarrely dirty films that fit well with the Troma mindset. The settings, accents and language offer a unique, distinctly low-country flavor to the movies that helps absolve their many moviemaking sins. For instance, instead of using a wide-angle lens, he just turns the camera sideways. It's stunning.

This DVD pulls together seven of Levi's movies, in no particular order it seems, to create a disturbing ride through low-budget shock horror. Oddly, there are special features tagged right onto each film, in addition to the material included separately.

Shameless - 7:26
What a way to start. If I was putting this DVD together, Shameless and the film that follows, Tasteless, would be toward the end of the disc, giving things a chance to build up to this horrid mess. The story of an old prostitute looking to make a few bucks is a game of oneupsmanship, as she takes on three guys with increasingly disgusting acts, before finding she's part of a family business.

The star of the show is the ho in the middle of it all, the terrifying and toothless Baba Alla, an old woman who will haunt your nightmares. Take away the things she does or the cackling laughter that echos in your head, and even just looking at her is more than enough to make you weep. She's a living special (monster) effect, a mess seen most readily in the close-up down into her throat. 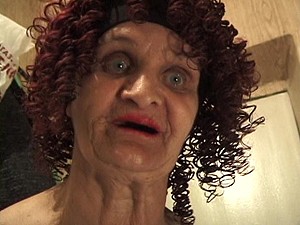 Special features: Fixing Sound (a look at the dubbing,) Deleted Dialogue, and Very Sexy Outakes (which are anything but.)

Tasteless - 7:42
Guess who's back for more? One of the guys from Shameless has ordered himself a prostitute, and unfortunately for him, and everyone else who's laid eyes on this film, it's Baba Alla. After some extensive ejaculation gags, more disgusting acts of perversion follow, including the birth of a baby from the hell between Alla's legs, lactation and the simple awfulness that is Alla.

Special Features: Alternate Ending (tying the film to Shameless,) a deleted scene, and a pointless shot of the escort agency.

Matroshka Dolls of Doom - 17:20
More effort probably went into the opening titles than any other part of this movie, but this is one of the better concepts in Levi's canon. In a seaside Ukrainian town, young tourists are disappearing, but that hasn't stopped three hot young women from visiting. But when they run into a crazy old woman with a massive collection of Russian nesting dolls (Alla again) they are in big trouble. The girls are pleasant to look at, and Alla certainly isn't, while the story is pretty obvious right off the bat. The thing that's really odd is the sex scene that makes up the big draw of the film, as it involves zero nudity, and not much sex. It's almost a parody of a sex scene. Things practically get interesting toward the end, thanks to some silly special effects. Without nudity through, there's not enough reason to check this film out.

Special Features: More Alla laughing (which should keep you up at night,) some goofing around

Penisella Pt. 1-4 - 11:25
Meet Penisella, a lovely young lady with huge male genitalia. That's basically the whole story. Over the course of the four shorts, she goes from playful to aggressive to sad to happy, which happens when she meets her soulmate. If you can guess his main attribute, I wouldn't be so proud. It's pretty damn obvious. The starring prop is amusing, but for lack of a better phrase, they don't do much with it. Though this is one of two films here in English, this one is dubbed, in a rather obvious way.

Lesbian Tales of Terror Presents The Ghost of Marquis de Sade - 19:48
Another entry in Levi's legend of movies about a trio of girls attacked by otherworldly forces, this one sees three young women bemoaning their lack of romance. In order to get some lovin', they decide to have a seance and channel a legendary lover: the Marquis de Sade. Naturally, the original sadist responds violently, leading to some ridiculous sexual assaults, including an extended, and eventually violent lesbian hook-up. The conclusion is actually somewhat inspired though, making it one of Levi's better overall movies (but still not very good.) At one point, you can see the wires on a special effect with such clarity that it's embarrassing. And again, no nudity (a point Levi makes fun of at the end.)

Vanity Insanity - 14:00
This may be my favorite Levi film, mainly because of the genuine story it delivers. Lena and Ksusha are roommates, but they are very different. Lena is a beautiful, outgoing, popular girl with lots of boyfriends, while Skusha is a bookish secret lesbian with a crush on Lena. Unfortunately, thanks to the new mirror she just bought, Lena is in love with only one thing: her reflection. It's practically a Twilight Zone episode compared to his other films, and Levi shows some legitimate ability as a filmmaker. That there's a scene with a cream-covered Lena writhing and masturbating on top of her mirror in her underwear doesn't hurt.

The Killer Bra - 20:37
A introduction and epilogue from Troma's Lloyd Kaufman makes sense, since he put Levi up to making this short to round out the DVD. It's easily his most complete film, as well as his best film, along with being the only one to feature a good amount of topless women. This tale of a possessed brassiere is amusing throughout, with plenty of revenge-motivated bra-slayings, and thankfully free of the gross-outs that populated the other movies. This may be Levi's last film, but incredibly, he should probably try to take another shot. 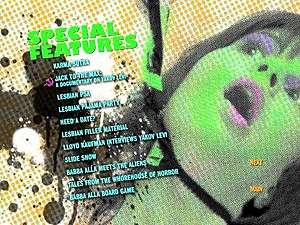 The DVD
The seven Yakov Levi films are packed onto one DVD, which arrives in a standard-width white keepcase graced by a nude, Wharhol-like image of Alla, which is obscured by a cardboard band around the case. The disc features static, full-frame menus, with an option to watch the films, check out the special features and watch previews. There are no audio options, no subtitles and no closed captioning.

The Quality
For low-budget, shot-on-video movies, they aren't bad, but there are a good deal of compression artifacts throughout, which can get annoying. Otherwise, the color is decent and the level of detail is moderately high as well.

The audio is presented in Dolby Digital 2.0, but expect nothing in terms of dynamic delivery or mixing. It's straightforward, simple and pretty clear.

The Extras
The massive stack of extras starts with audio commentary tracks from Levi on each film. He's got plenty to say, coming to the table with pages of notes, and is highly entertaining in telling the behind-the-scenes tales. No matter what you think about this movies, these tracks are a lot of fun to listen to, especially if you're looking for indie filmmaking tips from someone who's done it.

Once you dig into the bonus material, the amount is impressive, though only if you like Levi's films. Up first is Karma Sutra, a 7:26 unfinished short completed for the DVD. A pretty girl convinces her friends to let her hypnotize them into a past life to find out why they fight, only to get them to make out. It's pretty terrible, even in comparison to the others on this disc, though the pretty girl is one of Levi's better finds in the looks department.

Jack to the Max: A Documentary on Yakov Levi is equally bad, spending almost nine minutes on the story of a guy who masturbates too much, resulting in his anthropomorphic penis leaving him. I'd rather have found out more about Levi. A 4:35 interview between Levi and Kaufman thankfully reveals more about the guy, and is one of the better extras here.

A bunch of random clips are available to check out, including the "Lesbian PSA," "Lesbian Pyjama Party," "Need a Date?" and "Lesbian Filler Material," which run just over seven minutes in all. There's a lot of repetition in here, especially in the filler material, which can be found after Lesbian Tales of Terror Presents The Ghost of Marquis de Sade and without any nudity, they feel a touch pointless.

Some graphic material follows, including a short slideshow of stills from the sets of the films and other art, comic art from a Baba Alla comic and the Tales from the Whorehouse of Horror comic, and a Baba Alla Board Game. These can be hard to read, and are of limited value anyway.

The rest of the extras are film specific, starting with a trailer for Lesbian Tales of Terror Presents The Ghost of Marquis de Sade, which is followed by more than 12 minutes of interviews with the cast and crew of The Killer Bra, joyously conducted by Kaufman. From Vanity Insanity, there's 10:30 of audition tape, eight minutes of deleted scenes and a trailer for the film. Shameless, meanwhile, gets two trailers, plus a short look at the effects in the film. Tasteless, on the other hand, checks in with just a trailer, while Matroshka Dolls of Doom offers up more than 20 minutes of audition footage, a mildly amusing alternate ending, and the CGI-opening titles, this time presented in Russian.

Also found here are five Troma promos and credits for the disc.

On the Hunt
There are a trio of not-too-hidden easter eggs to find, delivering some oddball clips, including more of Baba Alla (which should probably just stay hidden) and some more Lloyd Kaufman. The cursors used are just as odd. 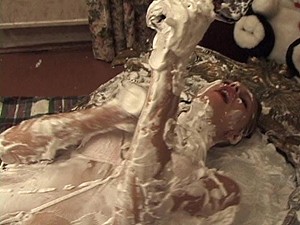 The Bottom Line
There's something about Yakov Levi that I like, but you rarely see that part on-screen in his films. More often, I see a guy obsessed with sex and disgustingness, a low-grade John Waters, minus the cleverness, but in spots, he seems like a filmmaker with promise. The DVD set is overflowing with content, and most of it looks and sounds as good as it possibly could, but you'd have to be firmly in Levi's target audience (i.e. you own several Troma DVDs) to want to purchase this disc. A rental will more than satisfy anyone's curiosity.