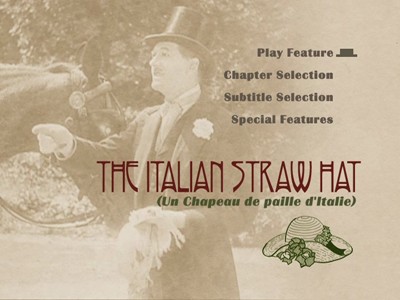 The day starts out innocently enough. On the morning of his nuptials, Fadinard (Albert Prejean) sets out in his carriage to go meet the wedding party, which has gathered around his wife-to-be (Marise Maia). On the way, a distraction causes him to be thrown from his buggy, and when he returns, he finds his horse chewing on a hat made out of Italian straw. A solider, Lieutenant Tavernier (Vital Geymond), emerges from the bushes and demands the hat be returned. Easy enough, except the horse has already eaten half the brim. A woman comes out of the bushes next. She is Anais Beauperthuis (Olga Tschekowa), and it's her hat. She is a married woman, and were she to return without the headpiece, her husband (Jim Gerald) would be suspicious. Lieutenant Tavernier demands Fadinard replace what his horse ate, his wedding be damned. Threats, misunderstandings, and comedic complications ensue.

That's the basic plot of The Italian Straw Hat (Un Chapeau de paille d'Italie), Rene Clair's 1927 farce. The silent film is based on a popular 1851 stage play, but Clair has transplanted the story to 1895 as a tribute to the year cinema first came alive. This affords him the chance to adopt the style and fashion from that year as a tribute to the founders of moviemaking. Whatever the inspiration, the results are hilarious.

As the bride's family gathers, Fadinard is forced to come up with excuses and explain his odd behavior. The soldier is threatening to trash his apartment if the groom doesn't defend his mistress' honor, and if Fadinard is caught with a woman in his room, that would be bad for him, too. How can he sneak away from the ceremony and find a replacement hat without it looking too bizarre? Relatives are piled onto the events, including a deaf uncle (Paul Ollivier) and a slovenly cousin (Alexis Bondireff), both of whom add to the difficulties. One of the funniest sequences in the movie comes when that cousin's wife (Alice Tissot) notices his tie has come undone while they are watching the wedding ceremony. She tries to signal her husband that he needs to adjust himself, but he just won't get it. Her constant gesturing sets off a ripple effect, and before she's through, every man but her husband is checking his own tie, including the justice of the peace.

It occurs to me that farce isn't really a style we're all that good at anymore. Though some recent comedies, such as Wedding Crashers and The Hangover, have farcical premises, they don't maintain the pacing that is required for a truly good farce. Perhaps it's just the nature of talking pictures, they feel the need to stop and take detours and insert some pathos; Rene Clair has no such concerns. The Italian Straw Hat is a true farce, each scene adding some new complication to the plot. The characters are trapped in a rolling snowball of miscommunication and misapplied logic. There is a reason these films often end with the mob giving chase. In this case, the bride's family descends on Fadinard's apartment while he tries to get the woman and her lover out before his in-laws or the cuckolded husband see them. And, of course, the police are going to show up.

Rene Clair has a wonderful sense of comic timing, and though he maybe lets some of the conversations go on a little long (a strange idea for a silent film), the playful invention that is a hallmark of his best films is also present in The Italian Straw Hat. Not only does he pay tribute to the origins of motion pictures, but he also gives a loving wink to the stage. When Fadinard finally explains his story to someone, we see how the desperate man envisions his plight: as a silly drama performed in front of a flat theatrical backdrop. Immediately following, though, when the listener begins to put the story together, his point of view is purely cinematic. His version of events features characters fading in and out, objects merging, and other clever camera tricks. It's a meeting of old and new, with Clair showing true reverence for both.

The Italian Straw Hat may be little more than goofball slapstick, but there's really nothing wrong with that. We all need a hearty laugh from time to time, and when the goofball is done this well, it never stops being funny. Not even 80 years later. 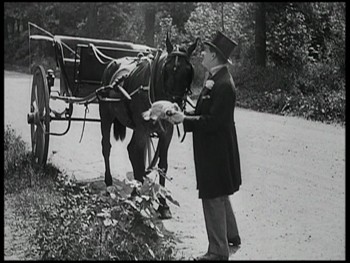 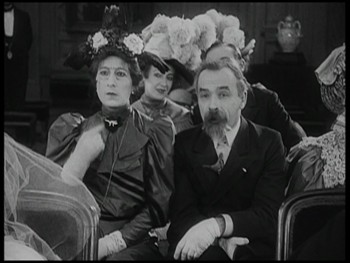 Video:
Flicker Alley have done a tremendous job creating a new full-frame (1.33:1) transfer of The Italian Straw Hat. The film had a whole reel cut out of it when it was first released in the U.S. in 1930, and there has never been a full version on video. The company has put together a complete print using a 35 mm negative from the U.S. release and restoring the missing pieces (20 in all) from a French print. The result is marvelous, the picture looks wonderful. Yes, there is some intermittent damage that could not be fixed--some flickering, some scratches, that sort of thing--but the basic image is always clear and the percentage of less-than-perfect footage is very slight comparatively.

The intertitles for the movie are new and presented in English. They look good, they aren't overly modern. There are optional French subtitles for those who want to read the original language. (Spanish subs are also available.) Interior shots of written letters are actually in English, too, and are from the original source, apparently shot at the same time as the French version in anticipation of the movie being exported.

Sound:
Viewers are presented with two choices for musical accompaniment for The Italian Straw Hat. One option is a full orchestral score recorded by the Mont Alto Motion Picture Orchestra and put together by Rodney Sauer, who studied notes about Clair's original musical intention (he used many pre-existing pieces) and tried to capture the comedic feel he thought the director was after. I prefer this to the piano-only score by Philip Carli, just because it was a more full experience. Either should make you happy, though, choose to go with your own particular mood. 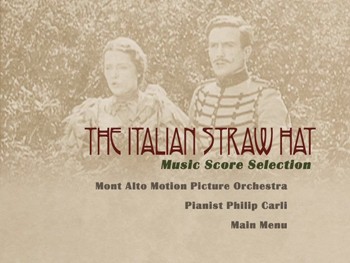 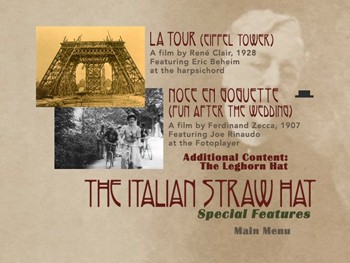 Extras:
The movie comes in a regular-sized case made of clear plastic. A 16-page booklet offers a variety of written extras, including essays about the film's history by Lenny Borger and a 1940 piece by Iris Barry, as well as notes on the score by Rodney Sauer. There are photos from the production, including pictures of Rene Clair on set, as well as cast credits, DVD credits, and notes about the restoration.

Other text-based bonuses include a 1916 translation of the original play, written by Eugene Labiche and Marc Michel. This is accessed via DVD-ROM, and it comes as a pdf. There is also a pdf of an old article on Labiche's vaudeville style. You can access them by loading your DVD in your computer and opening it like you would any file folder.

The video-based extras are two delightful short films. The first is by Clair, and it's a documentary called La Tour (The Eiffel Tower, 1928). In it, the director uses photos to show us the history and construction of the famous landmark, and then shoots his own remarkable footage of the interior. The second film is a 1907 production by Ferdinand Zecca called Noce en Goguette (Fun After the Wedding. This earlier film inspired Rene Clair, and indeed, the wedding party in this film looks an awful lot like the wedding party in The Italian Straw Hat. Together, these two short subjects run just over 20 minutes.

FINAL THOUGHTS:
Highly Recommended. The Italian Straw Hat is a fun and funny silent farce from master French director Rene Clair. Restored here by Flicker Alley, modern audiences can at last see the movie in its full running time, rather than the edited U.S. version that has been in circulation since 1930. A slapstick story of a bridegroom whose horse eats the wrong person's hat on the way to the wedding, The Italian Straw Hat is the kind of comedy that gathers laughs by piling complications on its hero. They just don't make 'em like they used to, this is a goofy good time. 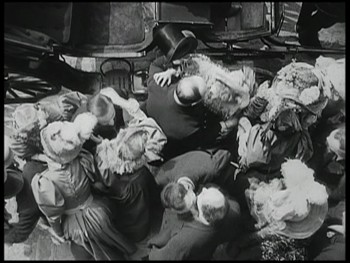 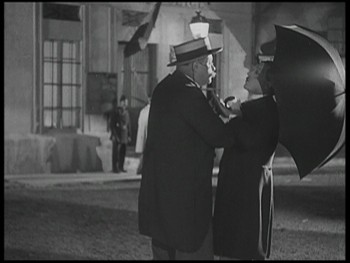