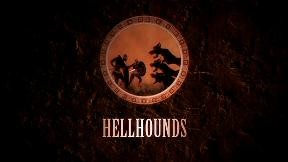 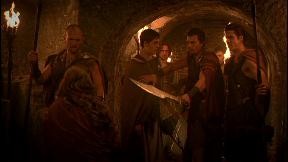 At the time I write this review, however, it appears that the website has not been updated for several months. I suspect some changes are afoot on the business level as Vivendi Entertainment's logo - and not Genius Entertainment - is now featured on the cover art. Whatever is going on behind the scenes, though, need not worry Maneater fans, at least in the short term, as there are a couple more titles in the series scheduled for release in the upcoming months.

In any case, Hellhounds strays from the standard Maneater template in only one significant regard: it is not set in the present day. Otherwise, it's business as usual: low production values and a flimsily-realized CG creature menace that bears the film's title.

Directed by Ricky Schroder (of television's Silver Spoons and NYPD Blue), Hellhounds takes us rather unconvincingly to ancient Roman (??) times, or at least a TV-movie quality facsimile thereof. Noble warrior Kleitos (Scott Elrod) marries the love of his life, Demetria (Amanda Brooks) - much to the approval of her father, King Leander (Ben Cross). Ultra-jealous Theron, a friend of Kleitos, however, does not approve and kills Demetria and her maiden friend right after the ceremony. Theron is sort of a comically melodramatic version of Shakespeare's Iago, and after a witch tells Kleitos that Hades now has his wife in the underworld (intending in three days to make Demetria his own bride) he joins Kleitos and his loyal band of warriors on a trip to Hades to rescue the princess.

What does this have to do with the titular hellhounds? Not a lot, to be honest. The first half of Hellhounds plays like a bad version of the old "swords and sandals" movies that used to sneak into Saturday afternoon television programming back in the 1970's and 1980's. Basically, Kleitos and his men roam around for a while, engage in some swordplay, eventually free Demetria from Hades, and figure out Theron's treachery. Back in the land of the living, they're chased around the countryside by Theron, who has been given command of Hades' hellhounds and seeks vengeance. The standard Maneater mayhem then ensues until the inevitably predictable conclusion.

As I suggested earlier, there clearly must be a fan base for this Maneater series, given its successful run - and I have no doubt that fans of these low budget exercises in creature feature runarounds will be entertained by Hellhounds. The historic setting provides a change of scenery, I suppose. And the actors are entertaining in a melodramatic sort of way, save for Amanda Brooks, who is listless even when she isn't supposed to be. However, the large dogs are awkward CG monstrosities just like every other Maneater antagonist I've seen. Paul A. Birkett and Jason Bourque's script is inane, with dialogue like "That's thoughtful thinking" permeating throughout. And while the action is fairly continual, it's fairly hokey in nature.

Rent it, if you're a fan of the Maneater series and like this sort of thing. (I can honestly say I've seen worse from the series.) All others can safely skip it. 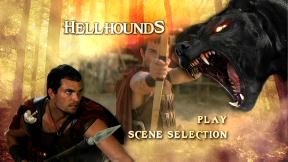 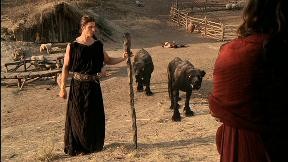 Vivendi Entertainment gives Hellhounds a widescreen presentation that the back cover art claims "preserve[s] the aspect ratio of its original television exhibition." The image is anamorphic. The quality is serviceable, though hardly exemplary. Details could be stronger, and colors seem muted.

The sole audio track is an English language Dolby Digital 5.1 affair. The mix is fairly flat, though dialogue is always clear.

Neither language nor subtitle options are made available.

The lone extras on this disc are for trailers of other entries in the Maneater series: the upcoming Carny, and the previously released Sand Serpents and Rise of the Gargoyles. These trailers precede the main menu and aren't accessible via the menu system (whose only options are Play and Scene Selection.

Hellhounds follows the standard Maneater Series template of fake-looking CG-animated creature feature mayhem that its fans will come to expect. The only major variation here is that it's set in ancient Roman times. Like the other films in the series, it's hokey and formulaic - but if you're into this sort of thing, it's worth a rental.