When I was watching the first volume of the public television show Primal Grill, I was a little put off by the way presenter Steven Raichlen handled himself, but despite that, I respected some of his barbecue recipes. Now, in the middle of February, with a couple feet of snow on the ground, it seems like as good a time as any to start preparing for the warmer months where red meat on fire is a good thing. Surprisingly, Raichlen has adjusted his presentation style a little bit, as well. 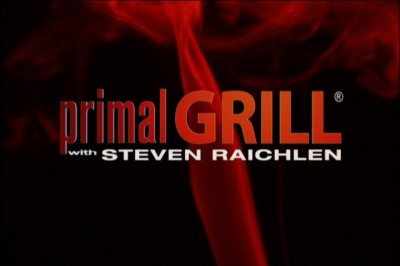 Primal Grill takes what viewers are familiar with from the first Volume and builds upon that for Volume Two. Or to borrow from the Primal Grill website, Volume One was the 100 level course, and Volume Two is the 200 level. There's not as much remedial coverage of things like smoking techniques or woodchips in this run of episodes. In fact, Volume Two of the series is shorter than the first, with five episodes as opposed to Volume One's seven. The episodes are:

"On the Bone" - Raichlen grills Korean short ribs, veal chops and an excellent leg of lamb.

"By the Sea" - Seafood is the focus, with shrimp, halibut and snapper done on the grill.

"From the Garden" - Vegetables get the grill treatment, including eggplant, portabello mushrooms and kebabs.

"In the Fire" - Eggplant for Baba Ganooj is cooked in the embers of the grill, and there's an intriguing beef tenderloin dish cooked in salt and oregano packaged in a white cloth.

"On the Rotisserie" - Rib roast and lamb ribs, along with a whole hog, are done on a spit.

Before proceeding, I should note that this isn't a complete run of episodes; Season Two of the show enjoyed a 13-episode run, so this is more the greatest hits, if you will. And Raichlen, who has written several books on barbecuing in various international flavors, seems to be more comfortable discussing the material this time Volume One gave me the impression that he's come out of the Burning Bush to kick some wisdom; in Season Two he provides some background information on the recipes for the unfamiliar viewer. 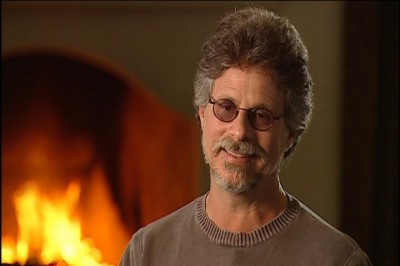 After becoming more accustomed to Raichlen, and with his seemingly more relaxed nature, the dishes seem easier to imagine attempting at home. As one who's a burger griller with occasional bouts of steak and chicken, I'd be willing to give the smoke-roasted leg of lamb or butterflied Korean short ribs a try. On a production note, the end credits roll over a blooper reel of gaffes and do-overs from Raichlen, further making the point that he's not so formal all the time--he's just like us!

Despite my initial apprehensions about Volume One, Raichlen takes what was learned in it and builds on it to enhance your grilling experience. I went from being annoyed to looking forward to what is to come in subsequent seasons, as he seems to be getting his television legs, which enhances the grilling experiences.


Like the first season, Volume Two Primal Grill is presented in 1.78:1 anamorphic widescreen, and it's not much different than its predecessor. Gone are the small edge enhancement issues and layer changes, and the southern Arizona resort where the show is shot gets a little bit of camera time as backdrop to some of Raichlen's grilling.


And like Volume One, Volume Two arrives with a Dolby Digital two-channel stereo track. It's pretty straightforward and without complaint. Some of the culture-specific music that accompanies a specific grilled dish do return, though it's quieter and a little less subtle. All of the action occurs in the front channels and sounds clear without any mosquito noise or other problems. Even the production crew is a little more comfortable in this volume.


Three bonus recipes from the second season are the only extras, and each runs eight to nine minutes. You can view the bacon-grilled pork loin, bourbon-brined pork chops and red wine marinated filet mignon for more grilling. The other episode listings and recipes are included at the Primal Grill website.


Volume Two of Primal Grill is definitely more suited to my grilling experience and the experiences of others, and it is recommended viewing for those who want to learn more about harnessing the power of the grill. If you're curious about Raichlen and in the mood to study up on grilling, check out Volume One before you get into this too deeply. Otherwise, this is a solid disc, minus the lack of all of its episodes. 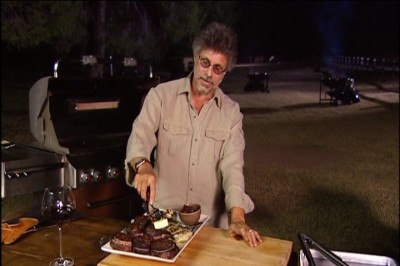