Long-haired high school pretty boy Mizushima (male model and actor Takumi Saito) is given Valentine's Day chocolate by new transfer student Monami Alucard. After taking a bite, he starts tripping big time and seeing disembodied circulatory systems walking around campus. That's because Monami is a Vampire Girl, and the chocolate contained some of her special vampire blood. Monami wants Mizushima for her own; the only problem is that Mizushima has already been claimed by Keiko (Eri Otoguro of Chambara Beauty), leader of a gothic lolita clique and daughter of the school's timid vice principal (Kanji Tsuda).

There are other cliques, or circles, at "Tokyo High School". There is the wristcutters circle, a group of girls that enjoys hacking up their arms with box cutters. Most outrageous, and no doubt most offensive (especially to Western audiences), is the "ganguro" circle. The girls in this club try to look and act black, with dark skin, huge lips and big afros. They worship "Michael" and Obama.

Keiko and Monami start to fight over the personality-less Mizushima. Even Keiko doesn't think he's all that - she explains to him that he just happens to be better than the other guys at this school (and we see her point). Unfortunately, one thing leads to another, and Keiko accidentally dies. Fortunately for Keiko, her dad is secretly a mad scientist, and with the sexy school nurse as his assistant, he has been conducting bizarre experiments in reanimating dead body parts. I'm sure you can see where this is going. Soon, Frankenstein Girl is born, and it's ON.

It would be wrong to approach this film expecting a horror movie. This is really a weird comedy punctuated with geysers of blood. Some of the comedy is subtle, such as the casting of bikini idol Yukie Kawamura as a transfer student who doesn't get noticed. Most of it, however, is about as subtle as an A-bomb. At one point, a girl uses her severed limbs as a helicopter propeller. The final showdown comes at the top of Tokyo Tower, as in so many anime.

Part gore flick and part parody of Japanese high school dramas and anime, Vampire Girl vs. Frankenstein Girl will be a hit with the right audience. It reminded me at times of Sion Sono's Suicide Club, but this is far less serious or pretentious. This is a movie that knows it's exploitation and just desperately wants to entertain. Unfortunately, it isn't entirely successful. The scenes with the school circles (especially the horrifying "ganguro" circle) and the mad scientist and the sexed-up nurse go on too long, taking the focus away from the titular vampire and Frankenstein girls. 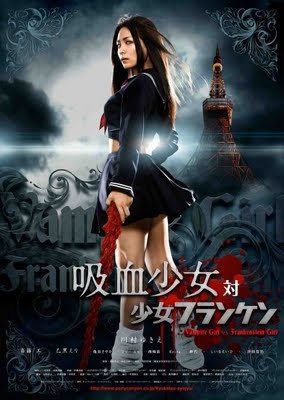 NOTE: This is a region-free PAL DVD released in the U.K. It will not be playable in some DVD players sold in the U.S. A player capable of playing back PAL format discs is required.

Vampire Girl vs. Frankenstein Girl sports a mostly pleasing 1.78:1 anamorphic widescreen transfer. To me, the colors look a little too "hot", with flesh tones not looking quite natural (somewhat orange-ish). This may have been intentional, but I can't say for sure. When you consider that this movie probably had a very small budget, it looks suprisingly good.

The only audio track here is a Dolby Digital 2.0 Japanese track. It gets the job done, but it's nothing special. There are a couple of cheesy pop songs that sound nice and clear. English subtitles are available and can be turned off or on.

The only extra is the trailer for the film. It is anamorphic and subtitled in English.

Vampire Girl vs. Frankenstein Girl is similar to other recent Asian "extreme" offerings released in America by Tokyo Shock like The Machine Girl and Tokyo Gore Police. The latter was directed by Yoshihiro Nishimura, the co-director on this film, and he finds a cameo here for that film's star, Eihi Shiina (better known as Asami in Takashi Miike's infamous Audition). Followers of Japanese pop culture (and gorehounds) are far more likely to enjoy this movie than casual filmgoers.