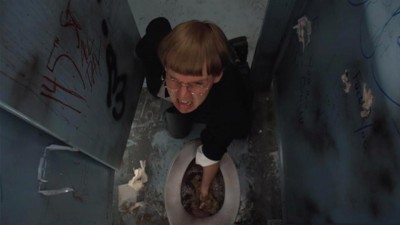 There appears to be a trend developing where comedy troupes of dubious cult fame leap to the big screen without actually being invited. Remember the excitement of the first Monty Python picture? Or the curiosity about what the Kids in the Hall were going to do with a feature-length running time? These days we have Broken Lizard, The Whitest Kids U' Know, and now Derrick Comedy, a band of jesters known for their YouTube accomplishments -- flashes of sketch comedy wedged between kitten videos and backyard movie parodies. "Mystery Team" is Derrick's initial foray into feature films, and is perhaps the first comedy I've encountered where the film seems better off without anyone trying to be funny.

Master of disguise Jason (Donald Glover, "Community"), nerd Duncan (DC Pierson), and dim-witted muscle Charlie (Dominic Dierkes) make up The Mystery Team, a trio of high school detectives coming to terms with their maturity after their crime-busting heyday as kids. Faced with dwindling cases and little use for their gee-willikers attitudes, the gang is pulled back into the sleuthing game when a little girl hires them to find a murderer. Entering an underworld of drug dealers, shady business practices, and strippers, the boys find their chipper attitudes just might not be enough to crack the difficult case.

"Mystery Team" enjoys such a goofy, perfect little premise, it's a shame Derrick Comedy goes to great lengths to screw it up. The idea of "The Bloodhound Gang" facing a harsh community of violence and salty language opens up a world of comedic possibilities, offering primo opportunities for slapstick and sly silly stuff, playing up the sublime concept of everlasting innocents in way over their heads. Derrick Comedy would rather be gross and infantile, staging a routine of crass and witless sequences that reduce the film to tiresome cult comedy mechanics, clumsily scripted by the three stars. 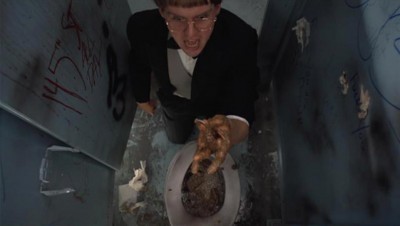 It's easy to lunge for the gross-out gag, and "Mystery Team" is all about refusing to make a greater effort. Here we have little kids cursing for shock value, various vomit jokes, breast milk fetishes, erections, and a moronic sequence where Duncan must retrieve a ring (ejected from a stripper's vagina) from the bottom of a toilet teeming with goopy fecal matter. Derrick Comedy is stretching to be irreverent, but their imagination is limited to forced bits of ugliness, killing the satiric aim of the material and its ultimate lean toward authentic character development in the second half.

Director Dan Eckman doesn't have much of a handle on the picture, spending more time staging needlessly fidgety camera moves than he does throttling the shrill tone of the performances, with most of the actors mistaking the intimacy of film for a stage performance in front of a live audience. Glover is the worst offender, aggressively pitching the whimsy of man-boy Jason to the rafters, bellowing lines and burning through facial reactions in a manner typically reserved for a Kabuki Theater audition. The troupe lays the overgrown innocence bit on thick (the boys guzzle chocolate milk, carry slingshots, and charge a dime for their services), leaving the picture with a single joke it doesn't manage particularly well. Also of piercing headache note is Bobby Moynihan, here as the team's convenience store employee supporter and deliverer of ice cream sandwich reassurance. How could someone so funny on "Saturday Night Live" be so cancerous on film? 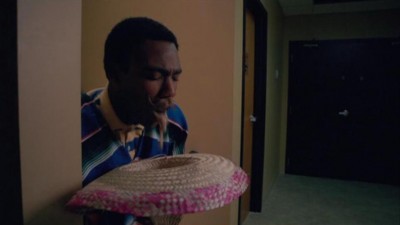 Presented in anamorphic widescreen (1.78:1 aspect ratio, windowboxed), the image quality jumps around quite a bit on this DVD. Attempting to display the contrast between an idyllic suburban world and the harsh reality of city life, the cinematography leaps back and forth between bouts of softness and crispness. It can be a little discombobulating at times. Colors are generally treated well, with primary hues enjoying extra attention, and skintones are generally settled. Black levels fail to properly communicate mayhem in lower light scenarios, with a few sequences lacking needed clarity.

The Dolby Digital 2.0 sound mix is straightforward and eager, pushing everything up front to create a pleasing wall of sound environment. Dialogue is always easy to follow, blended well with scoring cues and accentuated atmospherics. The comedy is better served by the blunt sound mix, with overt directionality surely confusing the limited budget ambiance here.

The feature-length audio commentary with Derrick Comedy (Dan Eckman, DC Pierson, Dominic Dierkes, Donald Glover, and Meggie McFadden) is a mixed blessing. On one hand, you have an animated comedy group happily exploring the creative process of their first movie, drunk on accomplishment and ready to share all the tricks of no-money New Hampshire filmmaking. On the other hand, there are five indistinct voices often talking over each other, trying to out-joke the room. Fans of the film should find plenty to enjoy, especially when the gang talks up the trials of shooting in one another's homes and yards.

"Making 'Mystery Team'" (6:22) is a short taste of the production effort, with a generous amount of BTS footage capturing life on the film set. In fact, it's too short, only providing a superficial view of challenges and triumphs.

"Deleted Material" (4:07) is a hodgepodge of excised moments -- not scenes, just tiny samples of jokes and improvisations that didn't make the cut.

"Pre-Production Test Scene" (2:25) is a rough version of the film's opener, shot without the benefit of costumes, make-up, and professional camera equipment.

"Who is Wally Cummings?" (5:57) is a joke featurette detailing the personality and career of the acting veteran (actually Glover with a ridiculous mustache).

Oddly, once the mystery of "Mystery Team" heats up in the third act, the material steps away from crude jokes, instantly reviving the film's appeal. I enjoyed these characters in sleuthing mode, sneaking around gathering clues and narrowly escaping ridiculous danger. The actors seem more suited to the business of subtle jesting and surprise than monotonous splashing around, begging on bloody knees for chuckles. "Mystery Team" finds genial inspiration when the whole endeavor is dialed down to a dull roar. However, something about this comedy has to be fundamentally wrong when its finest moments are the dramatic scenes.